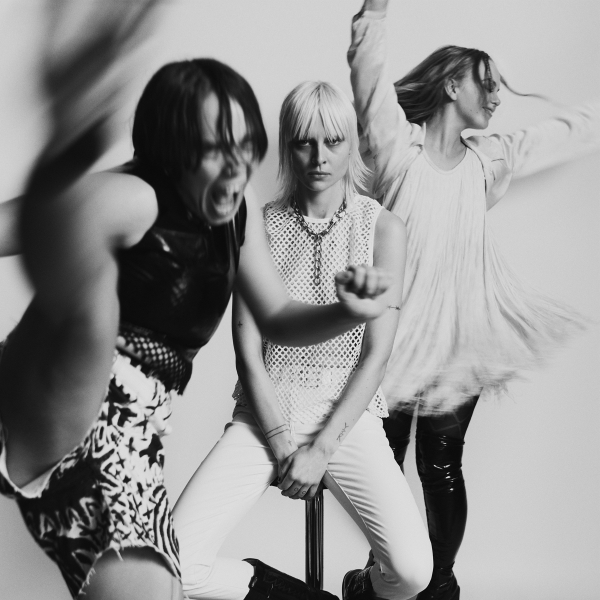 So When You Gonna… is both an invitation and a dare.

Dream Wife is a band built on guts – an art school experiment that turned into something special, because they wanted it to and dared to run with it. Whilst not as loud or as brash as their self-titled debut, So When You Gonna… is a record that shows Dream Wife bolder than ever, asking questions and opening doors that few are willing to look at. It asks you what you want and challenges you to go after it.

The opening track, and lead single, "Sports!" is a playful ode to moments spent together in between writing the record, as well as a satire on the seriousness with which people approach sports, with vocalist Rakel Mjöll toying with clichés of sport-talk, singing “dropping balls / missing goals” and “do you even play this sport?” – sarcasm dripping from every word. It’s heart lying in the classic sexist condescension of men explaining sports to women.

"Hasta La Vista" is more subdued in tone, but equally delightful. “It’s about accepting and embracing change and being thankful to what was and what is today” explain Dream Wife, something they found themselves grappling with when returning home after seemingly endless touring in 2018. It’s a far poppier song than any of their previous output – less riot grrrl, more Blondie – but with a very Dream Wife groove. As they sing “hasta la vista baby / ciao / goodbye now”, it feels like a clearing out of old patterns, and a quiet thank you to those same things.

"Temporary" is the warm, emotional peak of the record – it’s a tender song written for a friend of the band who had a series of miscarriages. Mjöll softly sings “know I’m here with a full embrace”, holding loving space for that grief, whilst also gently assuring that “you're brave to jump back into it” and hold onto hope after heartbreak. The band ask intimate, unanswerable questions of “how is it to love and live” when that being is so temporary, inviting listeners to explore their own experiences of loss – whatever that may be.

It’s the album’s titular track that stands out. Coming in fast screaming “WHEN YOU GONNA KISS ME?” – a true punk song, both in sound and sentiment. The band say it is about “wholehearted consent” and “communicating your desires” rather than remaining timid and quiet about what you’re feeling. They are unabashed in expressing their attraction, singing “words begin to fall out of your mouth / what a lovely mouth” and in asking for more. “Pull me closer (just a little bit closer) / by the waist and move me higher up” – it’s direct, specific, and unapologetic for it.

There are one or two slightly lacklustre moments, such as "Hold On Me", which doesn’t feel like it belongs, but they are far outnumbered and outshined by the groove of songs like "Old Flame" and the smart, questioning lyrics of "Validation". It’s a record that challenges complacency – in our personal lives, and in the wider world – and reaffirms Dream Wife’s ‘girls to the front’ ethos. Whilst not as wild as their previous output, So When You Gonna… is as topical and as empowering as the band have ever been. “Fuck sorry / fuck please” when are you going to go after what you want without apologising for it?