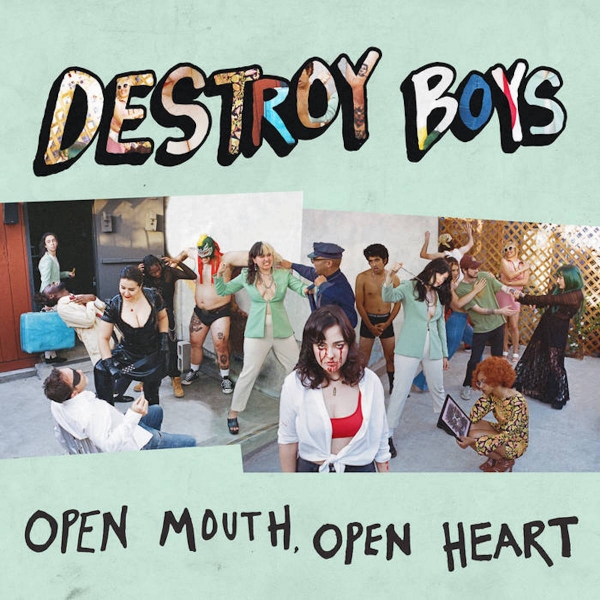 We’ve come to recognise and appreciate the rip-roaring snarling tenacity of Sacramento-based rogues Destroy Boys. Each teething caterwaul and creak of feedback can easily be identified as something that’s theirs, something that is aching and dripping with a snark as potent as arsenic. While they continue to bite the blithesome hand that feeds in their third release Open Mouth, Open Heart, their ingenuity is distilled in what appears to look like an album of first times. While this is a liable opportunity for rookie mistakes and error to fester, they’re close to ripping the hand clean off.

With guitarists / vocalists Violet Mayugba and Alexia Roditis quarantining together with drummer Narsai Malik; the band had to change the way that they write and record, let alone configure the way they want to transform west coast punk. Another first marks a celebration for Latinx representation for not only the band but for the genre’s revival, with the acoustic quirk of “Lo peor” and the absolute scorcher “Te llevo conmigo” being recorded in Spanish. “I haven’t heard many metal songs in Spanish, so I was excited to write it”, notes Roditis, while she celebrates her Hispanic heritage and honours a bilingual family she has never met.

The leading single “Escape” effortlessly finds the equilibrium between the band’s suave lethargy and thrashing restlessness. While it may read as an epitaph to the 18-month long death of live music, the track was written pre-pandemic by Roditis. However, we’re reanimated by the vocalist’s storming lows and shrill highs. There’s something very reserved about the grit brought to Open Mouth, Open Heart and I’m generally unsure if this is at fault for the band. The sonic aloofness definitely makes the band’s hooks pop in a way we haven’t heard before — specifically on opener “Locker Room Bully” and the stomping “Drink” — but it makes us question: is the band’s brand of effortless coolness really that effortless?

The ‘riot’ in riot grrrl seems misplaced across the tracklist. “Muzzle” is an instrumentally solid cut that’s vocally muzzled and sedated. Literally and figuratively, the one-minute long track leaves us itching for the galvanic rush we associate with Destroy Boys. The glimpses of vulnerability we catch across the album, namely through lofi transition track “Bob” and Roditis’ mid-track diatribes about isolation and disillusionment are not at fault here in this circumstance, but the passion visible within these segments renders these musical weak points furthermore vulnerable, and not in the celebratory way.

Open Mouth, Open Heart has highlights that clamour and excite, bringing a fresher energy to a sophister release. But with sub-par pacing, the band takes a step forward and two steps back when they can easily move ahead.