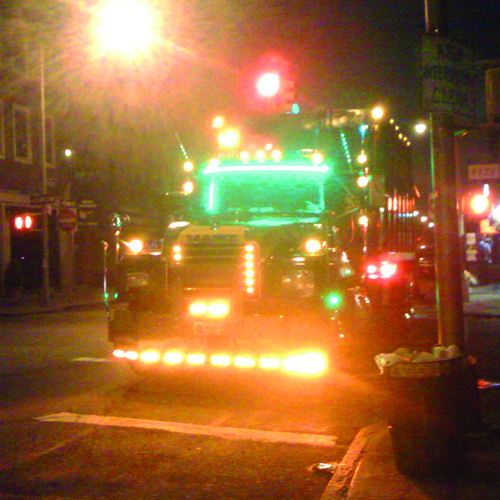 Eighteen years in, there’s not much left to say about Deerhoof. That’s not because the band are big to the point of ubiquity, but rather that their sound and philosophy in making music are immediately recognisable for their lack of cohesiveness. They are avant-garde. They are pop. They turn four-minute pop songs into mini-suites. They close albums with twelve-minute prog jams. They throw Matsuzaki’s pipsqueak vocal up against crushing slabs of rock riffage. They make heavily hyphenated music. Imagine Dirty Projectors without the worthy world music signifiers and with a good dose of comic book Technicolor joy and you’re pretty close.

And yet, as soon as you affirm something about the band, the opposite threatens to become true. According to a statement on the band’s bandcamp page by drummer Greg Saunier, Breakup Song is “a sensational record of Cuban-flavored party-noise-energy music” (note the hypens). It soon becomes clear that “Cuban-flavoured” is meant in the same way as a supermarket own brand might describe something as “beef-flavoured” to disguise that the product has little beef in it. But still, ‘There’s That Grin’ smoothly flips the briefest snapshots of Latin jazz into its crapped-out funk amble, ‘Flower’ fizzles out on a brief mambo-style coda, while ‘The Trouble with Candyhands’ makes a more forceful claim to Cuban-ness by splicing layers of scuzzy guitar in and around a swinging horn section. Elsewhere the odd bit of brass intervenes, but never in a way that’s massively different from your typical Deerhoof collage. For the most part, Breakup Song is your standard party-noise-energy music album.

So what of the noise? Well, there’s noise and there’s noise. Opener ‘Breakup Songs’ lurches between a detuned drum pattern and pneumatic drills of guitar fuzz, the only respite coming during a clearing of slightly softer drums and unclassifiable murmuring telecommunication noises in which Matsuzaki gratingly chants “anyway, anyway” over and over. ‘Bad Kids to the Front’ wrecks its own steady momentum with flashes of a keyboard riff, highly-strung and tinny, that eventually overwhelms the song. Often Breakup Song sounds more like a threat than a invitation to mischievous fun. Given how confrontational and abrasive the album sounds, Saunier’s childlike invitation from that same bandcamp statement – “stick with us and the bad guys with guns will never catch up” – makes you wonder how awful the alternative really is.

Of course, in their prime, Deerhoof were never that different. The difference between Breakup Song and something like the brilliantly madcap Friend Opportunity is only a matter of degrees. And so a kind of Stockholm syndrome develops where you try and will the tracks into greatness because why else would they appear so strange, so irritating at first? The band have always constructed music like palimpsests – tracks where every previous draft, every half-thought-out doodle is left in underneath the finished article – and so listening to undercooked tracks like ‘Mothball the Fleet’ and ‘Zero Sounds Pause’, a track which jumps around from guttural bass and trance-y Close Encounters-style synth to clear-water acoustic guitar arpeggio, feels like staring at pictures so incoherent you presume they must be magic eye tricks, and so you stare and stare and stare, waiting for something to reveal itself.

But there’s not much joy or much that’s really engaging in Breakup Song. Deerhoof have often been characterised as a band with ADD or at least on a sugar rush, and in this sense the record is the lethargic, confused flipside, or the groggy come-down after the medicated high. As with a lot of their work post-Friend Opportunity, there are faint echoes of what made the band great, but that’s all there is. They’re going through the same motions, playing with the same tools, but for the most part Breakup Song is like finding yourself grimacing at something that sounded so sweet the night before but, in the cold light of day, is now just nagging noise.