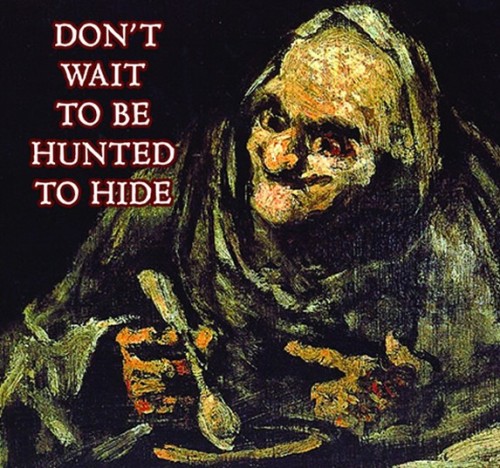 By the time you read this, David Cronenberg’s Wife’s Don’t Wait To Be Hunted To Hide may well have provoked a tabloid-style reaction, but they may also unwittingly have generated a new-folk subgenre. Let’s just say that London-based “dark folk” stalwarts are revelling in evil again on their latest album. Warped sexuality (predominantly male) is a recurring theme with the band’s frontman Tom Mayne. His songs about rapists, paedophiles and assorted sexual predators, generally sung “in character” in the first person, are hard-hitting, shocking, harrowing even, like some gritty Shane Meadows social drama, but the music would surely lose its edginess if it relied on shock value alone. Mayne sneers like some half-crazed Tim Burgess or Mark E. Smith, the vocals often deliberately distorted, and the band play with the same sort of dark intensity as The Creeps or The Fall, a sinister-sounding bass only adding to all the evil on show here.

To be clear though, Don’t Wait to be Hunted… doesn’t pull any moral punches. Any humour is the darkest imaginable, there are certainly no Jarvis Cocker-type” awkward sexual encounters” in the events unfurling before our ears. Mayne has wisely made it clear in interviews and press releases that the songs aren’t meant to condone or glamorise the behaviour of his characters. These people are depraved, pure and simple. Worryingly, the tunes are catchy enough to sing along to and there’s actually nowhere to hide as the songs draw you in.

The titles in the near-instrumentals ‘Pain Ahead’ and ‘Man At The Back Of The Woods’ are repeated ad nauseum with the band cranking up the intensity until the listener is bludgeoned into submission, but these are mere preludes for what follows. ‘Spiked’ , for instance, is the story of the date rapist who drugs his victims and then pretends to have half a conscience (“Now I’m a kind man, didn’t think I’d go this low/But somehow my ‘yes’ outshined my ‘no’/Can it be a crime if she doesn’t know about it?/And did it hurt with me inside her?/Well, I truly doubt it”). All set to a sinister musical backdrop, very dark, creepy and singalong … oops! Morbid ballad ‘Love Is A Headless Dog’ seems like some seedy take on ganglands violence (“I hung a headless dog to your window/Stabbed a note through its side/Written in capitals and red biro/’There won’t be a next time’”). ‘The Pied Piper Of Maidenhead’ is another dangerously catchy song about a serial offender looking for easy teenage sex on a drunken Saturday night. He drags them off to parks, under bridges or down back alleys “willingly”. The style is creepily Jack-The-Lad, but even more oddly, sounds like Chumbawamba’s ‘Tubthumper’, with the words half sung-half told as Mayne’s character tries to inject some jocularity into his twisted behaviour (“Sometimes I wear protection, sometimes I don’t do that/These girls aren’t quite yet old enough to have anything that bad”), and then finally remarks mockingly that “Compared to apes or other beasts this is just child’s play”. The band pound away again and the signature tune is a chilling organ set to twanging guitar, again a fittingly evil soundtrack .

The music on Don’t Wait To Hide… lulls you into a false sense of security while the lyrics make you squirm. Perhaps most disturbing of all is ‘For Laura Kingsman’ (I’m curious if he scoops the names from tabloid stories and changes them slightly?), recounting the story of a paedophile grooming a young girl for sex and running through all the “tricks” for justifying his behaviour (“Don’t say grooming, don’t say abuse/Don’t say she was coerced/I was the weak one and she the strong I don’t think I was even her first/Is sex so harmful, is it so wrong?/Yes, well you don’t understand”). It’s all delivered in the style of a folk ballad, the fiddle and acoustic guitar giving it fake respectability and an extra chill. Surely a song can’t harm anyone … can it?

The last two songs on the album are more straightforward. ‘Lonelyman’ is exactly what it says, the story of a down-and-out rotting away in a small backwater, but Mayne’s words are cleverly pointed again, describing the kind of social underbelly that produces this kind of behaviour (“I woke up with a cigarette burnt out in my mouth/that’s the feeling you get when your conscience headed south/I’m a lonely man/A bottle of bourbon in my mouth/blisters on my hand”). ‘Man’ presents some kind of epilogue for the album, trying to tie the loose ends together and bring closure on all this darkness (“Keep on pushing I feel so tired/1000 pictures to keep me occupied/Yes I’m punching keep it tight/I’ll never be satisfied.”). Steadier ground, but still unsettling.

So nobody said it would be easy (listening), did they? The mood on Don’t Wait To Be Hunted… is thick with paranoia. Things occasionally brighten up, but the nice musical interlude at the end of ‘Lonely Man’ is surely just a ploy, and saccharine ‘Sweet Boy’ is eerily like Mo Tucker and The Velvet Underground’s ‘I’m Sticking With You‘, always meant to sound like the victim’s song. Actually, Mayne’s storytelling reminds me of Lou Reed’s Edgar Allan Poe tales like ‘Sister Ray’ and ‘The Gift’ (sung ‘sweetly’ by John Cale) on the classic 1968 White Light/White Heat album. Those fearful about the human condition (and the recent events surrounding the Savile Enquiry certainly give us reason for pause) should probably avoid this. David Cronenberg’s Wife’s Don’t Wait To Be Hunted To Hide is as relentless as the title would suggest. There really is no rest for the wicked and nowhere left to hide, hear these songs and weep.