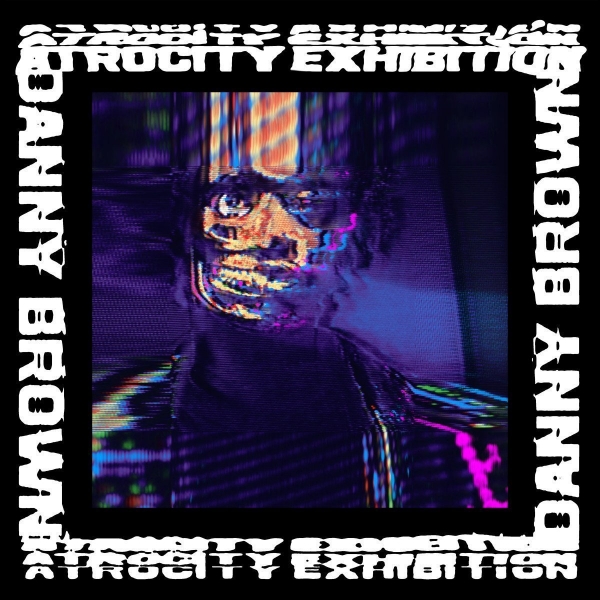 When you look at the rap landscape, there’s no-one quite like Danny Brown - past or present. Whether it’s his personality, his lyrics or even his success, Danny Brown is a true outlier and it continues to make him all the more interesting as he drops his fourth album, Atrocity Exhibition.

He’s a man that revels in contradiction; who defies all traditional hip-hop expectations. Hyper-active, yet somber. Drawing inspiration from Joy Division and Talking Heads as much as Raekwon. Most importantly, he wants to make albums that last, concerned that audiences nowadays simply want one-and-done party anthems. Unafraid to take time off to slow down, sit down and really focus (it has been three years since Old after all), creativity over ambition seems to be Brown’s motto.

On Atrocity Exhibition, it’s all about what fame has done to him and how he looks to tackle the future. With a title inspired by the opening track on Joy Division’s Closer, it’s apparent what route Brown is taking here. A song depicting Ian Curtis’ struggles with the audience’s perceptions of him (“For entertainment they see his body twist / Behind his eyes he says, “I still exist””), it’s a feeling that Brown seems to share.

As someone in the public eye, Atrocity Exhibition is his attempt to put forward that he can’t always be “on” as many might expect him to be, and that there is another side to what the public sees. On the hazy yet funky “Rolling Stone”, he broods “Feeling trapped, no looking back”, aware that now the audiences see him a certain way (similar to Curtis’ epileptic dancing on stage), that hyper-active Danny is what they’re paying to see.

“Tell Me What I Don’t Know”, meanwhile, sees Brown recalling the dangerous streets of Detroit and seeing poverty and addiction up close. Something of a takedown of other rappers who glorify their past as dealers, or even look up to it, he recalls looking up to the life himself before actually experiencing it first hand.

“Ain’t It Funny” explores the irony of how the past intersects with the present. In Brown’s case, this means the fact that he’s doing more drugs now he’s famous than he was when he was dealing them. And yet the reason is mostly the same: escape.

But it’s not all dark. Brown’s way with mixing the serious with the funny is still present and correct, each track full of his trademark fun wordplay. On the rapid fire “When It Rain”, he twists the idiom “when it rains, it pours” to refer to gunfire, while also rapping “Whole damn city probably got a couple warrants”.

The star cut here, though, is “Really Doe”, which sees Brown teaming up with the three of his contemporaries that he admired most and made him step up his game: Kendrick Lamar, Ab-Soul and Earl Sweatshirt. In true great posse cut style, each rapper gets the chance to show their worth; each a distinctly different style but together working like a charm.

For Atrocity Exhibition, Brown has once again teamed up with Paul White, which adds another layer to the tracks, constantly surprising and delighting. Richly textured, with a bonkers range of samples that apparently cost $70,000 to clear, it shows that Danny Brown really is unlike any rapper out there. Though he brags that he can rap over anything, working with White clearly brings out the best in him.

The  story of real-life Detroit on “Tell Me What I Don’t Know” is backed by a Carpenter-esque synth rhythm, while “Ain’t It Funny” is all manic horns that, at times, sound like a swarm of angry bees. The dark, silky beats of “From The Ground” suits Kelela’s snaking vocals perfectly and the hazy, discordant samples of “Downward Spiral” really capture an unusual trip.

On “Really Doe”, Kendrick brags “They say I got the city on fire” but, on Atrocity Exhibition, it’s Brown that does. Brown’s unwillingness to follow the status quo and to tread his own path has led him to create records that do have the potential to last and not fade away.

They’re “out there” enough to feel special, to feel exciting but not too alienating. You want to shove his records on any rap fan that’s never really given him the time of day. Atrocity Exhibition is no different. Rich, deep, full of wit, rapid fire lyrics and fantastically unusual production, it’s Danny Brown proving yet again that he is one of the most exciting rappers working right now.