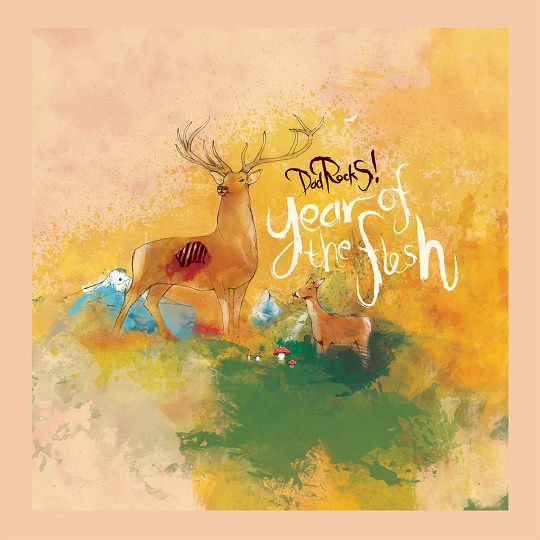 Timelessness. Probably one of the most desirable – and loftiest – goals any artist would have. Increasingly, the world’s tastes and tolerances become ever more fleeting and the question is, do you reach for timelessness despite the fact that what defines it is more transient with each passing day or do you plant your flag in the here and now, relishing whatever shelf life your art may be afforded?

Danish singer/songwriter Snaevar Njall Albertsson, who performs under the cringingly tongue-in-cheek nom de plume of Dad Rocks!, appears to try to have it both ways on his second long player, Year Of The Flesh.  Contrary to the stage name, Dad Rocks! trades in something altogether different from that clunky, plodding dinosaur of style.  Musically, Albertsson fixes his gaze skyward, augmenting his bouncy folk rock with epic baroque flourishes of swelling strings and horn sections.  It’s a dependable avenue to traverse as such grandeur has appealed to us for centuries.  There is a risk, however, that the constant reaching for the stars wears thin – and quickly – prompting a sense of arrogance.

Fortunately, Albertsson is too approachable to fall into this trap – Bono, he is not – and he has the good sense to keep tempos and dynamics fresh from song to song.  It’s difficult to quibble with Albertsson’s knack for melody and composition as each song is meticulously crafted, constructed from numerous and often flawlessly integrated parts.  Unlike U2 or Coldplay who threaten to bludgeon you with the sheer magnitude of their grandiosity, Albertsson opts to build intricate layers of detail as the framework for his epics.  Witness the creeping dissonance as “Daughter Track” closes out or the percussive stomps underlining the gravity of “Cyber Bullies”; his ability to unwittingly build his brassy fanfares into the Appalachian tinged “In The Seine” or how he layers multiple brass parts over “Body Mass Index”s climactic chorus.

For all the compositional success Albertsson finds on Year Of The Flesh, the album’s most interesting and tenuous aspect is the lyrical content and how he delivers it within his confines here.  Repeated mentions of hyper-current items such as “torrents” and “Soundclouds” along with such detailed descriptions of bullying, credit card debt, and computer data management jobs, Year Of The Flesh is undoubtedly a document of our present time.  Surely Albertsson intended the album as such, but one has to wonder how this will age even in a few years’ time.  More problematic than the threat of anachronism is his inability to match his musical heartstring tugs with his words and vocal delivery.

A line like “Cyber Bullies”, “being a kid in school is taking life chances/waving goodbye to the schoolyard’s needle nest/my palms start sweating as I hope for the best” should easily hit home given its relevance and explicitness, but Albertsson’s smooth yokel phrasing renders it emotionally detached.  Nearly every song is plagued by a similar aloofness, though due also in part to the insistence on third person narrative.  Only the closer “Body Mass Index”, a personal tale of one of Albertsson’s loved ones fight with anorexia, carries the emotional gravity it seems he desires for the album as a whole.

Year Of The Flesh is often beautiful and a sonic treat for the ears and, regardless of how time treats its lyrical theme, it is refreshing to partake in an album so unambiguous and directly relevant to the trappings of today’s digital age.  Ultimately, though, Year Of The Flesh’s tug of war between its noble but emotionally stunted lyrical content and its heart-rending musical accompaniments make it more an album to admire than to love.