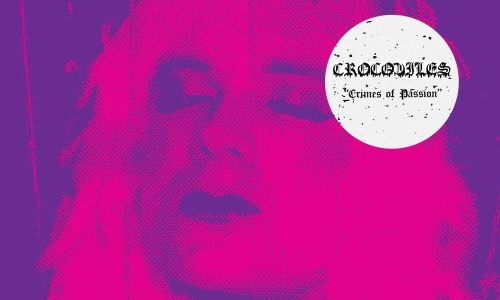 The fourth record for a band is a monument of sorts, a recognition that they’re committed to developing their sound as a unit, a testament of having survived countless tours, roadblocks and hang-ups on their way to creating their art form. Indeed some of the most recognizable bands in the world have given us their most memorable moments with their fourth release; immediately, Led Zeppelin, Queen, Radiohead and R.E.M come to mind while others like U2, Coldplay and Death Cab For Cutie defined their status with their fourth releases as if to send a message of maturity and longevity. Though perhaps not on the grandiose stage as the aforementioned acts, San Diego`s Crocodiles have put forth their best work with their fourth full length record, and in doing so have cemented themselves as one of the top noise rock bands in recent memory.

Crimes of Passion excels because it begins to distance itself from the fuzzed out shoe-gaze for which the Crocodiles are known for and this can only be taken as a sign of maturity. There is still plenty of distorted blurriness, but overall, it seems more passionate – and it may just be the album that switches the proverbial gaze from the floor to the meet the eyes of the band.

If you require immediate proof of the subtle but effective migration, the record opens with a blissfully rocked out piano riff and an accompanying tambourine on ‘I Like It In The Dark’, a song that explores the limits of human knowledge when it comes to the realms beyond our physical world. The track is littered with west-coast fuzz but a hint of gospel towards the end and some philosophical lyrics that proclaim “There is no shine in heaven / There are no fires in hell’ shows there’s much to discover below the surface. It is indicative of Crimes of Passion to deal with heavy subject matter in a fun, surf-fuzz meets noise-pop sort of way. Or, in the manner of ‘Cockroach’, there are some opportunities for air guitar with dirty, bluesy riffs complimenting Brandon Welchez’s prose making reference to an ex-lover as one of the lowliest of insects.

If there is one minor criticism of the record, it is that Crimes of Passion lacks a few more tracks like ‘Cockroach’ where abuse on the instruments is evident and encouraged. Still, the sugary sweet choruses of `She Splits Me Up` and `My Machine Gun` might be a little slower than what you might be used to from the group, and the subject matter remains steeped in a darkness shrouded by death and war, yet there is an irresistible urge to sing-a-long to most of the tracks on Crimes of Passion partly due to a feeling that the songs were conceived in the warm climate of their hometown and partly due to sticky lyrics that stay in your head – “me and my machine gun / We take no shit from anyone”. Crimes of Passion is a stellar fourth effort and may prove to be the defining record in what surely will be a long career ahead for the Crocodiles.