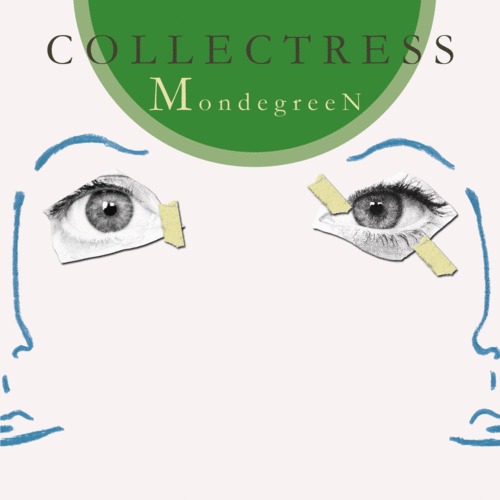 Lady Mondegreen is a mirage of British balladry, a high-born phantom winked into existence by a child’s chance mishearing (“They have slain the Earl o’ Moray / And layd him on the green”). When Sylvia Wright asserted a preference in print for her misinterpretation, a literary legacy was ensured; ‘mondegreen’ made the Oxford English Dictionary as the term for a misunderstood phrase, malapropisms of the ear.

Collectress embrace the notion that music and its meaning has much to do with environment, interpretation and improvisation. Though a paucity of lyrics limits the chance for any mondegreens here, it does not diminish the character in these often conversational vignettes, dense exchanges of patterns and moods that wrap and enrapture. The quartet’s music might be ushered from the ether – soothing or unsettling as the air demands – but it takes an organic form.

The opener-cum-overture “Whitechapel (Flint Wall)” swirls amid woodwind and gusting strings like late autumn leaf litter, while a sense of something stirring or budding builds slowly. This spills into “Spell”, which busies itself like wading birds, first shore-bound but then ascending in flight. Its underlying rhythm is as certain as the tides but the melodies spiral to the thermals, airborne and boundless, changing planes to manipulate mood. Unbound and unwound, the elevation is almost visual and tangible.

In swatches and swathes, Collectress play chamber music without constraint. Wordless fragments and narratives give Mondegreen a patchwork identity, windows and wormholes tessellating in a kaleidoscopic scape that fits the four-piece well. “Pumphouse” passes like a front, the foreboding echo of dull industrial thumping swallowed by swelling strings; pulleys and pinions that ratchet, tick and unravel while violins respire like a city sky.

There are freewheeling interludes, a cycling cello on “Movement” and the pedalled pump organ of “Rolling”, experimental excerpts that expire all too abruptly. The real puffs of colour come from the instrumental interplay, approaching Lau-like bursts of brilliance at its peaks. Elsewhere dusty fluttering and desolate discordance reach eerier areas – and with found sounds, fiddles and a harmonium, Collectress might be haunting Penguin Cafe.

Lyrics are barely missed before making their belated entry on the nautically-themed “Goodbye”, quoting a Katherine Mansfield line like a prophecy or prayer. Chanted calmly as piano laps and cello groans forebodingly, the song evokes an ominous transience, a lone gull crying, a girder creaking in string-stirred air. Time is a shifting, slippery concept here, and the source is aptly matched. Peace returns on final offering “Before and After”, woodland trilling a prelude to the constancy and calmness of a meandering summer morning.

If the album’s title implies that meaning is a matter for the listener’s ear, so these songs support and suggest an open array of emotional preconceptions and responses. Even so, the idiosyncratic Mondegreen is a very self-possessed first release. The free thinking with which Collectress write and improvise is informed by their own sensitive absorption of surroundings, making multifaceted but single-minded sounds. Toying and teasing with a pleasing flippancy at times, the natural and unnatural are almost intertwined enough to grant Lady Mondegreen her pulse, after all.