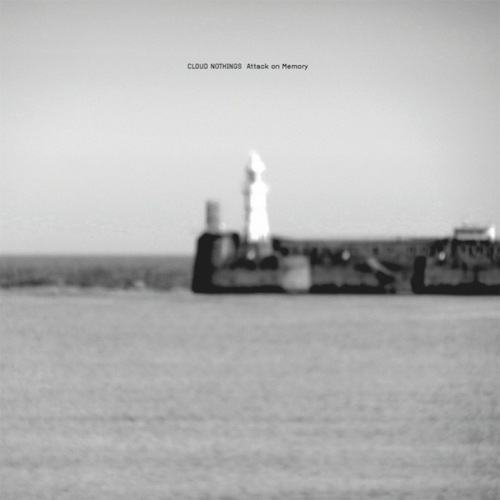 It was the lo-fi, scuzzy, drop-out sound that first endeared us to Cloud Nothings, and it’s that sound that they progress with on Attack on Memory. Opener ‘No Future/No Past’ suggests a darker, spikier mood, delving into the realms of Nirvana and ’90s grunge. It’s not a particularly arresting introduction to the album: if Cloud Nothings are already in this much pain this early on in the album, goodness knows how it’s going to end.

Luckily, things turn a corner and rise from the murky depths. ‘Wasted Days’ is a nine minute, riff-slinging, cymbal-toting anthem, from the vocals early on to the descent into full-on, QOTSA-esque rock out, and the repeated mantra “I thought!/I would!/Be more!/Than this!”.

It’s straight out of the plaid-clad, overcast sound of grunge, and into tight t-shirt sunnier days as the album progresses, with rolling drums, indie-pop guitar, and Dylan’s recognisable nasal drawl. ‘Separation’ is a upbeat, head-spinning guitar assault – thrashing chords, whirling riffs and an unrelening energy, and ‘Our Plans’ and ‘Cut You’ follow in a similar vein.

‘No Sentiment’ neatly summarises the theme of this album, and could’ve been the title track. Dylan emotes “No nostalgia/No sentiment”, and the album does indeed feel like it’s distancing itself from his previous work under the Cloud Nothings moniker, now a full-blown band rather than just Dylan and his bedroom. The glorious pairing with Steve Albini in the producer’s chair has no doubt helped shape Attack on Memory to be the album that it is – drawing out that deeper, rockier sound, a move away from their more pop-based earlier work.

Attack on Memory certainly has the air of authenticity when it comes to the era that its music predominantly alludes to. At its heaviest it’s At The Drive In, and its softest, Jimmy Eat World, albeit in their louder moments. This is guitar music from a time the term evoked gravitas, not a well-worn roll of the eyes.

Attack on Memory feels like a third album should – a progression, a move into new territory, and an expansion, literally filling the space that previous albums suggested. And all condensed into a no-frill thirty minutes. Gutsy, aggressive, and ultimately confident, if Dylan Baldi has come this far by the age of 20, then who knows what else is to come.

Listen to Attack on Memory