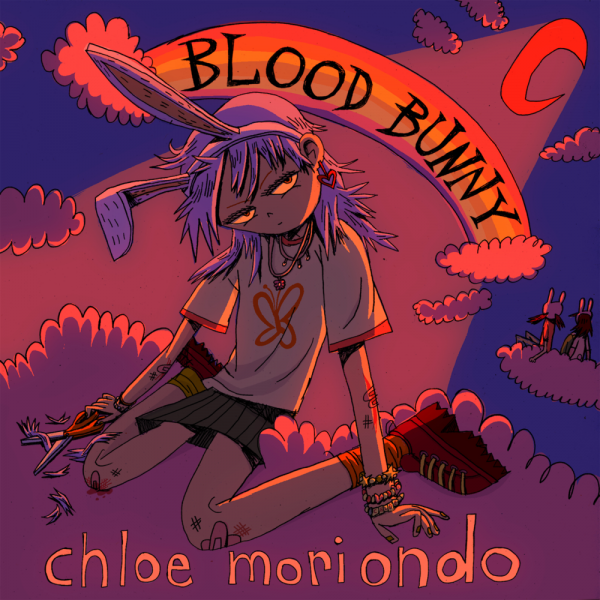 Coming three years after her debut album Rabbit Hearted - released when she was just 15 - follow up Blood Bunny is Chloe Moriondo going big. In continuing to branch out from the ukulele covers that gained her a fanbase on YouTube, Moriondo has created her boldest, brightest and most ambitious project to date.

Indebted to an array of genres, you'll find '00s acoustic-guitar driven pop, as well as pop-punk inspired moments – there's even a reference to Canadian staples Simple Plan in "Favourite Band". Moriondo's vocals deftly move between these styles, topping each sonic landscape with a cherry-sweet timbre, honest lyrics and an often nonchalant performance.

Although Moriondo sounds sure of herself on this record, there is an undercurrent of self-doubt. On opener "Rly Don't Care" she states that she isn't bothered if someone doesn't like her hair, clothes or piercings, because she's eighteen now. Three tracks later, "Girl on TV" explores the other side of the coin. The track's acoustic guitar motif and crisp drum loops give life to Moriondo's desire to be as happy as the girls on TV, despite being a "freak". This showcasing of the interplay of confidence and anxiety that burbles through early adulthood - it looks so easy breezy for everyone else, after all - is relatable and aspirational at the same time.

"What If It Doesn't End Well" is an end-of-album gem, playing with dynamics as Moriondo wonders if relationships are worth investing in when their inevitable ending is out of your control. Gently plodding over acoustic guitar, rising in urgency before crashing drums descend, culminating in a wailing that could have see Avril Lavigne herself joining in. Against its backdrop of anxieties and frustrations, Moriondo's decision to end the record on a song that faces the fear of losing those closest to her is intentional. Written as an attempt "to find some comfort" within this fear, the track is a neat culmination of Blood Bunny's themes whilst leaving the door wide open for whatever will come next.

Not only has the world has been able to see Moriondo's evolution from bedroom-pop up-and-comer to fully fledged musician, but also her journey as someone coming of age in the spotlight. This album is the crystallisation of that journey, one that's volatile and transient, important and worth condensing into music. Blood Bunny is reassuring, and as a body of work is an example not just of someone going through this same turbulence, but flourishing regardless.