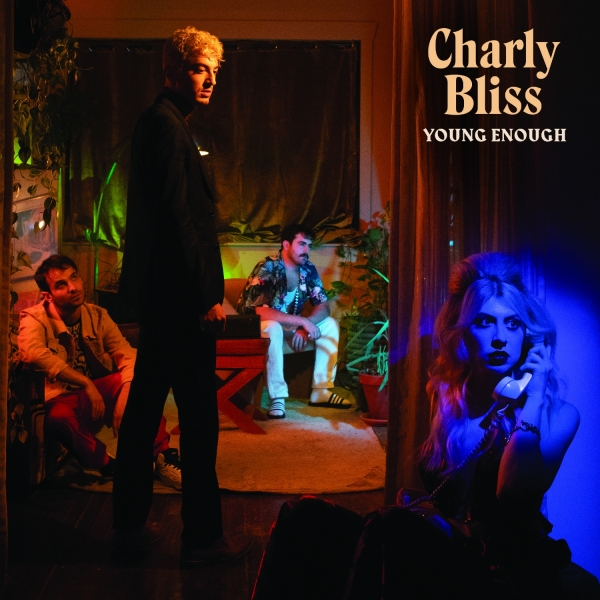 With Young Enough, Charly Bliss’ excellent and important second album, the band have decided to trust their audience.

The quartet—vocalist and guitarist Eva Hendricks, guitarist Spencer Fox, bassist Dan Shure, and drummer Sam Hendricks—have largely traded the ‘90s flannel bubble-grunge of their fun debut, 2017’s Guppy, for ‘80s pastel-covered new wave. In other words: Guppy was a rock album that happened to have sharp pop hooks; Young Enough is a pop album that just happens to rock.

And to be clear, the band still rocks out, as on “Blown To Bits,” the arena-ready opener, and “Under You,” the track closest to Guppy’s sound. But Young Enough is a pop album through and through, something that’s immediately obvious both from Joe Chiccarelli’s high gloss production, as well as the purposeful emphasis of bright and memorable melodies.

Part of this pivot is the heavy lyrical content of the record. Much of it finds Hendricks detailing and working through the thoughts and feelings of the sexual assault she suffered from her now ex-boyfriend. Pairing self-doubt (“I can feel my sanity dissolve”), self-blame (“I elected to drown in you”), and deeply uncomfortable descriptions (“Columns of confetti colors bleed / Kisses pressed into a scream”) with twinkling and bouncing songwriting might seem counterproductive on the surface. Yet her ability to make something catchy out of such pain acts as a something of balm and, more importantly, it’s a middle finger to the perpetrator.

Which brings us back to trusting the audience. The idea of turning such a dark experience into singalong material is a difficult balancing act, and one that requires placing faith in the listener’s attention. Certainly these songs are designed to be sung or screamed back to Hendricks when played live, and singing through the pain, and having it sung back to you by others who can possibly relate, might be the point. “I needed it to be a pop song,” Hendricks says of “Chatroom” (and, really, the album as a whole), “because pop music makes me feel strong. Pop music is a communal experience. It’s meant to be something you experience with other people, whether that is through dancing or screaming along with your friends.” Young Enough, then, is essential because it’s the latest reminder of the healing power of music.