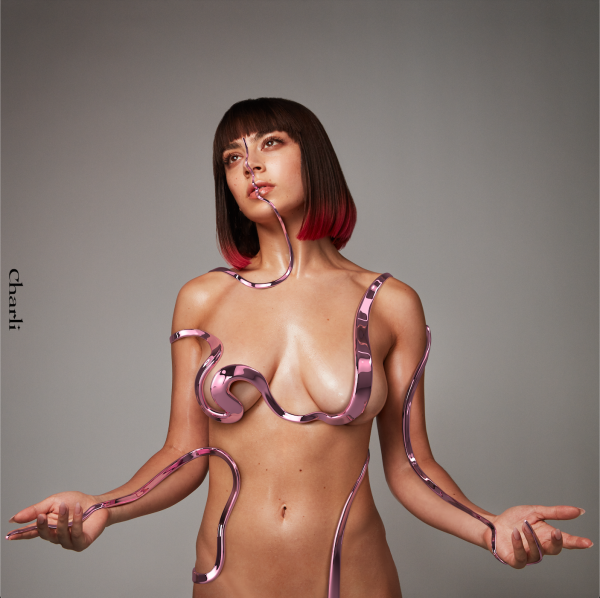 Charli XCX’s music is convincingly futuristic because it gives equal weight to technological sparkle and decay.

Her 2017 mixtapes Number 1 Angel and Pop 2 were world-building exercises for an imagined future where accelerated technology is a matter of fact; where time is flattened and all eras of pop (re)play out at once. Charli – her fourth album proper – is her first big statement from this established world.

Charli’s imagined future is convincing because it’s not acknowledged lyrically – pop concerns of romance, heartbreak and partying are eternal, and maybe even more essential as an emotional crutch as the apocalypse gets closer. Singles “Gone” and “Cross You Out” are both introspective and dramatic, set in distinctly metallic confines. “White Mercedes” and “Silver Cross” are hard-partying sadpop anthems, the former an unapologetic fuckgirl statement, the latter a heartbreak ballad. Both lean on the familiarity of ‘90s ballad structures and melody lines, embellished with decaying electronics.

Like Pop 2, Charli is busy with guest stars. Zeitgeisty pop superstars (Lizzo, Christine and the Queens) mix with cult figures (Cupcakke, Sky Ferreira) – even bounce pioneer Big Freedia makes an appearance. This is a tribute to Charli’s songwriting pull and popularity among fellow musicians, as well as her restless approach to making music. It’s tempting to see the tracklist as easily divisible between Charli’s two primary modes of polished pop singles and textural sonic experiments, but this isn’t always the case. The Lizzo-featuring “Blame It On Your Love” is a reworked version of Pop 2 standout “Track 10”, streamlining its haphazard original beauty. But “Click” – featuring Kim Petras and Tommy Cash – is one of the most abrasive tracks on the album, a clatter of harsh noise set against delicate undertones, enough to put the listener’s teeth on edge. The unpolished side of Charli’s practice also comes through in song titles which are suggestions rather than statements. The HAIM-featuring “Warm” has a cocoon-like atmosphere, and “February 2017” – featuring buzz artists Yaeji and Clairo – is hooked around a time-stamped voicenote.

When the Troye Sivan collaboration “1999” was released in late 2018, there were plenty of snide jokes about Charli and Troye still being at primary school in 1999, but this supposes that the song is being sung from our present moment. It’s much more interesting to imagine that Charli XCX is situated in a future where time is fluid and porous, where we can holiday in the imagined futures or nostalgic fantasies of any time period. Its twin track “2099” makes this explicit. The conceptual and sonic opposite of “1999”, it is strange and pitch-dark, a number one single for the end of a century that repositions experimental electronic music as pop. Charli and Troye’s voices are snarling, chanting fragmented flexes: “I pull up / pull up / future / future.”

Charli XCX has been positioned on the cusp of a Big Moment for longer than many pop figures, and certainly unfairly considering her considerable influence on the sonics and aesthetics of the 2010s. The mononymous title suggests the definitive statement that she’s been expected to make, and Charli is almost there. Ultimately she’s too gloriously messy and multitudinous to produce such a thing. Although she could often benefit from an editor, her process and vision doesn’t adhere to the music industry’s prioritisation of the album format – which feels right for an artist whose music could be read as an attempt to dissolve time itself.