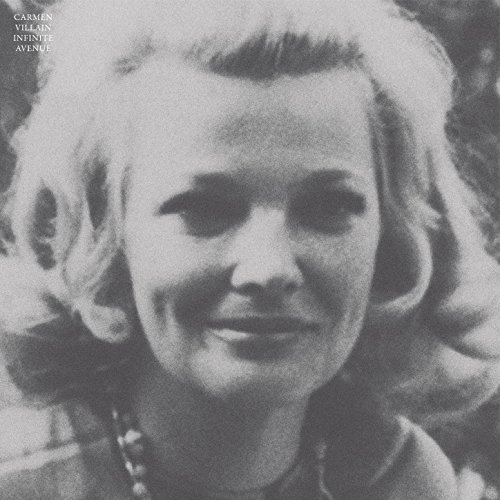 2016 did nothing to endorse the myth of humanity as a progressive enterprise, and any of us who thought 2017 couldn’t get any worse have been treated to more of the same, with added genocidal posturing.

Shouldn’t the passing of the years accumulate with it some kind of solemn wisdom? What happens when we stop patting ourselves on the back for a present that left so many in the past? What do we do when the future is privatised, atomised, and only available on subscription? How do we make sense of the impasse? Enter Carmen Villain.

The shoegazey alt-rock of the Mexican-Norwegian artist’s 2013 debut Sleeper has been a casualty of the intervening four years, but the folky, experimental electro-pop sound has survived on a record the production values of which are notably plusher, the textures more tactile. Infinite Avenue, recorded and produced in Oslo-based Villain’s own studio and again released on Smalltown Supersound, is like the incarnation a medieval map with deserts, oceans, urban wastelands and mountains all improbably and confidently arranged within the same circle.

Infinite Avenue problematises direction and progression: it’s a multipolar mass percolating imprecisely, indolently, ambivalently around resolution. It wanders through scenic segues by foregrounding different components, from the purpling hazy guitars of the opening tracks to the nocturnal percussive phrase and piano-led lament of the album’s core, and the synths and weighty bass drones that buttress Villain’s voice in the latter stages. They could be uneasy pivots but are treated here like deft gradations of the same palette.

The titular album opener is a soft guitar ballad that gets swept off course on lofty squalls, with Villain adrift and nagged by doubt: “Oh, I am found / Blue oceans roll away for miles / Oh, for a while / Desire, will you bring me back? / Strike my heart, feel my body too / Hoping that I can be enough for you”. She weaves a silken guitar through lead single "Red Desert", titled after the 1964 Michelangelo Antonioni film and whispering through the fog cloaking its industrial husk. She longs for the respite of intimacy and human contact but is again uncertain (“We picture all this love and time for breathing / I’ve got potential but there’s demons in me”) and is given scant reassurance by the song’s alienated refrain of “It all means nothing”. The final verse offers a beguiling invitation: “Will you change your mind? / Will you change? / You will change your mind / You will change”. By penultimate cut "Water", the promise is denied: Villain is spirited away on a glacial updraft of "Nothing will change".

Compatriot and avant garde maestra Jenny Hval lends a heart-rending vocal to "Borders", the first of two tragic acts borne out at the midpoint of the record. The single, stalking moonlit pathways to a passive, determined drumbeat, is a timely denunciation of racialised geographies and the outwardly-encroaching security state: over gasping pipes, Hval delivers the indictment: “And I was so afraid / I felt that I had died / That night on the border two weeks ago / Where they put a border control / And you only go through if you’re white / Like a starry sky only seen if you’re white”.

It’s followed up by "She’s Gone To California", which at times is just a little too claustrophobic, a little too urgent, a little too accurate in its teasing of the anxieties that nag at our pleasures and our dreams: “She could stand and see the water flowing / By the waves sunbathe in silver glow”, sings Villain. Look closer and the sea is boiling, the sand molten, the moon crimson, the echoes of her voice aligning with dreadful clarity. In the chill shadow of closer "Planetarium's" sub-bass the translucent shards of her vocal, tailed by a ponderous piano, are abruptly snatched away by static, and the record comes to an inconclusive ending. There is no salvation, no destruction; only the promise of existence, nomadic and precarious.

On Infinite Avenue, Villain has taken accurately the pulse of a world where human development has at best an ambivalent association with humanitarian progress, and where our relationship to the spaces we inhabit is increasingly commodified or criminalised, often based on the colour of your skin and the value of your assets. It's an expressive and elusive record that doesn't give itself up easily and doesn't promise any solutions to the problems it poses It's an unsettling and irresistible road to nowhere, and Villain is the perfect guide.