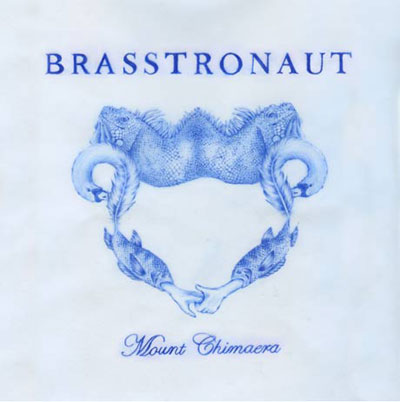 Pun-named Vancouverites Brasstronaut have been around since 2007, but this year has seen the release of Mount Chimaera, their debut LP. Already having made waves in Canada – it was longlisted for that nation’s prestigious Polaris Prize, which was ultimately awarded to Montreal band Karkwa – the record has recently been released in Europe also. Brasstronaut’s name may be a joke of sorts but Mount Chimaera is quite a serious, mature record which sounds like a labour of love and which does nothing to damage Canada’s reputation for producing interesting and ambitious indie rock.

As that name implies, there’s some brass involved. Indeed, diverse instrumentation is one of Brasstronaut’s strong suits, and one of the things which most helps them to stand out from their peers. Bryan Davies’ trumpet is particularly important to the sound (and is mentioned in one of the songs, in fact). That sound is one of patient, deliberate power – grandeur is not an unreasonable word to hint at the emotional highs and lows Brasstronaut can conjure with their carefully constructed combination of a typical rock setup with brass instruments.

Like the album itself, opener ‘Slow Knots’ takes quite a few listens to really unfurl its substantial powers but quickly reveals itself as a masterclass in the slow build, climaxing in a long instrumental section where not only the brass but also elegantly dancing piano are used to demonstrate Brasstronaut’s stately prowess. Across all of these eight songs – which play out during a considered 40 minutes – Brasstronaut display a willingness to search hard for a reliable groove and then to stick to it, relying on their smooth vocals and stirring playing to carry them home. Although it does take a little living with before the true effect of this strategy becomes apparent, ultimately Brasstronaut’s labours have paid off, leaving us with a restrained and subtle but still powerful album which packs a punch.