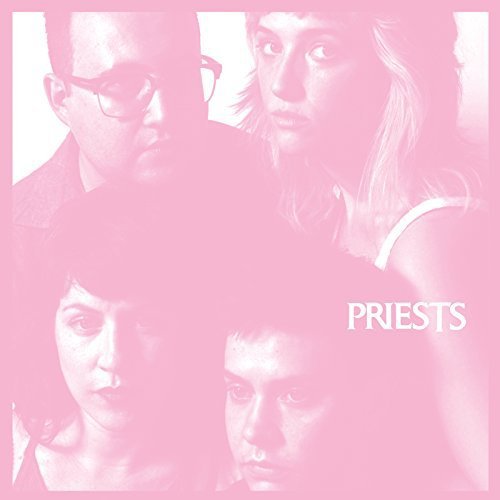 Revelling in the grotesque and riling against traditional binaries, Katie Alice Greer’s attacks and vocal performance make Nothing Feels Natural one of the records of the year.

Whether it be standing fast against a souring relationship, traditional societal trends or even the double entendre from the title itself (are Greer and co. lamenting the absence of normality or surmising the normal-ness of feeling nothing?), the overriding impression that one gets from the Washington punk band’s third record is that they belong on the outside. Throughout Nothing Feels Natural the band develop an acute sense of rejection and suspicion of absolutely everything, finding solace in their spot just on the outskirts of tradition and gazing in with a serious of piercing and evocative observations.

Far from unique to punk, the themes were already laid bare in the band’s previous two records, 2013’s Tape Two and 2014’s Bodies and Control and Money and Power. Despite Nothing Feels Natural being a lot cleaner than the former and more nuanced than the latter, by the end of 2014 Priests had presented their intentions clearly, from Tape Two’s opener ‘’Leave Me Alone’’ to the excellent ‘’New’’ and ‘’And Breeding’’ from Bodies… They were angry and pissed off, their concerns given voice by Greer’s powerful vocals and damning lyrics and backed by the equally jarring musicianship on show. Finding a space sonically between the cryptic broodings of Protomartyr and the more expressive punk of Sheer Mag, and most commonly compared to Savages, Priests’ appeal lay in their ability to both shock and enthral their audience via their directness and hostility.

On Nothing Feels Natural, Greer is at her most volatile, delving into a more grotesque presentation of her subjects than seen previously. Interestingly, this is accompanied by a more prevalent surf-rock influence musically, something Priests haven’t previously explored to any great degree. The eponymous track in particular sits atop a beautifully groggy series of guitar chords and riffs, an aesthetic alike Title Fight on their Hyperview record. ‘’JJ’’ is driven by a more Drums-esque approach musically, resulting in an almost comical impression underlying a tale about a disappointing ex. Although rarely truly comical, the softened abrasion of their sound compared to their earlier records does further exaggerate the sense of separation and dichotomy so central to Priests’ music.

From the reference to eating maggots on ‘’Appropriate’’ to describing herself as ‘’a wet dream soft and mean’’ on ‘’Pink White House,’’ Greer’s choice of imagery and delivery is always intended as a means of creating the boundaries she sees between herself and the norms of society. Positioning herself as a slightly disgusting outsider, vocalised almost to the word again on ‘’JJ,’’ Greer fulfils her role as a damning critique in an exhilarating fashion. On ‘’Nikki’’ she admits ‘’It's going to take a lot for me to want to leave my mental city,’’ whereas again on ‘’Pink White House’’, perhaps the most fervent track on the record, her mocking of the ‘’wing nuts’’ lies in their willingness to live their lives adhering to tradition. Sparing of no-one, Greer is a foe you’d be best advised to avoid, and constantly be looking over your shoulder to check where she might target you next.

This role of Greer’s however is undoubtedly one she relishes. Time and again she reinforces the importance of challenging normality, whether through her vivid visionary language or finding ways in seemingly normal situations to conjure another side. The very first line she delivers on the album is ‘’You want some new brutalism?’’, enforcing her duty as a returning figure to offer an alternative to the norm. The terrifying ‘’No Big Bang’’ offers the most evident view of the two sides, as she relays her own paranoid perspective on a topic she opens with another person’s more optimistic viewpoint. Given her favour of the grotesque, her most telling rally, again on ‘’Pink White House,’’ is when she spits at her targets, ‘’You’re too pitiful to be obscene, too cowardly to be embarrassing.’’ Being unable to adopt the alternate is to give in and be spoon fed, and for Greer, that in itself is totally inexcusable.

At no point does it appear like Greer is rallying for the sake of rallying. She has an agenda, a series of problems in society she wants to shed light on, and she is willing to delve into the darkness to attempt to do so. Tracks such as ‘’Leila 20’’ in particular provide an insightful and measured, if at times rather intense, telling of various wrongs in the world, in this case domestic violence. To shoehorn Priests into the position of angry for the sake of angry is to do them a severe injustice. Instead they have produced a record packed with searing commentaries and vivid imagery, confirming their status as a band you’d be a fool not to heed.