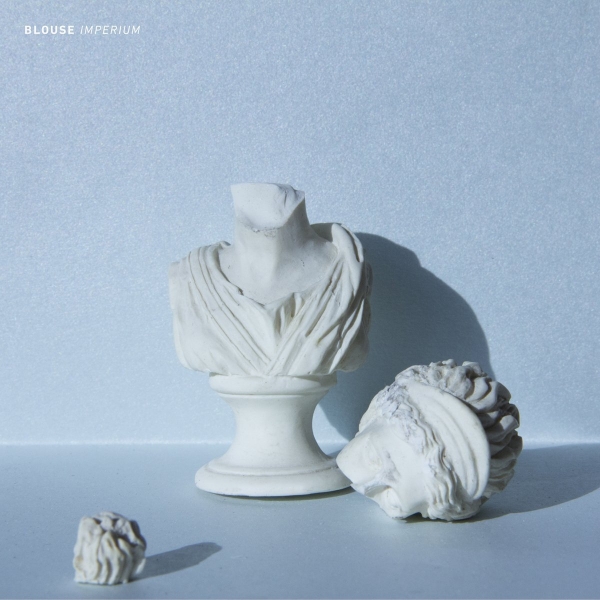 The three-pronged Portland assault of BLOUSE has changed. Where blossoming wooze-flavoured synths, a hazy melange of pads and all manner of dreampop staples once reigned supreme, on Imperium there’s now a resurrection of late ’80s/early ’90s indie and padded-shoulder new wave. The sonic bracken and thickets of noise are organic, dishevelled and the kind of raw you get when your elbow meets asphalt. It’s still entrancing, and they continue to wield a captivating timbre, but textures are more brittle and the electronic lean has dissolved, paving the way for instruments that “don’t plug into a wall.” You can hear broken rock and grunge and The Breeders-esque dilapidation in their veiled tones; there remains a mystical aura, but the end result is achieved via different means.

There’s a splash of Nirvana drear on the title track – there’s a resemblance to ‘Lithium’ – though it’s a bit fuller and a less ragged. Bass guitar plods with lolloping menace, the alkaline jangle of swooshing axes is swallowed by four-to-the-floor percussion and singer Charlie Hilton’s fizzing slur. ‘Eyesite’ isn’t too far removed – it’s helmed by rock instrumentation, but their mining a vein of underwater squelches and the aquatic warble of someone singing into an electric fan. ‘Happy Days’ utilises the guitars more, creating a myriad of sublime, wobbly effects with shoegaze tools. It’s lighter and features a daydreaming-a-meadow atmosphere, but ultimately, the result is akin to the rest of the record: hypnosis by way of rock.

There are fragments that detract from the fresh formula. ‘No Shelter’ with acoustic strumming and lost-at-sea vox showcases a welcome change in timbre. It feels intimate and introspective, although Hilton’s words are devoured by a swooning abyss, and there’s a larger ’90s college rock feel than a dreampop one. ‘A Feeling Like This’ chugs with C86 static. Also, if there was ever a bigger trickster in music, they’ve yet to show their head: Blouse inject a blip that seems identical to the Facebook messenger sound. It’s enough to turn an Internet-savvy generation paranoid searching for the mysterious vanishing notification.

One of the strongest defections from their calling-card timbre is ‘Capote’. Riddled with acoustic Mexicana chords and electric guitar slides, things notably change up a gear with the inclusion of live cellos; rarely a feature in pop/rock anyway, the portly, haunting baritone strings stick out. It transforms the cut into a dark, brooding ’70s folk cut.

Blouse transpose themselves into a new genre, but end up delivering a similar result. It all sounds markedly different, but the tones and feelings and soundscapes summoned feel familiar. It’s a nice take on their style, and one that’ll go down a storm with fans, but whether it has lasting power after the initial “Wow, this is new!” is yet to be seen. It’s worth a spin for sure, and there’s some spangly gems on offer, but if you were looking for a reinvention of the wheel, Blouse are going to make you wait a bit longer.