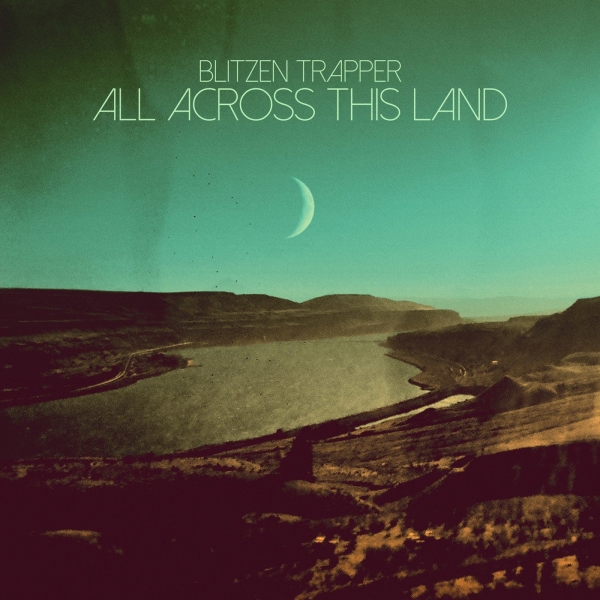 Charting the progress of Portland, Oregon quintet Blitzen Trapper since their first breakthrough eight or so years ago has been somewhat similar to tracing Modest Mouse’s lonesome crowded route from prodigious indie beginnings in the ‘90s to being the well-oiled touring machine they are today, putting out increasingly polished releases.

Now on their eighth full length, their songs still have sturdy bones, and lead singer/songwriter Eric Earley and Co. are playing together tighter than ever, but an increase in professionalism rarely nurtures the element of surprise.

For a while, that element of surprise was the ace up their sleeve. Though the players are the same, the five guys behind All Across This Land don’t sound like the mad professors that conjured Wild Mountain Nation, Blitzen Trapper’s charmed third album, and the first to reel in rave reviews for the band. That record remains a quirky revelation, as it joyously careens from ramshackle Southern funk to noise folk and countrified Black Sabbath jams. Things have clearly changed since then, including the twang in Earley’s vocals, which wasn’t really noticeable before, but is unmistakable from the first lines of the new album’s title track.

Some moments on All Across This Land harken back to their past. “Mystery and Wonder” is something of a distant cousin of their first sort-of hit, “Furr”. That one began with the memorable line “Yeah, when I was only seventeen/I could hear the angels whispering”, and right away “Mystery and Wonder” hits at both a specific childhood age (“I wrote this song/When I turned fifteen/You were the only girl/I had ever seen”) and talks about having magic powers as a child (“Well I dreamed a lot/When I was just a kid/I could see through walls/That’s just the way that I did”).

Following that, “Love Grow Cold” builds up a lovely atmosphere that is flawlessly executed, like prime 1980s U2 doing a low-key country ballad, but the central lyric, “Honey don’t you let your love grow cold”, lands a bit soft. The country clichés come on even stronger in “Lonesome Angel”: “My lonesome angel/Rolling down the highway at night/Lonesome angel/You got what it takes to make things right/Oh my soul”. “Nights Were Made” is a straight up down-home celebration of being raised on rock ‘n’ roll and simple times in way that make the part of Oregon that isn't Portland sound like the storied Heartland of a vintage John Cougar Mellencamp hit.

It’s not that these kinds of images haven’t come up in Blitzen Trapper’s songs before, it’s that perhaps they weren’t conveyed so conventionally before. It’s hard to fault the group for taking the path of wider appeal to capitalize on a profile hard-earned from nearly a decade and a half of making music together. They’ve been moving steadily in this direction since their first taste of real commercial support with Furr, and All Across This Land is in many ways another confident step forward.

“A cold wind blows down a long dirt road” on “Cadillac Road”, and it seems like the band that crafted thorny ornate folk-pop gems like “Futures & Folly” is nearly invisible in the rearview mirror. The arrangements and execution have finely coalesced, but the anything-goes spirit that sparked Blitzen Trapper’s late ‘00s renaissance seems to have moved on. The wild mountain nation has been tamed.