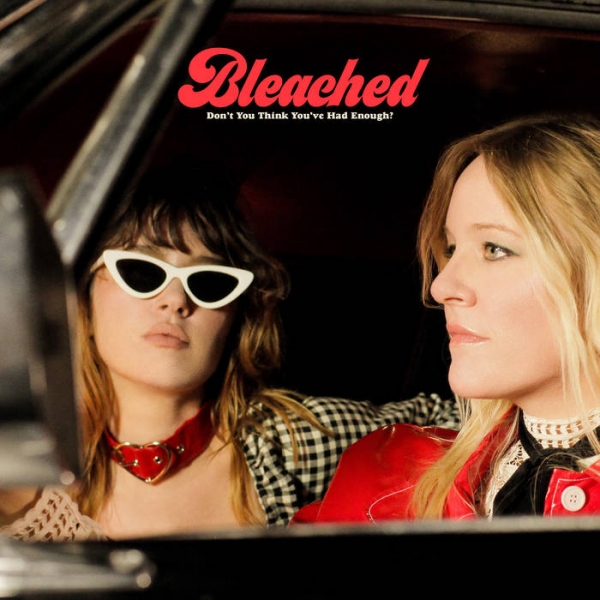 Maybe you see it the first time you wake to find sunlight creeping through your blinds, or the gap in your curtains.

Maybe you taste it in the sickly tang of strawberry syrup on a soft ice-cream. Maybe you smell in the acrid smoke of a barbeque, or freshly mown grass. However you first experience summer in 2019, you’ll damn sure hear in Don’t You Think You’ve Had Enough?, the new album from Jessie and Jennifer Clavin – aka Bleached.

Opener “Heartbeat Away” has that summer night, bonfire party vibe we all crave sewn into its ragged, retro power-pop riffs and shuffling drums. They have the incredibe ability to evoke Black Sabbath, Buzzcocks and the beach in the space of a few seconds. “Hard to Kill” (did someone order a BANGER?) is a Blondie-esque neon disco number with rolling bass and shimmering guitars. The chorus is the greatest homage to the slick city grooves of the '70s imaginable, and the verses are even better. It’s carefree but tight as fuck, it’s vibrant and joyous and essential. Endless replay Beckons...

“Daydream” teases an emotional ballad, before it becomes a buzzing slice of alt-rock straight from the 4AD playbook. “I Get What I Need” switches the vibe up again, borrowing the swinging bassline from “The Lovecats” and taking it into slinkier territory. “Somebody Dial 911” borrows some more from The Cure. It captures Robert Smith’s melancholic pop tendencies – specifically his mid-period, magisterial era. Think “Just Like Heaven”, “A Letter to Elise” and “High” and you’re there.

The next two cuts offer yet more diversity: “Kiss You Goodbye” is vivid, gleaming New Wave pop and “Rebound City” takes us back to their boisterous power pop roots – think Cheap Trick and choppy, buzzy riffs. One of the criticisms you could level at the Bleached of old is that they seemed to be firmly entrenched in the sounds and vibes they found easiest, but here we have an unbroken string of tunes where not a single one is similar to the one that came before it.

“Valley to LA” borrows some of the melody from R.E.M.’s “Man on the Moon” and roughs it up, and cooks it into a potent slice of power pop. “Real Life”, which follows, is probably the only dud on the album, buried as it is in the no-hoper slot at Track 10. “Shitty Ballet” closes the album, and it’s a Pixies-esque acoustic-led alt-rocker – it even blows up Frank Black style at the end.

A near-perfect pop record, a near perfect summer record and a near-perfect selection box of the most beautifully curated genre-blends. Genuinely, this album has a sound design so rich and varied you’d think Britt Daniel or Beck had something to do with it. This is state-of-the-art pop music with an irresistible sense of rough and tough feminine glamour. Do not miss out.