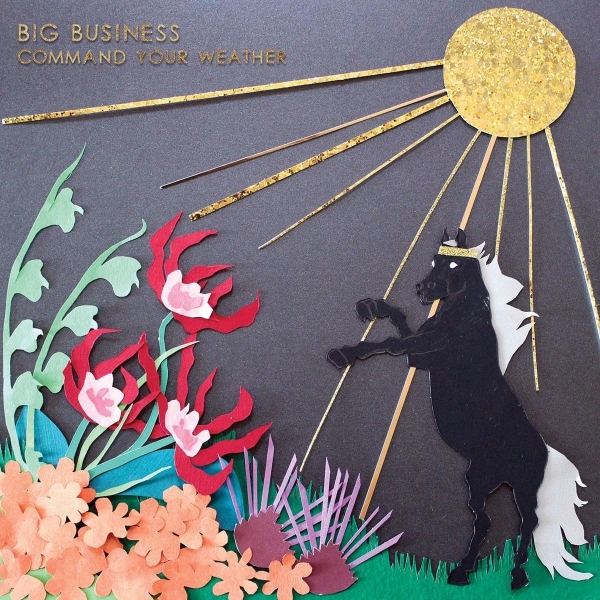 Big Business – AKA Jarred Warren and Coady Willis – have spent more than a decade carving out (or hacking wildly at) a niche in the alt-metal scene, from touring with Tool to making up the numbers in The Melvins back in 2006. Following 2014’s acclaimed but commercially overlooked Battlefields Forever comes an album that refines the band’s ribald rock into an obelisk of muscular sound and fury.

Command Your Weather is a world where metal is metal and intelligible vocals are to the music what armbands are to a dip in the Styx. A title so evocative of diluvial rains slashing the deck calls to mind Mastodon’s seminal Leviathan among others, but the comparison – relevant more so here than on previous outings – doesn’t quite hold water. It has the sense and scope of a concept album but dispenses with the po-faced prog intricacies in favour of lo-fi droning and stampeding drums, and if that’s why you’re here then pull up an oar; you won’t be disappointed.

From the chimes pealing in the fog on "Last Legs" to the cyclonic grungy riffs and convulsing keyboard flourish of "Father’s Day", Command Your Weather runs like cold and calculated clockwork. Fathoms beneath the chugging and the crashing is a record precisely measured and with a keen ear for dense arrangements and almost algorithmic reproduction. This, coupled with Warren and Willis' part-macabre, part-irreverent songwriting, makes for a record that is as technically impressive as it is disquieting. "Send Help", washing a magnetic sonar over its opening bars, takes a page out of the operatic songbook of Roger Waters for its harmonious catechisms: “How can I build it all? / Use your hands / And your will/ What if I feel afraid? / Stay calm, and be still / And if it falls apart? / Well that’s love / Some things can only get better”.

The grinding, growling, determinedly sinister "Popular Demand" is a standout cut, cresting waves of bellicose bass drums. It’s one of two seven-minute mini-epics on the album, the other being the closer "Horses" which reprises the tolling bells of "Last Legs" and is what the masked parishioners will play when they gather in the graveyard to burn pyres and plot your demise. “Bring those horses in tonight / They’ll surely suffer” sings Warren, though whether as a warning or with demonic hunger it’s hard to say. Command Your Weather showcases an even bigger Big Business than we’ve heard before, on unsettlingly imperious form. It's an M. Night Shyamalan movie where the spooky villagers are all high tech automatons; it’s an uncanny ghost train where the grotesque waxworks are petrified flesh and blood. It’s sludge but impeccably clean; and it’s all frighteningly good.