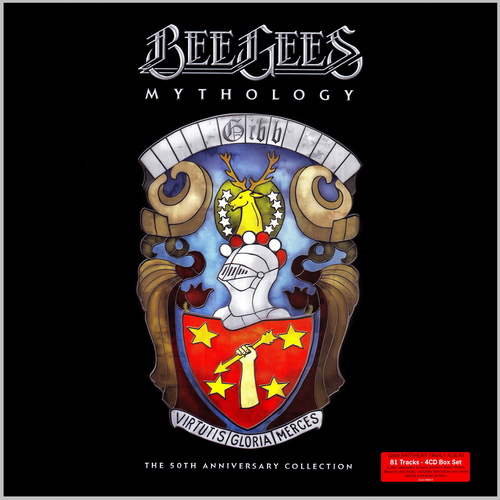 The Bee Gees’ Mythology compilation is aptly named; with the passing of the third Brother Gibb – Robin, who died this year – we see a third brother mythologised by the deeply-impassioned body of work he left behind for us all to enjoy.

The Mythology box set was originally released in 2010, more than seven years after the death of Maurice Gibb. Each of the discs in the 4-disc set were (and still are) devoted to a brother apiece, Barry and Robin’s discs containing their personal favorites, while the selections for Maurice’s and Andy‘s discs made by Maurice’s widow and and Andy’s daughter (Andy having died back in 1988). This collection, then, is really the ultimate memorial service. And no doubt it’ll be reissued once more when founding member Barry joins his brothers in that giant discotheque in the sky.

The box set, for those unwilling to go back and sort through the depths of the Gibb brothers’ collective legacy, which goes back 50+ years, is essentially a living will; songs hand-picked by the brothers (and their surviving family members) themselves, it is the quintessential dictation of what they wanted to leave behind for the world, how much of their great wealth we should get to inherit.

That said, we don’t get anything more than has already been made available to us – which includes the handful of previously unreleased tracks which appeared on the original 2010 release of the box set. But that’s not really the point, which is separate to the music featured, which has remained constant even while the essential Bee Gees sound has not: swinging from Beatles-esque pop balladry, to white guy R’n’B, to the shamelessly-glorious disco that they are most heavily associated with. As loud as the era was (and setting to one side its various merits), the Bee Gees will always be thought of in terms of a platform shoes, leisure suit, and gold medallion-clad John Travolta circa 1977 – even though the Bee Gees accomplished much before and since the release of Saturday Night Fever.

Anyone with a respect for the history of popular music will recognise the importance of these brothers, and will listen to each and every one of the 80 tracks included in the box set. Upon doing so, it may come as a surprise that most of the songs are not disco (in fact, only about ten of them are). Yes, ‘Staying Alive’, ‘Night Fever’ and ‘More than a Woman’ are present and correct, and Andy’s disc is particularly disco-heavy (the contents of which are all written by at least one Bee Gee, showing how even a solo Gibb is still really a Bee Gee), but the rest is just plain good songwriting – rich in embellishment, harmony, heart and soul. Just listen to songs like ‘I Started a Joke’, laden with string arrangements, acoustic guitar, Robin’s voice shaking with vulnerability and vibrato. Or the young Bee Gees’ hit ‘Spicks and Specks’, which is driven by piano, horns, and an utter lack of falsetto. It might come as a surprise to some that the Bee Gees can be enjoyed even when the tempo is no more than mid-. Mythology serves as a reminder of that fact.

In that way the box set is more emblematic than anything. Perhaps the tracks have been slightly remastered for digital, although that was possibly done where the songs were first transferred to CD. Otherwise, its appeal probably lies in the same things that make any such box sets special to fans: the artwork, packaging, self-contained nature, and the collectability that says to the diehard: “You need to own this”.

But true Bee Gees fans clearly would surely have snatched this up two years ago. So, it would appear that this re-release means more to the releaser than to the recipients, which is to say: Barry Gibb himself. Three Gees gone, and what is the fourth up to? Founding member Barry – the extra falsetto-y one – is now embarking on a world tour (starting with Australia, where the Bee Gees first started making music) with which this re-release coincides. Cynicism aside, it is perfectly valid for a musician – especially one as well-travelled as Barry Gibb, now 66 – to honour his family crest by going out and doing what he and the other Brothers Gibb did best. And it’s good to see that, even as no new music is forthcoming and their last studio album was in 2001, the band’s music is “staying alive” along with its last surviving member.