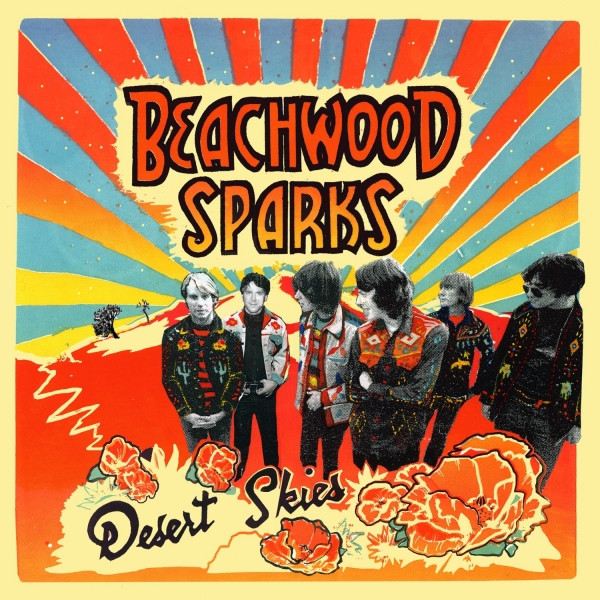 This belated release of some of the first Beachwood Sparks recordings, from the time when the band was a six-piece, offers an intriguing and instructive comparison with the later more consciously-fashioned Laurel Canyonesque material.

While never raw, Desert Skies is certainly less reverential than later albums, and if occasionally one senses that some ideas could have been developed more ambitiously (for example in “Make It Together”, two versions of which appear here), there is an undoubted freshness and an uncontrived optimism that pervades the whole work. Tracks like “Time”, in both versions here, have a youthful drive, with echoes of Neil Young’s ferocious “Like A Hurricane” guitar sound. And it’s when the band is so exhilaratingly unbuttoned, as in “Watery Moonlight”, when fearless embrace of Nuggets-style lo-fi pounding combines with a burst of indie energy, that Desert Skies works at its best. Here there is a drive that combines sweet harmonies and a Farfisa sound to compel attention throughout.

For sure, it’s not hard to see much of this album as an artful collage of references and, occasionally, it sounds on the brink of Austin Powers-like parody, but then songs such as “This Is What It Feels Like” change direction and cut loose to splendid effect. Certain tropes from many sources and many eras will only work when, as here, there are intelligently re-thought and given a new signature. The shift in pace at key points in “Sweet Julie Ann” is well timed yet somehow never negates a sense of spontaneity. Our first experience of “Desert Skies” was on the band’s debut album. Versions two and three appear now, with commendable variety in harmonising and rhythmic force that convey the original band’s arresting vigour at such an early stage.

The album is so much more than a set of rough drafts of more considered compositions. These 1998 offerings succeed in their own right; so much so that this reviewer wonders wistfully about the subsequent road not taken in the twenty-first century. Perhaps this is unfair, given the quality (of a very different type) of albums such as 2012’s The Tarnished Gold. Yet the unaffected, if admittedly now and then a little gauche, Desert Skies is well worth considering as a high point of Beachwood Sparks’ recording history.