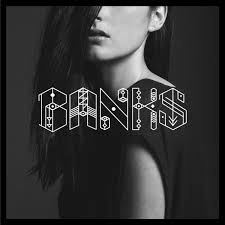 Sultry. Sultry, sultry, sultry, sultry, sultry. That’s not just a way to pad out the word count of this review, it’s also the word that’s been most used to describe the music of Los Angeles singer Banks since she appeared on the scene with the, ahem, sultry ‘Before I Ever Met You’ single back at the beginning of the year.

With a voice that begins somewhere deep in the heart and gets more seductive and husky as it rises through her body, Banks was immediately on to a winner. That late-night R&B jam was followed by ‘Fall Over’, introducing us to her reedier tones and served further notice of her taste in impeccable beats and synth notes. Just when we thought we had Banks pegged as a confident and sexy seductress, she dropped the fragile and stately, Totally Enormous Extinct Dinosaurs-produced ‘Warm Water’, all skeletal beats and more of a plea compared to the powerful figure she appeared to be in her earlier tracks. We’ve been waiting for more music since then to see what role Banks adopts next, and here she is with the stunning, enveloping and enticing London EP.

The SOHN-produced opener ‘Waiting Game’ is Banks’ best moment yet: sampled breathy choir and subtle piano gives her a base to let those husky vocals take over: “I’ve been thinking it over / the way you make me feel all sexy but it’s causin’ me shame / I wanna lean on your shoulder / I wish I was in love but I don’t wanna cause any pain…and if I’m feeling like I’m evil we got nothing to gain.” Then the beats drop in, all Gothic R&B and a near-companion to Justin Timberlake’s ‘Cry Me a River’ in tone if not quite subject matter. Banks sings of detachment and loneliness in the most alluring way, yet again showing the more fragile side of her nature. The sparking-with-electricity ‘This Is What It Feels Like’ is made more intense through the skills of Jamie Woon and Lil Silva at the mixing desk, but it’s still Banks who is the centre of attention: the vague “it” matters not as we’re left in no doubt that we’re feeling it through the emotional delivery of the track. It’s heart-stoppingly good stuff, and utterly compelling and beguiling.

In a world where R&B is in danger of being subjected to acts like The Weeknd, complete with Abel Tesfaye’s empty-headed lascivious posturing, it’s a relief that Banks has got bags more emotion and class – and the balance of having such a welcoming voice against the blown-out and icy musical set-pieces – and that’s evidenced by the closing two numbers here, ‘Bedroom Wall’ and ‘Change’. The former sees TEED back on board with some elegant beats to match Banks’ perfect delivery of some pleading lyrics, while the latter is the brightest and most uplifting moment, transforming the singer from sorrowful noir to a near-triumphant 21st century chanteuse.

This is a near-faultless EP, and one that’s so incredibly moreish; I’ve played ‘Waiting Game’ more than any other song I can remember this year in the space of a couple of days, and you get the feeling that there’s still much more to come from Banks. If this is the quality of just a handful of tracks, then the sooner we get an album, the better.