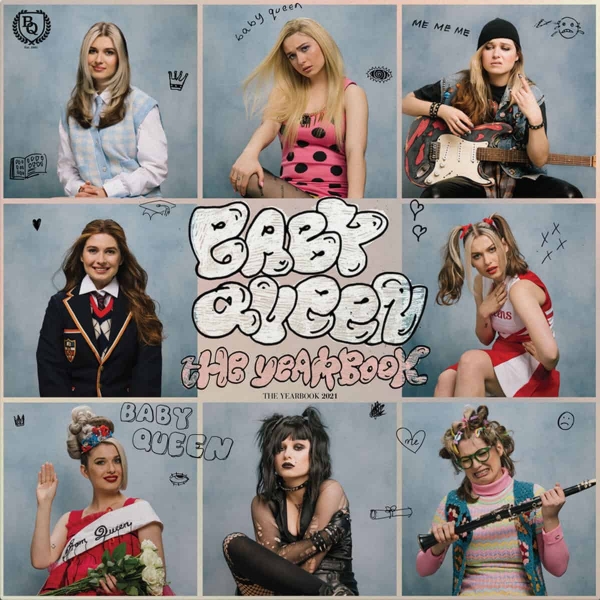 “It’s an American coming-of-age film. It feels confusing, happy, free, lonely…all of these things you go through when you are growing up.” This is how Baby Queen describes The Yearbook - with the sort of vague, non-committal description that’s been blanketed upon the work of twenty-something artists to the point of insignificance, until the only meaning that remains is “pop, but emotional.” Any song can be called cinematic; few capture the intensity of adolescence in true CinemaScope proportions.

Baby Queen’s music belongs to the few, with hooks as massive, indestructible, and crushing as a monster truck. The scene opens with “Baby Kingdom,” with synths stenciled in from a John Hughes soundtrack, but a prologue gleaned from Heathers: sugar overload, flame-doused classrooms, grief-clad clothes. It’s “Raw Thoughts,” though, that actually captures the feeling of “teen angst bullshit” and not just its plot summary; the verses swirl with twinkling chimes, the melody sinuous and delivered stoned, before the chorus throttles and plummets like a car off a cliff.

The Yearbook shines at moments like these, ones that embrace the head-pulverizing maximalism of, say, Charli XCX—5/8 Sucker’s rock-candy hearts, 3/8 True Romance’s neon goth. “Dover Beach,” in fact, feels like it might’ve been the “Boom Clap” of an alternate timeline if it weren’t cued for John Green: static-drill bass, windswept piano, strobe synths. No other track does pop pay-off better than “American Dream” though. What starts off reserved—rim shots as small as finger snaps, golden-hour backing vox—switchbacks into a salvo of shore-breaking cymbals, grunged-up guitars and ice-picking drum hits that give lip bites the magnitude of earthquake tremors. It comes as no surprise that Latham is a fan of Carly Rae Jepsen; her hooks can be pure shout-along sugar with a sprinkle of horniness on top.

In interviews leading up to The Yearbook, Latham described 2021 as a year of “more personal” music compared to the “observational” lens of her last EP, which put a shitposting magnifying glass to Gen Z’s Internet touchstones. There’s still a bit of Medicine’s satire here—from the glitzy, head-empty “Fake Believe”: “Jesus died for me to say / ‘You’re not human; you’re gay’”—but it often feels hindered, less biting and invested. “Narcissist,” in particular, plucks its dry humor from “Buzzkill” and bides its time, smoldering for two minutes before the bridge finally hails down in pieces of shrapnel.

The Yearbook isn’t necessarily a retread of the last year, as its title implies, but an expansion of it; her glam-suited pseudo-Villanelle becomes revamped into something even more brash and punchy. What stands out most on the mixtape, then, are the pockets of quiet (“Dover Beach, Pt. 2,” “These Drugs”). It’s an intimate and desperate side of Latham that, until now, was only revealed sporadically in fragments of poetry on her Tumblr. She gives us a glance of the fragility behind the scenes, reminds us there’s always another part of her waiting to be revealed. This is just the beginning; the end credits read: Welcome to Baby Kingdom.