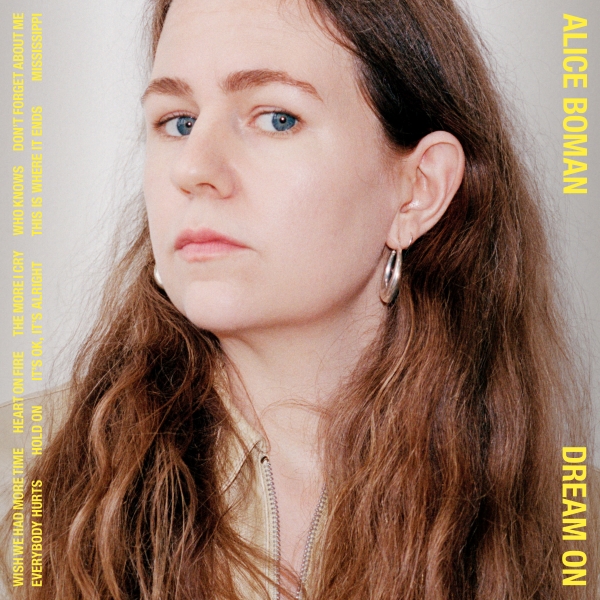 Swedish artist Alice Boman’s journey from her first tentative EPs to this debut LP has been a slow burn, her output both minimal in sound and frequency. 2013’s Skisser EP, and Dreams four years later, did the barely-there, gothic folk thing pleasantly enough, yet we couldn’t have been prepared for just how wonderful Dream On has turned out to be.

Boman has stated that she was in a hypnotic state while making the album, and this very much comes across while listening, it’s as if the chaotic noise of the outside world has is on pause, and all focus is on the raw emotion that's laid bare through these ten tracks. Everything is intimate here, her hushed vocal styling sounding as close as a whisper to the ear, the lazy warmth of the instrumentation all culminates in a sound as cozy as a night in in front of an open fire, expertly masking the natural intensity of inherently sad break-up songs.

The dreamlike otherworldliness of "I Wish We Had More Time" has Boman lamenting the loss of a lover: "And when you take me in your arms / Make me forget it’s for the last time”, warm bass and sorrowful organ underpinning this lullabyesque opening track. The swooning indie ballad "The More I Cry" sees Bowman trying in vain to control her emotions: “So I close my eyes and I’m holding back the tears / 'cos the more I cry, the more you disappear”. The ambition of this track matches that of the newly-crowned regent of indie heartbreak, Angel Olsen.

Though the simplicity of her previous material is evident, subtle, satisfying nuances are all over these perfectly crafted songs, realizing doomy torch songs about the death of a relationship by anybody is heavy going, she avoids this trap with very simple tweaks. "This is Where It Ends" begins minimally, slowly building into a noisy crescendo of retro synths and crashing drum rolls, similar to AIR at their most proggy; the murky dreampop of "Don’t Forget About Me" could happily sit on any of the recent albums by Aldous Harding or Still Corners, while the lusty "Heart On Fire" is a moment of almost-funk, the nearest thing resembling pop, though hearing Ariana singing anything as gut-wrenching as “I know there’s someplace you’d rather be / Somewhere else, not here with me / It’s all over your face”" isn’t on the cards anytime soon.

Hooking up with producer Patrik Berger (Robyn, Charli XCX, Icona Pop) has given her music an explicit clarity. His prowess in the studio with some of some of the biggest leftfield pop artists of recent times gives an impressive breadth to the sound which manages to sound both large-scale and minutely detailed, the unfussy execution perfect for Boman’s introspective and unassuming vocal delivery.