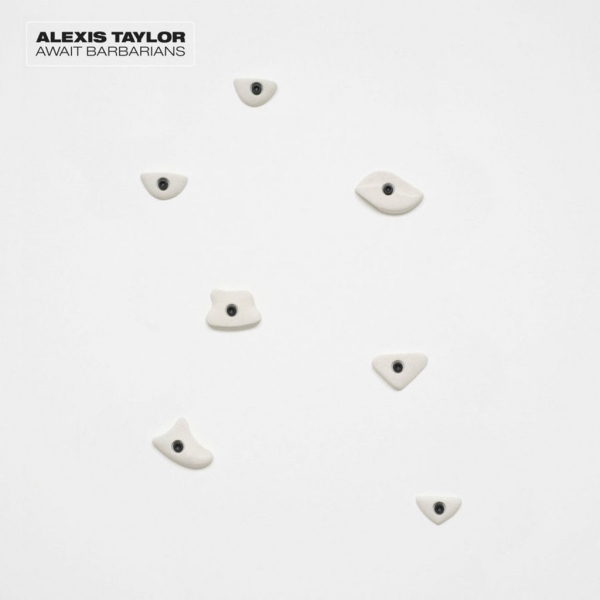 For those of you in class who weren’t paying attention, it’s more or less a year and a half since Alexis Taylor’s last solo release. Back then, the consensus was that the even title Nayim From The Halfway Line was an exercise in levity; one that did not, across the four tracks of retrophilic cut-and-paste samples that made up the EP, reflect a particular desire of Taylor’s to honour through song the miraculous feat of a retired Spanish journeyman footballer.​It was the irreverent and insouciant sabbatical of an artist fresh from making Hot Chip’s fifth album, In Our Heads; an artist content to produce music for music’s sake.

This experimentalism is still on show with Await Barbarians, his second studio album after 2008’s Rubbed Out. Rather than the bopping and shuffling of Nayim…, or the dark, mathematically precise clubland funk of Hot Chip, Await Barbarians is a quiet record of internal reflections bounced off of one another, and (if one is so inclined) a record that with a little digging begins to give up the secrets of Taylor’s musical philosophies.

It begins with “Lazy Bones”, a brief instrumental track of resonant, inflected keystrokes that quiver like sea anemones. Ponderous and inquisitive, its pseudo ambience would charm Brian Eno himself. “From The Halfway Line” bears very little resemblance to its namesake, basking in the languid swell of an Animals-esque Gilmour guitar. Save for the perfunctory percussion that grounds the track halfway through, there is little in the way of form. Taylor delivers a gruff respirator purr on “Immune System”, shivering on its own echoes amidst blunt, arrhythmic synth beats. The studied, repetitious minimalism of “Elvis Has Left The Building” is an understated triumph, a melodiously miserly hymn to Whitney, Dylan, Prince and the King, even if it is overlong by about two minutes. If the best moments from In Our Heads were a series of endlessly complex and interlocking geometric shapes, some of the most arresting tracks on Await Barbarians are like watching ripples magnify and spread themselves across the surface of a liquid.

Even the most compositionally cohesive songs here are situated further to the left of his usual leftfield. There’s no more of the bouncy didgeridoo funk of Nayim...‘s “Hot Squash”, for instance, a song which is made to look positively kitsch compared to “Without A Crutch (2)”. The record’s first single practically a country ballad of sorts, trundling along on a composition of banjo, harmonica and delicate slide guitar (all played by Taylor himself), giving him ample room for some sweet but typically abstruse verses: “You’re stone and my paper’s rough/But scissors this blunt still can cut/It’s not a game we’re playing here/The die’s been cast but it rolls too near”.

The writing on solo records is always touted as being that much more intimate and personal than on an artist’s group work, but what happens on Await Barbarians becomes an almost theological exercise, casting Taylor is a man now turning inward and interrogating himself and his music. “Dolly and Porter” opens with the lines “I try to tell you things (Do you not listen?) … I’m in your head and your heart”, and the light, fizzing drone of “Where Would I Be?” features the line “Your voice, it surrounds me/And I have no choice/But to hear you, try to know you, understand you”. Elsewhere, “Am I Not A Soldier?” has an attractively hollow aspect, as a cushion of woodwind and stuttering keys has Taylor in a vulnerable and revelatory mood: “‘You are so close that I could cry/I have not heard your voice in such a long time”. All that, and he still finds time to include some rhymes about breastfeeding and an interval backed by recordings of duck noises.

The record’s title most obviously calls to mind the J.M. Coetzee novel Waiting for the Barbarians, and in turn the C.P. Cavafy poem from which it took its title. Both dealt with societies terrorised by the ever-present absence of their opposites: they were things that knew what they were only by deciding what they weren’t. Taylor has said that many of the compositions here were the result of stripping from the end result the traditional instrumentation upon which it was built, removing the central form to leave only the subsequent adornments. This is corollary music: songs that are, by their very nature, defined by an absence, just as the work of a solo artist (left in the hands of an unimaginative music journalist) is doomed to be discussed in terms of the group work that it isn’t. But hey, doesn’t “Where Would I Be?” sound like the naked skeleton of a track that would suit Made In The Dark?

Taylor rounds things off with a lethargic and plaintive reprise of “Without A Crutch”, the plucking banjo now a jaded electronic murmur, the clear and crisp vocals now amorphous and preoccupied, reluctant to be led by the melody. For a record that on first listen sounds so sparse, Await Barbarians is a trove of sentiment and intricacy. “It’s hard to know where this came from/And if it’s best left out of song”, he croons on the closer. If he intends to carry on like this, whether it’s with Hot Chip, About Group or under his own name, he can leave it in. ​