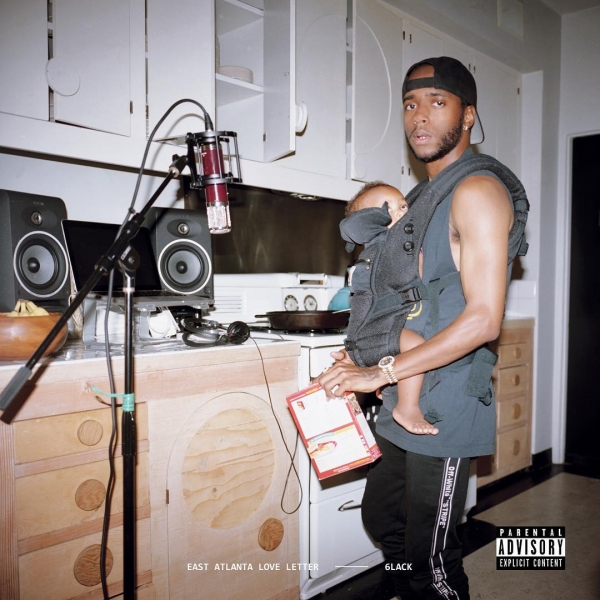 With a casual listen, you could mistake 6LACK’s East Atlanta Love Letter for a break-up album.

It almost hit like a break-up: dropping on Friday with only a few weeks' warning, and trailed initially by cryptic messages on social media. The sound, too – the gentle, often classical instrumentation, the languorous pace, an absence of major keys - has a strong aural association with love lost.

But looking closer, the songwriter's sophomore effort explores themes that are more messy. East Atlanta Love Letter is about negotiating the grey areas of relationships: the threat of world tours and rapid success to their stability; someone's failure to open up spelling the end of an affair; the trials of being a young father in a world characterised by transgression and hedonism. The skits – a nice touch, and nod to 6LACK's hip-hop heritage – draw this motif through the album, with snippets of friends Tierra Whack, Light Skin Keisha and the mother of his child, Jaycina Almond, riffing on love and loyalty.

From its first bars, East Atlanta Love Letter establishes piano as a central element, carrying both the sentiment and groove of many tracks. In opener "Unfair", 6LACK's remorseful half-song to a lover who is slipping away, the keys are everything – reversed to provide a hypnotic intro, laid low in the verses to give the track a palatial space, and pulsating when the beat finally drops. The title track is structured around snatches of piano, too, jump-cut to fall over bar lines. And "Sorry" is made magic by one simple loop, pitched ambiguously between minor and major. It speaks to 6LACK's ability to write melody that the instrument's breath and emotional weight persist through this fracturing production; teamed with strings on "Sorry" and the title track, the melodic backbone alone is heart-stopping, without touching upon the artist's use of his voice.

And it's through his voice that 6LACK really sets himself apart. Since the beginning of his career, he's earned accurate – some might consider undermining – comparisons to The Weeknd for that "sensitive R'n'B baller" sound. But where The Weeknd is polished, 6LACK's words have a raw poetry, like drunk messages left on answering machines. He lacks filter. There are moments where he's second-guessing himself, revising as he speaks. On "Sorry", he throws a few heavy bars about not being able to live without someone, before clawing them back a second later:

Sitting here, patching myself up

Crying over what's left, 'cause

Without you I ain't shit... but no pressure.

Very occasionally, this un-edited flow comes a cropper. Whilst track "Loaded Gun" has one of the most addictive beats on the record – the skittish percussion worthy of infinite pull-ups – the track's title is a reference to the singer's equipment, an analogy which isn't exactly enhanced by the line “point that shit away, these hoes gon' blow or come.”

Elsewhere, the lyrics to "'Stan" feel poised for rapid obsolescence – the refrain's reliance on an albeit now-colloquialised Eminem reference perhaps squandering its profundity. The first time, though, I was too lost in the choir of vocoders and the lilt of 6LACK's voice to notice. And on my fourth listen, the glitch had been absorbed into the mix, forgivable in context of so much other good stuff.

We're living through an age in which the Atalanta trap sound has become uncoupled from detached talk of waves and dabs and club-based debauchery. In using those iconic 808 samples and bass rolls to underscore something more melancholy, 6LACK isn't doing anything new. But he is doing it better than everyone else. With East Atlanta Love Letter, the artist has trumped his opponents and influences with a fragile grace and solid talent for songwriting, echoing that of our most decorated balladeers. It's a hope that the album's use of an undeniably fashionable sound doesn't hinder its potential for timelessness; there is so much here to fall for.