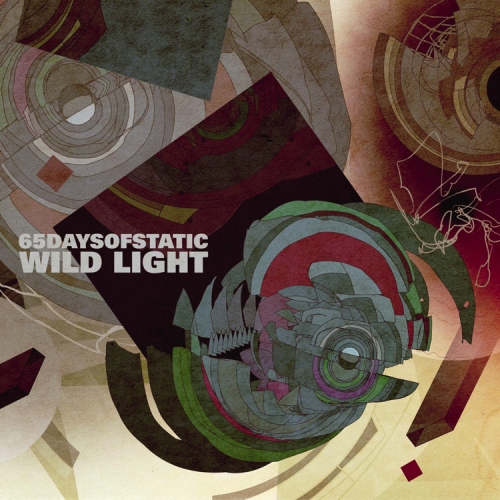 Since making their mark with The Fall of Math almost a decade ago, 65daysofstatic’s strongest suit has been their uncanny ability to constantly surprise their audience. Fans of their first record might, in places, have struggled to identify 2010′s We Were Exploding Anyway as the work of the same band; a collaboration with The Cure’s Robert Smith and the ten-minute, dance-infused closer, ‘Tiger Girl’, were signs of the Sheffield outfit becoming increasingly detached from the math rock sound that defined their early efforts. Their latest, Wild Light, arrives more than three years since their last, unless you count (and you should) the original score for Silent Running that’s been occupying their attention in the interim.

Attempts to second guess which sonic route 65 might choose to go down next have long since been proven naive in the extreme – you’d have a better chance of correctly predicting the lottery numbers – but their obvious interest in dance beats and tracked drums on Exploding at least hinted at a further departure from the guitar being on the cards. Appropriately, opener ‘Heat Death Infinity Splitter’ begins with a sampled female voice telling us “no one knows what is happening”; what comes next is a slow, purposeful, hypnotic buildup of synths, soon backed by electronic drums. You wait for the descent into frenetic electronic beats in the style of Exploding cuts ‘Weak4′ and ‘Go Complex’, but it doesn’t come. It’s a slow-burning introduction that represents Wild Light in a nutshell; 65 have lost none of their appetite for noise, but they have learned the value of restraint.

The band have clearly chosen to move away from fast and furious tempos on this record – none of its eight tracks zip past at quite the pace that much of Exploding did – but the decision to put the brakes on has allowed them to study sonic textures in more detail. The exploration into programming and electronics continues, but the focus on dance is gone; instead, ‘Prisms’ flits between glitchy synths and shimmering guitars, whilst ‘Blackspots’ appears to incorporate both live and electronic percussion and suggests that there’s room for the 65 of new and old to coexist.

There’s space, too, for the band to expand upon loud-quiet dynamics more than ever before; ‘The Undertow’ has more than just a touch of Mogwai about it, and the piano-driven move from relative serenity to a sonic chasm of swirling synth noise towards the song’s climax is thrilling. ‘Unmake the Wild Light’, on the other hand, sees a more gradual progression into a guitar-driven cacophony; it harks back, along with ‘Taipei’, to The Fall of Math, leaning more heavily on live instrumentation than the rest of the record. ‘Sleepwalk City’ is the album’s centrepiece, and presumably deliberately; the focus of experimental live shows at Sheffield’s Tramlines festival back in July, it’s a seven-minute distillation of the ideas explored on Wild Light. De facto frontman Paul Wolinski has described it as “the noise equivalent of screaming into the abyss”, and indeed its second half in particular is positively apocalyptic; an unsettling wall of noise that serves as compelling evidence that post-rock, when done properly, can prove emotionally evocative without the need for even a single lyric.

It’s probably fair to say that Wild Light is a more reserved effort than its predecessor, but on reflection, it’s Exploding that – although excellent – is beginning to look like the sonic anomaly in the catalogue. A return to the more balanced approach of earlier records hardly likely to alienate the hardcore, but you wonder if said reversion indicates an acknowledgement by the band that the opportunity to crossover beyond their own cult fanbase might have passed them by at this point. Not that it in any way suggests regression, though; closer ‘Safe Passage’ is no match for past counterparts ‘Aren’t We All Running?’ and ‘Radio Protector’, but Wild Light as a whole represents the band’s most ambitious work to date; it’s a meticulously crafted and admirably complex record from a band that are constantly thrilling in their unpredictability.