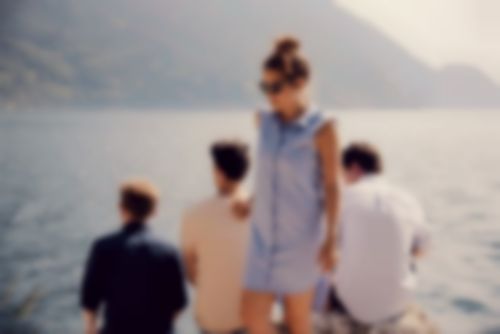 Mausi brought their summery brand of electro pop to the Hoxton Square Bar and Kitchen last night, proving how much their live set is beginning to develop into something more than just a disco dancing night-out.

The Newcastle via Milan quartet, with brother-sister act at the helm, first came to our attention with ‘Move’ the spotless anthem to fun and frolics, and this debut release is a wonderfully smile-inducing highlight from the short set. Its glistening synth refrain leads the way, with Daisy Finetto’s vocal and increasingly assured and eye-catching stage moves encapsulating their genuinely carefree approach.

Echoes of Passion Pit, particularly in a brilliant, heavily strobe-lit finale, and Alphabeat are audible, but their cover of Solange’s ‘Losing You’, mashed-up with ‘Say My Name’ ensured these comparisons did not dwarf the performance. It is their almost juvenile enjoyment that makes the set so watchable as Finetto punctuates the teenage pop number ‘My Friend Has A Swimming Pool’ with improvised screams of “Mausi”, accompanied by a beaming smiles.

The aforementioned set-closer hinted at variation to come and an exciting new depth to their songwriting, which is all this massively likeable outfit require to really establish themselves in the increasingly competitive electro-pop domain.