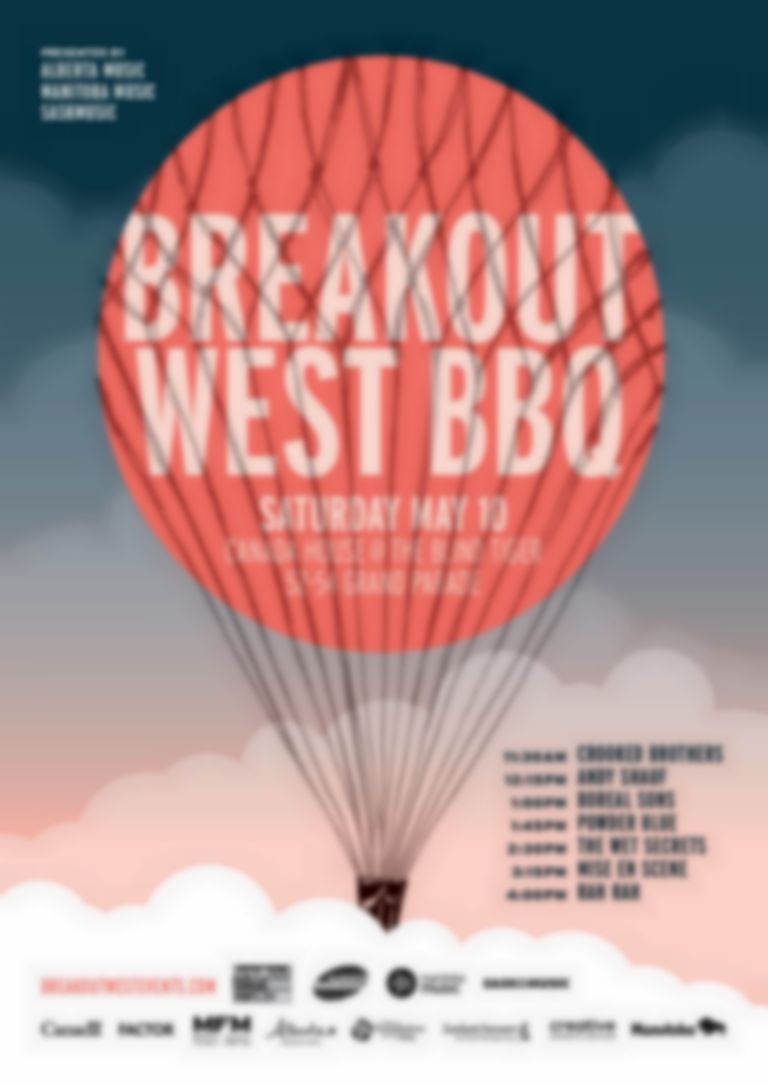 On Thursday, Friday and Saturday this week Canadian Blast will be turning The Blind Tiger Club in Brighton into Canada House, with three days of showcases for The Great Escape Festival. Each day will be presented by a different Province or Provinces, with 16 acts playing over the three days. Over the next few days we will be introducing you to all of the artists performing, with show previews, introducing features and a special Canada House edition of our Oh! Canada series.

Be sure to be at Canada House early on Saturday, as The Blind Tiger Club plays host to the BreakOut West BBQ, featuring 7 acts from the provinces of Alberta, Manitoba and Saskatchewan

They aren’t crooked, and they aren’t actually brothers, and it is highly unlikely that the “High-flying-danger, knife-throwing, back-flips, moon-walks, chain-saws” they are promising for their Canada House show will materialise, but in some cases the trio of Jesse Matas, Darwin Baker and Matt Foster can be taken literally. Their recently released Postcard EP is in fact just one such case: it exists as three songs and a video delivered on a series of limited edition postcards, to be listened to and then sent on to the next person, to keep the music in movement. The EP includes the strutting, harmonica driven “There Ain’t No One”, as well as the swooning Americana of “I Think I Need To Be Alone”.

Having traveled the world, the band are proud of the musical community in their home town of Winnipeg: “Everyone hangs out together and plays together; musicians cross genres openly and defy genre labelling, which in turn creates an open, breathable, accepting arena for the creation of good music.” So proud in fact that they gave us a list of their favourite artists and songs from Manitoba:

The Bearer of Bad News is the product of 4 years of observation, analysis, over analysis and life experience; honed and shaped by Shauf in his parents basement in Regina, Saskatchewan. The result is a record full of songs populated by distinct characters, painted with Cohen-esque precision, all striving, in their way, to cope with the often bleak world they inhabit: the accidental hero, the adulterer, the widower and more. Musically, Shauf’s subtle and sparse arrangements build around his delicately picked guitar, adding clarinet, a solitary cello or delicate piano as required, creating a captivating and vulnerable sound.

Shauf believes there is a certain pervading sound to prairie music, in part due to the fact that the provinces are frozen and covered in snow for about 7 months each year- “It’s like the opposite of surf music or something. Although people do make surf music here…”

Threadbare is the debut album from Calgary, Alberta’s Boreal Sons. Harmonies, electronic fuzzes and warm horns add layers around the piano-led melodies, whilst elsewhere skittering drums drive things forward, creating an atmospheric, big sound. “There’s something about Alberta’s wide open spaces that have influenced our sound. We try to capture a sense of that space and atmosphere in our music.”

The band are no strangers to showcase events, but are hoping things are a little different this time round: “We played a special showcase called the Alberta music series, which is a small event put on in a theatre in Calgary and included acts from all over the province. The lights were down low and it got real moody in there. We chose to play an extra soft and relaxing set. At one point I looked out into the crowd and some people had actually fallen asleep. We took that as a compliment…We’re planning to try to keep people awake this time.”

For fans of: The Black Angels, Warpaint, Besnard Lakes

Back in March we said Powder Blue’s latest single “Run” had the kind of sound that “will still make you draw your coat a little tighter against the chill.” . Growing up in Saskatoon, Saskatchewan, you get to learn something about the cold, as the band explain: “I guess because we’re so far from everything and the winters are so long (seven whole months!) it is easier to focus on music without too many distractions. The bleak prairie winter landscape we live in gives way to an interesting creative state of mind. Our collective sonic output is reflected in the cold harsh realities of where we live. That said, our summers are hot, so there’s room for a bit of warmth just beneath the surface.”

Although Saskatoon isn’t a large city, it seems to be branching out from the traditional country, folk and blues scene the band grew up with. “There’s so many genres and so much great music coming out. It’s just gonna get better…” The province itself seem to be having something of a shoegaze ands psych-rock revival, and the band are quick to single out Shooting Guns as ones to look out for “Psychedelic doom rock at it’s best plus they are super cool dudes.”

For fans of: Marching Bands, The B52s , I’m From Barcelona

Edmonton, Alberta’s The Wet Secrets must surely be Canada’s number one rock’n’roll party marching band. Started as the result of a pact between Shout Out Out Out Out/ Whitey Houston bass player Lyle Bell and drummer Trevor Anderson beck in 2005. Putting together a band of likeminded players, including trumpets, trombones and Congas, the band also put together a striking red and white majorette style uniform. As for the sound, lets just say their second album was called Rock Fantasy for a reason. New album Free Candy is built on Bell’s hook-laden fuzz-bass riffs, part-sinister-part-sunshine melodies, and seriously danceable synth-surf tunes.

As for his hometown, if you were to visit, the first thing Bell would take you to see is the Skyscreamer: “We would probably go to the waterpark in the giant mall because it’s an Edmo cliche…”. Bell sees the city as an Eternal underdog: “It’s a relatively big city but it’s so isolated that it really breeds an intense DIY ethic. We are a western province but it is still another 12 hours to drive to Vancouver, 16 hours East to Winnipeg. You need to hustle to make a global impact…Edmonton is a feeder system for anglo Montreal bands. Guys move there to make it big (work at Starbucks). There are always amazing bands here but it’s a tough place to situate yourself. I love the scene here. Lots of criminally under-appreciated, world class talent here and the tightest scene I’ve ever witnessed.”

For fans of: Giant Drag, The Raveonettes, Neko Case

Saturday is going to be a big day for Gimli/ Winnipeg duo Mise En Scene. As well as representing Manitoba at the BreakOut West BBQ, the band are also up for Pop Artist of the year as part of the Sirius XM Indie awards in Toronto. Pop artists of the year at the XM Indie Awards. For debut album Desire’s Despair Stephanie Blondal Johnson and Jodi Dunlop worked with the likes of Howard Redekopp (The New Pornographers), Howard Billerman (Arcade Fire) and Tony Berg (Beck). “Endless Summer” surfs along on a wave of bouncy bass-lines, jangling guitars and maple syrup sweet vocals, while elsewhere the band bring in elements of twanging alt. country, garage and rock. “We weren’t trying to be anything but ourselves and drew influence from visual artists, film makers, poets, musicians and every day life. The artwork of the album reflects the sound, a mix matched closet of vintage treasures, each piece unique in it’s own way.”

The band our proud of their Manitoban roots, and know that the province has played a big part in where they are today: “Being from a small town and dealing with the freezing cold Canadian winters, you’ve got to find something to do with yourself. Music becomes everything at that point… We have a lot going on here.”

For fans of: The Lemonheads, The Sleepy Jackson, Broken Social Scene

Although The Poet’s Dead will be Rah Rah’s first UK release when it comes out here in June, it is in fact the bands third album. Having formed in Regina, Saskatchewan as a three peice back in 2005, the bands numbers, and experience has grown over the years, on tours with the likes of Wintersleep, Minus the Bear and Plants and Animals. Now an energetic, instrument swapping six piece collective, the band has fine-tuned their alt-rock sound for The Poet’s Dead, and it has paid off- the album was long listed for last years Polaris Prize and shortlisted for Alternative Album of the Year at this years Juno Awards.

It is clear that growing up in Saskatchewan has had an impact on the band- autobiographical album opener “Art and A Wife” details the pattern of influence, with Marshall Burns telling the tale of playing along to old country songs before plugging in and playing along to Crazy Horse songs. These influences seep into the record, both musically and lyrically, with stories of Prairie Girls, farm boys and people being farm from home. “It would be hard to imagine making music that wasn’t impacted by what you’re surrounded by. I think it’s likely impacted indirectly through the weather patterns or the work schedules. I think people who are trying to be creative are always affected, positively or negatively, by what’s around them. We all grew up in the prairies. In one way or another that defines us, and now we’re in a band together.”