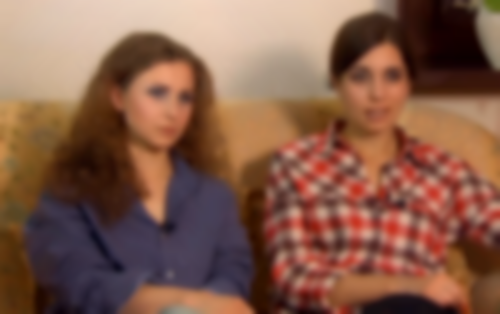 Nadia Tolokonnikova and Maria Alyokhina, appeared on stage in front of TMW delegates, answering questions at an active interview, entitled Culture Riot: Artists And Music Against Totalitarian Rule, about their endeavours in the Russian human rights movement.

“We are offering an alternative to apathy and pessimism”, Tolokonnikova explained as they outlined their continuing reproach to Putin’s “dictatorial” rule in the country. Having light-heartedly explained the irrelevance of the quality of the bands music, the catalytic nature of their activities became clearly integral: “The idea is simple; anybody can be Pussy Riot”.

Other topics discussed included their organic and “unexpected” role at Sochi’s recent Winter Olympics – taking inspiration from the LBGT protests – as well as their views about the on-going conflict with the Ukraine; “We were shocked. We want an agora-style place for discussion.” This, we were told, would simply result in multiple arrests.

The pair also expressed the importance of their anti-Putin stance, rather than any opposition to Russia itself, explaining that the counties education must learn from a Scandinavian system that teaches the importance of civil rights from an early age.

An inspirational start to the festival, Tolokonnikova and Alyokhina are en-route to Kiev where they will support the Ukraine’s position, before encouraging sanctions against Putin at an EU discussion.