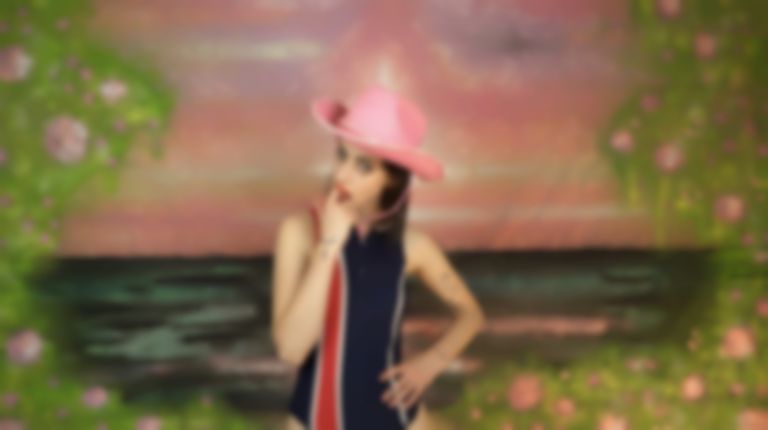 Beth Jeans Houghton, aka Du Blonde, is celebrating her signing to Moshi Moshi by revealing a new album is on the way, complete with a self-directed video for lead track "Buddy".

Du Blonde has announced a new album Lung Bread For Daddy, which sees the self-sufficient artist utilise her multiple skills to try and create the project as independently as possible. "I know exactly what I want my record to sound like," Houghton explains, "and apart from drums, I have the ability to play all the instruments, so I did."

Lung Bread For Daddy will arrive after 2015's Welcome Back To Milk.

Houghton knows her direction, particularly when it comes to visual projects, having made videos for the likes of Red Hot Chili Peppers, LUMP, and Ezra Furman.

Lung Bread For Daddy's lead track "Buddy" arrives with a self-directed video, which features a bath, three bottles of vegetable oil, and hella spaghetti (37 packets to be precise). Check out the video below, and our Q+A with Du Blonde below that.

BEST FIT: Can you tell us a bit more about your lead track "Buddy"?

Beth Jeans Houghton: ""Buddy" is about the final weeks of a relationship. It's about a time I spent walking around London with my ex-boyfriend talking about how we could make it work. I finally ended things with him and when he asked if we could remain friends I said no, went home, and wrote "Buddy"".

BEST FIT: What made you want to make this project by yourself?

Houghton: "I have a very clear idea of how I want my music to sound, what I want my artwork and videos to look like. From a young age I was told I needed to delegate, to let the professionals do their jobs when it came to production or video direction, and for a while I trusted that I would be portrayed as I am, not as another person's idea of who I am. Too often though I would look back after the release of a record or a video and feel a deep regret in having listened to those people. Once they've finished working on an album or a video, they walk away and it becomes a part of their catalogue of multiple works. But for me, this is my legacy, this is how I will be remembered. It came to a point where I thought, do I want to be remembered as some caricature dreamed up by another person, or do I want to be remembered as the person I really am. So I taught myself to produce, animate and direct videos. Anything I needed to be able to do in order to ensure I am portrayed as myself and not a product of another person."

BEST FIT: What is your fondest memory from the album-making process?

Houghton: "I'd say my fondest memory is of the time spent in Oakland, California, at the beginning of the recording process. Jorgen Jorgenson Briggs, Sam Durkes (both from Ezra Furman's band) and I were renting a house on Alameda. Jorgen covered bass and Sam was playing drums. The three of us would head back to the house after recording and sit out on the deck at 1AM drinking Mike's hard lemonade and talking. I remember thinking, this is where I've always wanted to be, sitting with two people I love and respect after 12 hours in the studio recording an album without the input of a large group of people. One evening Jorgen and I were walking home from the liquor store and came across a game of Monopoly on the side of the road. We took it back to the house and realised we had $1000 dollars in a plastic bag that I'd brought to cover expenses on the record. We ended up getting drunk and playing a game of Monopoly with real money on the proviso that everybody gave the money back at the end."

BEST FIT: Did you run into any obstacles? If so, how did you overcome them and what did you take away from the whole process?

Houghton: "Making a record is never as simple as recording a group of songs. There are multiple factors you have to think about and overcome. Like, do you have another person involved who will push for their ideas over yours. This has been a problem for me in the past. Being perceived as a 'woman', and with the nature of the music industry being a predominantly male place, there is often a man involved who believes he has better ideas or more experience who will try to steer the ship in a direction of his own. Too often though this results in musicians not having the chance to show people how they imagined their own songs."

"This time I was lucky enough to work with multiple people who facilitated my ideas, helping me achieve exactly what I wanted without trying to lead me down a different path. If I wanted to record a screaming guitar harmony with a horrendous dissonant note that nobody believed was in tune, I could."

"One obstacle I did run into was having to leave Oakland before the recording was finished. I returned to London, and for a while tried to recreate the recording environment in a different studio with different gear, which is very hard to do. Some of those songs got lost along the way, but during the process I ended up writing an entirely new group of songs that I loved just as much. So the record is made up of tracks from the Oakland and London recordings."

"I took a lot away from the process. I think the key is always to find people who will not only allow you to be yourself, but to support you through that even if things get tough. I found those people and I'll forever be grateful for that time in Oakland. I always wanted to produce my own records, but without those particular people involved, I may never have known that I could."

BEST FIT: How did you come up with the video concept?

Houghton: "I came up with the idea after a rehearsal for the last tour. I was standing with my manager and guitar player and somehow we got onto talking about baked beans. My guitar player said his worst fear was a bath full of baked beans and I said my greatest dream was a bath full of spaghetti. I'd been struggling to come up with a concept for the video and my manager and I looked at each other and both said "Buddy!". A couple of weeks later we spent all night cooking enough spaghetti to fill a bathtub. It didn't feel nice like I thought, it was unnerving and spaghetti kept going up my butt."

BEST FIT: As you've done other videos for other artists too, do you always think about the visual aspect of your music when making it?

Houghton: "I do, usually if I have to make a video, whether that's for myself or another artist, I just sit in my room with headphones on and listen to the song on repeat with my eyes closed. That way I get a lot of visuals playing around in my head like a movie. Then I write it all down and decide wether to use animation or live action. One of the reasons I began animating was because live-action videos can cost an awful lot to make. You need to consider the cost of the location, props, extras etc.. But with animation, I can just sit down and draw everything as I see it, frame by frame. In the video I did for the Chili Peppers' single 'Sick Love', I really wanted to do the scene where the girl is going through a meat grinder before her meat sludge is used to fill in one of those stars on the Hollywood walk of fame. It would have taken a whole team of people to create that scene in real life, yet I could make that happen from my desk at home with a pencil and some tracing paper."

BEST FIT: What are you most looking forward to before the year finishes?

Houghton: "I'm most looking forward to releasing the singles from the record. That has been a long time coming. But I'm always excited to play shows. I'm excited to make videos and GIFS and comic books. There isn't a day goes by that I don't feel incredibly lucky to be able to spend my time doing what I love."

"Buddy" is out now. Lung Bread For Daddy is available to pre-order, landing on 22 February 2019 via Moshi Moshi.