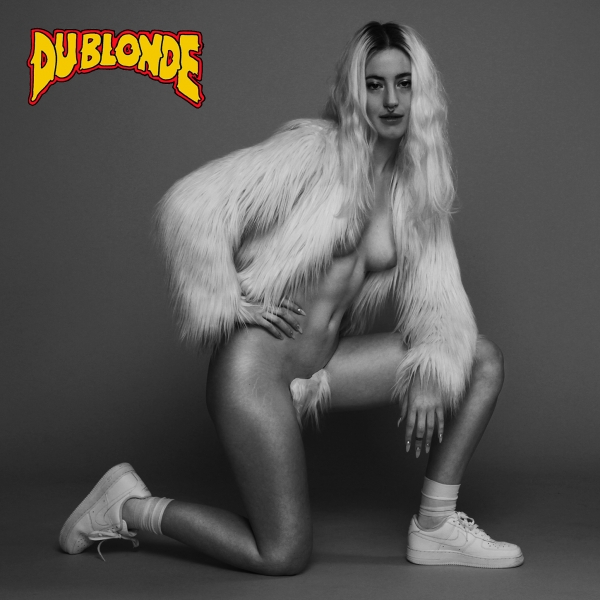 Beth Jeans Houghton is back: restyled, renamed and on the basis of Welcome Back To Milk, her first album under new moniker Du Blonde, pretty damn pissed off, too. Well, that’s the initial impression. Once you become a little better acquainted with the album, however, a more nuanced picture emerges.

Houghton’s previous incarnation, on 2012 album Yours Truly Cellophane Nose saw her slightly dismissively pigeonholed, in places, as a kind of wacky, folky, zany chick. So you can see where the annoyance might be coming from this time around. Statement-of-intent opener, "Black Flag", lays down the gauntlet: “Showdown baby”, she snarls, continuing: “Don’t try me cos I’m not in the mood”.

An effective and judicious deployment of swears, always enjoyable, sounds great when delivered in Houghton’s remarkably versatile vocal, which she can switch from the sweetest of trills to a near snarl and back again at will. “What is it like to fuck your mistress with her hands tied?” she asks, in a faux-innocent croon in "Young Entertainment", while the fury ramps up in "Mr. Hyde" where she describes (a relationship? A scene?): “What a shitstorm / What a fucking nightmare”, advising (us? Herself? An errant lover?) to: “Fuck it up / Tough it up”.

But probe a little underneath these hugely enjoyable bursts of ire, and some more nuanced shades will emerge. Houghton has a wonderful singing voice, gifted with subtlety in its delivery and a great range. And she uses it to convey a range of emotions, subtly as well as furiously.

So there are several rather touching ballads on the album (in fact, much of the lyrical content suggests a break-up theme). "After the Show" mourns the end of a fiery relationship, where “the love that we made was a love hotter than hell”, in a just-this-side-of-cheesy power ballad format. "Hunter" is both elegiac and beautifully-paced, as Houghton sings of an ex’s new relationship: “I hope that she keeps you happy at home (like I know you wanted)”. "Four In The Morning" is beautiful and love-laden, telling of the moment when you “wake with somebody who treats you right”.

More out-there moments are less in evidence than on Houghton’s previous material, to the overall benefit of the music. So there’s more of a concentration of tough-edged music (the bass-heavy opener to "Black Flag", "Chips To Go"’s near-shouted vocals and hard riffs) than the occasional off-piste (as opposed to pissed-off) moment.

The few of these that remain – an excerpt of "Knees Up Mother Brown" sung by children at the end of "If You’re Legal", an old man’s spoken reminiscences, outlining his philosophy of life at the beginning of "Isn’t It Wild", the typically flamboyant guest vocal contributed by Future Islands’ Samuel T Herring to "Mind Is On My Mind" – are perhaps the album’s least satisfying parts.

Overall, though, this is a satisfyingly substantial listen. Houghton has managed to marry her way with a melody and an arresting image with a splash of ire and a dollop of heartbreak, resulting in a hugely likeable and enjoyable whole. What’s in a name? Not much, perhaps. But changing hers seems to have had a largely positive outcome.