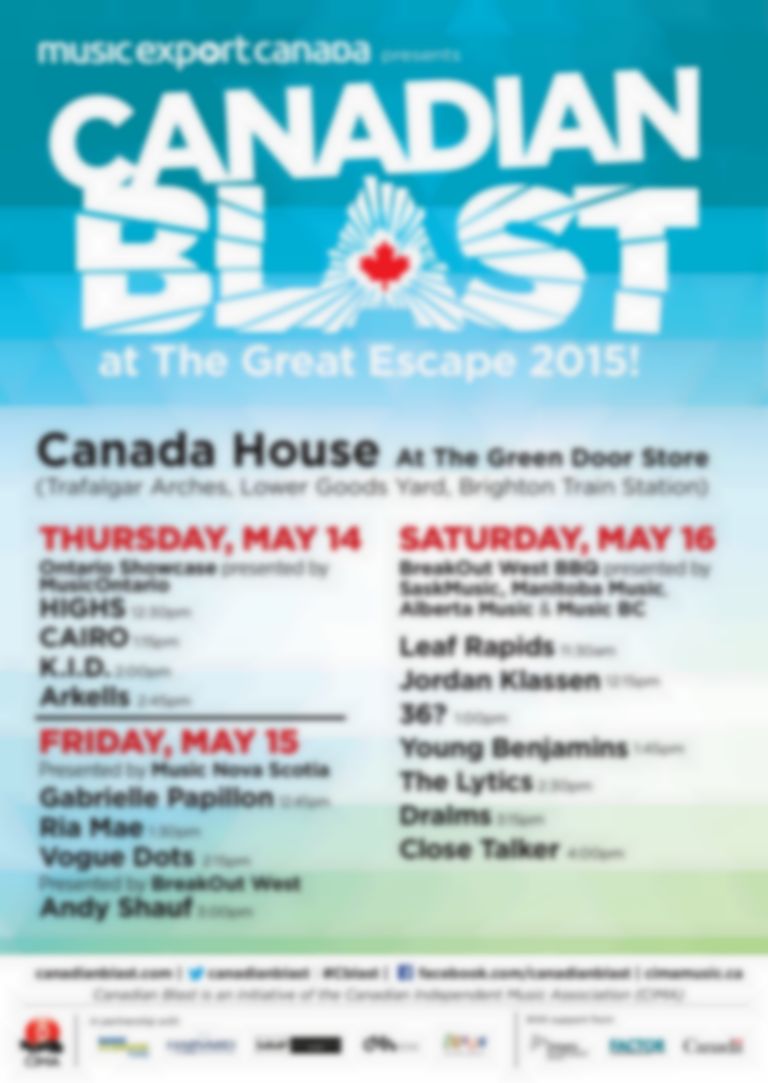 This weekend sees Brighton yield its transgressive seaside charms over to the big bad music business as the UK’s yearly showcase of new sounds kicks off as The Great Escape crashes into town.

Part-SXSW, part dental convention for the music industry, The Great Escape is first and foremost a chance to see some of the best emerging music from around the world. While Eurovision will dominate almost every pub in Kemp Town on Saturday evening, there’ll be a different kind of international stand-off scattered across the city as the best and brightest bands play a serious of country-specific showcases.

We're partnering up with the almighty Canadian Blast once again (the folk who promote Canadian independent music in places like the UK and US) to help shine a line on the amazing music coming out of the great country.Dominating over three nights at The Green Door Store, the line up is as sensational as it is varied and we've put together a guide to help you out, alongside a Spotify playlist.

The Saskatchewan-born Shauf offers up a timeless mix of melody, voice and lyrics that as comfortable as it is impressive. The singer/songwriter began playing in bands at the age of 14 and dropped three EPs before he hit his twenties - the mature-before-his-years cliche might very well have been invented for Shauf.

Since winning a Juno for New Group of the Year in 2010, Hamilton, Ontario five-piece Arkells have clocked up three long-players. They added a second Juno in 2012 for Group of the Year and have carved out a workmanlike reputation for intense touring and amazing live shows.

CAIRO have already been called ’the love child of Gotye and Arcade Fire’ which isn’t so terrible since they channel the best of both those worlds into a thoughtful and emotionally affecting sound. That last song they’ll be playing at the indie disco when you failed to get the girl or boy of your dreams? It’s probably gonna be by CAIRO.

Close Talker is an indie rock quartet from the great plains of Saskatoon. With subtle earworm melodies and blood harmonies set against tightly wound rhythms they have drawn comparisons to Bon Iver, Local Natives, and Bombay Bicycle Club.

Dralms is the latest project led by songwriter Christopher Smith and is more a reinvention than a fresh moniker. The band’s first release, Crushed Pleats, has a swampy ambience and deep bass pulse. Beyond the poetic prowess of the lyrics, the band’s strength is their ability to devise all-consuming instrumental build-ups.

After high-school, Kara and Bobby were deemed unfit for higher education. The two found themselves dwelling in their alcoholic mother's basement and tracking demos they would later classify as "garage pop". Their debut release features cuts like "I Wish I Was Your Cigarette", a gritty ode to the anguish of youth and unrequited love, and "Stoned on the School Bus", a dreary ballad delivered from Kara and Bobby's melancholic perspective.

Rap crew The Lytics' joyful sound gives meaning to the words 'sick music'. They're top of our list to catch this weekend in Brighton.

Coming out of Saskatchewan, Young Benjamins are fronted by the UK born Neusha Fransaskoismulti and see an experimental approach to folk-flecked indie rock, predicated on a brave and satisfying vocal and instrumental interplay.

New Brunswick duo Vogue Dots - Babette Hayward and Tynan Dunfield - take an experimental approach to dream pop dance and add emotion, angst and humanity. The band have been namecheck by the likes of Rich Aucoin and look set for great things.

We remember Vancouver-based Klassen from his amazing take on Haim's "Falling" which dropped late last year. His own music - self-described as "fairy folk" - is as imaginative and complete with an oodles of personality.e

Hailing from Halifax, Nova Scotia, Mae's alluring folk-pop sound weaves around lyrics with intelligence and wit. Recent single "Clothes Off" saw her break into more radio friendly territory and a related remix EP also served to show how versatile a vocalist she is.