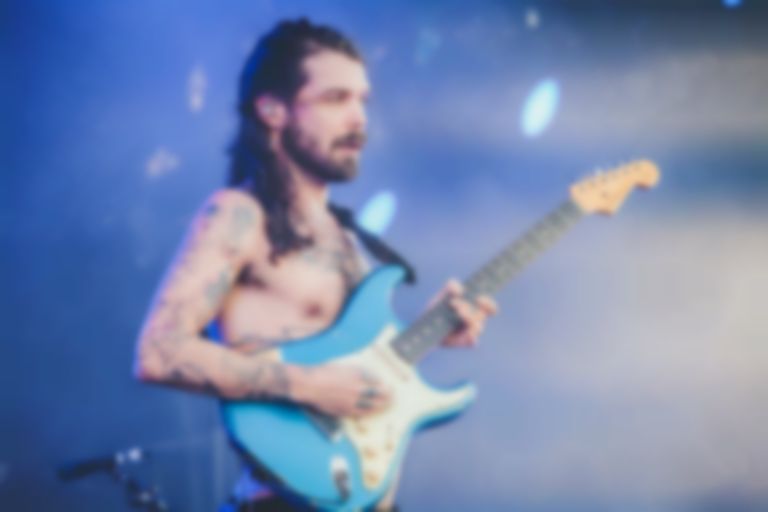 Simon Neil of Biffy Clyro has announced the launch of his first ever guitar pedal - a distortion pedal titled BOOOOOM - BLAST.

The BOOOOOM - BLAST distortion pedal was created in collaboration with Neil's longtime guitar tech Richard "Churd" Pratt, and marks the first ever signature pedal from the Biffy Clyro vocalist.

A press release states that Churd designed and built the pedal from scratch, teaching himself engineering and electrical skills along the way.

The pedal is limited to 200 units, and each one will be painted and signed by Neil himself with a handwritten thank you note.

Neil first debuted the BOOOOOM - BLAST pedal during Biffy Clyro's livestream show at Glasgow’s Barrowland Ballroom that celebrated the release of their latest LP A Celebration of Endings.

The limited edition Simon Neil Booooom / Blast pedal is available to pre-order NOW. Catch Simon on @thatpedalshow now to hear more about the pedal and watch a demo. Watch now and pre-order the pedal at https://t.co/Lj8TYpyKP4 #booooomblast #guitarpedals pic.twitter.com/kwBxAu4P5l

The Biffy Clyro lead vocalist says of his pedal, "Creating this pedal has made me miss playing live even more, because I'm desperate to play shows with it. It’ll be a part of my set-up going forward and it’ll be on every recording. It’s the pedal that I’ve been looking for most of my life. We’ve taken our time to ensure that it’s everything it can be. It’s been a real labour of love."

Churd adds, "The aim was to capture Simon’s sound in a box, so anyone can play guitar and sound like him. It was much easier said than done! It’s one of the most transparent loud overdrive pedals on the market. With so many distortion pedals you get loads of fuzz and saturation, but with this the guitar still breathes. You still hear all the notes but with the extra weight and overdrive."

Simon Neil's BOOOOOM - BLAST guitar pedal is available to pre-order now and will ship by 31 January 2021.