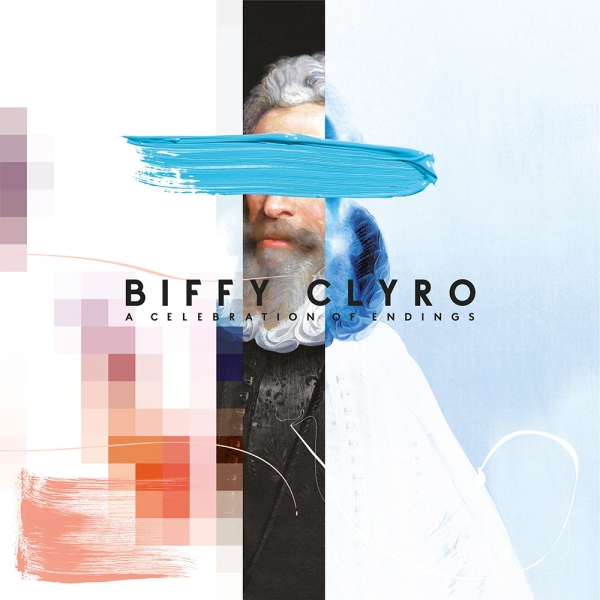 Alternative-rock titans Biffy Clyro are striding out with the confidence of a band who are perpetually on top form, and striving to outdo themselves.

Finding no comfort in safety as they usher their ninth studio album, A Celebration of Endings, out into the world, their sound remains solidly recognisable as their own, whilst also propelled to new heights of experimentation and ambition amidst a generation of critics who seem dead set on hammering in the nail of guitar music’s coffin. With Celebration, Biffy illustrate that guitar music isn’t just alive and well - it’s bloody thriving.

Anthemic choruses abound, coated in blistering guitar riffs and the visceral energy of a band that have long graced the stages of the world’s biggest stadiums, their newest record is a spectacular show by its very nature. The juddering, off-kilter guitar rhythms and blaring choral vocals of opener "North of No South", strike an urgent welcome to a record that sits at the cusp of simmering, overflowing emotion. With questioning refrain “can you feel it?” rising at the top of his lungs, Simon Neil fronts a band who continue to solidify their place as one of Scotland’s Greats, and inarguably one of the best Scottish rock bands on the planet.

With their newest offering, the trio traverse an incredible diversity in sound. Album highlight, "Weird Leisure", feels more feral than Biffy Clyro’s usual take on rock, painting a picture of damning frustration in its racing urgency, centred on a gritty take on pleasure in all its forms — from love, to obscenity in excess. In contrast, gorgeous piano ballad "The Champ" tells a bitter tale of a relationship’s demise, positioned at the heart of an argument that crashes into a bass propelled anger. As centrepiece "Space" floats in, soaked in piano-led softness, the glowing track of hopeless romance conjures images of flickering lighters in the distance of arenas, gracing the record with elegant orchestral crescendos taking flight. With Neil’s unmistakable Scottish lull running through the album, the band’s ability to switch effortlessly between energetic, grunge-fuelled rock songs and sweet, emotional poignance, is something to be wholeheartedly admired.

As A Celebration of Endings roars into its chaotically experimental 6-minute closer, it is evident that the band are far from finished themselves. Dripping in fresh ideas, and fully confident in their own absurdities, "Cop Syrup" frames itself around a gloriously soaring cinematic orchestra. Departing their usual alt-rock sensibilities with a wailing, screaming vocal effort that sounds more suited to a '90s hardcore group, the track is adrift with high pitch strings juxtaposed with near-carnivalesque madness. Propelled into frenzied disarray, the album ends in what is undoubtedly a joyous and heartfelt celebration of the past, and a thoroughly self-assured leap into the future.