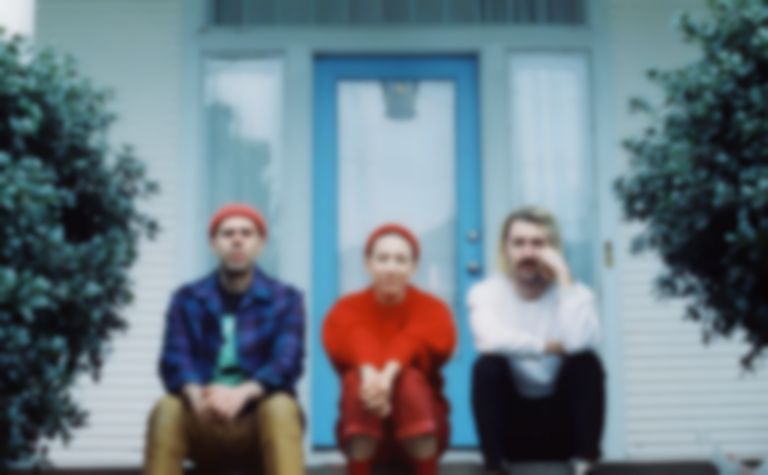 Known for their soothing soundscapes and dream-pop melodies, Coco release “Anybody’s Guess” – the trio’s final offering ahead of their self-titled debut album.

Having respectively crossed paths throughout their elusive music careers, it feels inevitable that the joining of Maia Friedman (Dirty Projectors, Uni Ika Ai), Dan Molad (Lucius, Chimney), and Oliver Hill (Pavo Pavo, Dustrider) has manifested into a project like Coco. After originally arriving as an anonymous outfit, the trio’s union has incited flowing chemistry and seamless amalgamation of sounds that has led to their upcoming debut album.

“Music sprung up between us with a surprising and collaborative ease. It felt like a creative playground in contrast to the demands of our other projects,” share Coco. “From the beginning, we made a conscious effort to foreground our intuitions and trust each other’s first instincts—criticism and indecision weren’t a part of the process.”

Following on from the release of “Knots” and “Come Along” earlier this year, Coco now rounds off their embryonic period with “Anybody’s Guess”. Ebbing and flowing between divine harmonies and gentle instrumentation, an irresistible bassline undulates through hushed “doot doots”.

The track only breaks for an angelic vocal line from Friedman as her sweet solo delivery elevates the reassuring and comforting undertones. “Anybody’s Guess” cements Coco’s unique ability to fuse their disparate influences to form heavenly and meaningful dream-pop gems.

The accompanying music video, directed by Anna Lian Tes and Stella Hartmann, perfectly captures the story of the track, taking the audience on a journey through a woman's subconscious and how it develops following an undefined night of love.

“We shot in Stella's home and contrasted it with the expanse and varied environments of Malibu Creek State Park. The final moment of becoming the most glamorous, strong, sparkly woman will hopefully leave the audience thinking, she is going to be okay no matter what. The unknown doesn't matter. Let that night of love be what it was,” Coco explain.

On the creative process behind the new single, the band share that “Anybody’s Guess is the last song on our record and serves as a summary of sorts. It was pieced together from a few different sketches and went through a handful of iterations. In general, we were thinking less about traditional song form and more about creating a narrative arc through scene changes - a suite.”

The band credit manager Bob Moses as the force behind their upcoming debut record, following his passing in December 2020. Speaking further about the self-titled record, Coco note “We wanted the songs to speak for themselves, without the influence of association. When we went back into the studio, we built each song together from the ground up—a practice in democracy, splitting up instrumental, writing, and production tasks evenly in every sense.”

“Anybody’s Guess” is out now, with the debut, self-titled album Coco set for release on 29 October. Find Coco on Instagram.