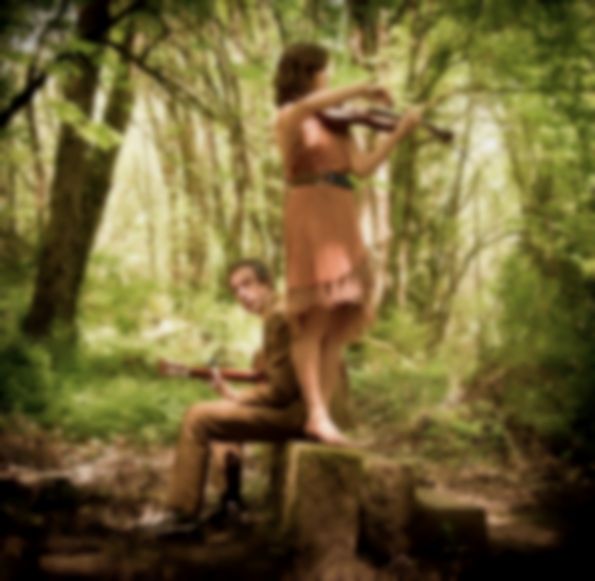 Assuming that, like us, you loved Joanna Newsom’s 2010 magical sprawlment Have One On Me, chances are you will recall the name Ryan Francesconi, for it was he who arranged the 3-disc set and also played the banjo, Bulgarian tambura, acoustic guitar, electric guitar, electric bass, kaval, mandolin and soprano recorder on it. When Newsom toured the record, Francesconi was a prominent part of her live band and his musicianship proved to be just as watchable as the long-haired, harp-tingling maiden.

Hailing from Portland, Francesconi graduated from the California Institute of the Arts boasting degrees in both guitar and composition. Aside from a passion for Baroque, Americana and jazz improvisation, it is his love of Balkan folk music which takes centre stage in his musical leanings. Following on from his debut solo release Parables a couple of years ago, Francesconi has joined forces with partner and fellow Newsom-collaborator, Mirabai Peart on Road To Palios, a 7-track album inspired by their visit to the Grecian isle of Lesvos. Peart’s violin intertwines with Francesconi’s acoustic guitar, bringing the listener refined and assured instrumental duets of delicate beauty.

Here, The Line of Best Fit speaks to Francesconi about his background, his road to becoming a musical virtuoso and Road to Palios.

When and how did the idea for a collaboration with Mirabai first come about?

Ryan Francesconi: Originally, we were just working on some Bulgarian tunes together for fun. Up until that point the guitar music was very much a personal solo project and I wasn’t particularly interested in having any additional instruments with it. Part of the challenge was to force myself to compose for the solo instrument. As an experiment I arranged a violin part for the tune ‘Road To Palios’ quite a bit before I had finished writing the rest of the music. It definitely added another dimension to the music. After that, I started writing in more violin parts into the newer pieces.

The idea of it being an album of mainly duets evolved slowly and, by the end of the writing process, I was writing specifically with that in mind. It’s not exactly a collaboration as I’ve notated everything exactly but Mirabai dedicated so much of herself into the playing and development of the music that she deserved to be recognised for that.

Aside from the obvious factor of working with Mirabai, how did the making of Road to Palios differ from your work on Parables?

It’s amazing what adding just one more person into a process can change. It took much longer to record because of the added logistics of being in different countries a lot of the time – Mirabai is Australian. I think that extra time helped the record a lot, it gave more time to let the music breathe. We performed the music a fair amount before recording it this time as well. I think those things really help make a stronger performance.

Do you remember the first piece of music you ever wrote?

Yeah. It was a kind of power chord skate rock jam that just went E F E G over and over again with lots of distortion.

You have been described as an expert in Balkan folk music – for the lacking in knowledge: would you say that Greek folk music is substantially different to Bulgarian folk music?

Yes, they are different. I think in many ways the language of the singing changes the feeling so much. Near the borders, often the music can sound very similar but the change of language does a lot to colour it. There are many different types of both Bulgarian and Greek music – so it’s actually rather vague to just refer to it as a whole. When I was younger I preferred the Bulgarian music and, as I get older, I’m more likely to listen to the more peaceful, slower Greek music. In particular, the music from the Islands of Epirus. Those are the most magical for me.

Was the album actually written in Palios?

I don’t think any of it was written in Greece, actually. The only thing we did in the village of Palios itself was go for a nice swim…

Have you ever been asked to compose music for film? Is that something which interests you?

Yes. I have done a few. I enjoy it a lot, actually, and I am working on a film score at the moment!

Which other musicians do you consider as your inspiration?

When touring this album, do you tend to remain loyal to the recorded renditions or is there scope for improvisation?

With the exception of a short violin solo in ‘For Christos’, these pieces are 100% through-composed. We might improvise in some other contexts, though. If I bring the tambura we have some very open spaces to play with.

Is there a particular track on Road to Palios which you have a soft spot for?

You must be sick of being asked about your work with Joanna Newsom but… indulge us: how did your musical involvement with her first come about?
She thought I might be able to help turn ‘Ys’ into a folk band. I think we sort of pulled that off ...

Do you anticipate working with her on her next record?
Hard to say right now. That’d be nice, though!

Road to Palios is out now on Bella Union.