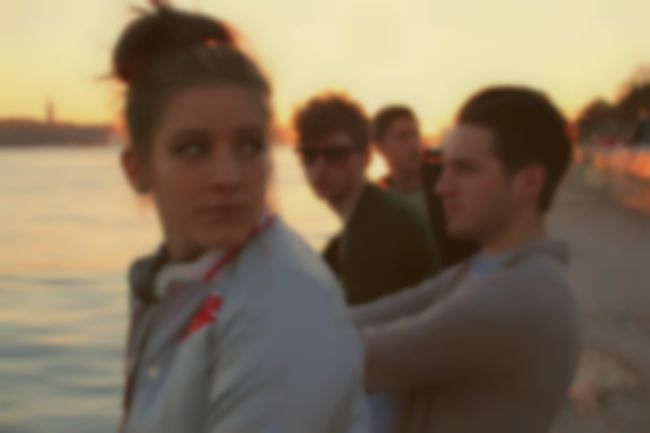 Mausi are still pretty fresh-faced and new to the big bad world of music. Free from cynicism and unburdened by months of sleeping in cramped Ford Transits, they’re a relentless shot of power-dance, infested with pop charm and infectious electro-indie hooks.

Filed somewhere between Alphabeat and Passion Pit on your record shelf (if record shelves still exist?), the peppy electro-popsters are filled with a glorious youthful naiveté, the same kind you get before embarking on a holiday with mates or the journey of a lifetime. And for these four confident comrades, it is. Their upbeat euro-dance stomper ‘Move’ could soundtrack a thousand pre-drinking sessions; their first effort ‘sol.’ could back sojourns to blistering beaches. Though their songs are few and far between, there are promises of much, much more from this energetic foursome, with the potential to soundtrack the best parties, holiday romances and summer memories of a generation. We chat to Daisy Finetto about the origin stories, their love of Sophie Ellis-Bextor and how Mausi is a woman from the French Riviera.

Tell us a bit about the band – how did you form? Where did you start?

Me and my brother used to live just outside Milan. Five years ago he moved to go to Uni in Newcastle and he played in some bands, straight away he met Ben . A year later I happened to go to Uni in the same city, joining in with the band as backing vocalist to start with. I slowly started writing and we eventually all found Benji . We started playing together and all writing music, and then about two years ago we wrote ‘sol.’, which started the whole aesthetic we have now. A lot of Newcastle music is guitar bands trying to be rock/indie, which we originally tried to conform to, but then realised we were more influenced Pony Pony Run Run, Daft Punk and Phoenix. We found our sound through those influences and not trying to be the same thing as everyone else. We’re about feel good summers and European escapism.

What’s the band name about?

We were searching for ages! It’s actually the name of one of my best friends. Well, sort of, it’s a nickname. ‘Mausi’ means ‘darling’ in Austrian-German. It’s a term of endearment, but doesn’t really mean anything. We wanted something that didn’t mean anything in English so we could create a brand. We wanted a short, simple word that sounded European.

What have you set out to do with the band?

I guess were trying to make credible pop. A lot of people were like ‘you might be offended by this… but it sounds like pop,’ but we wanted to do that and make people feel good! We’re not scared of that label, but we want it to be credible and reach audiences and make people let go. We have a lookbook of imagery for band meetings, full of songs or brands or pictures we like. Everything we do stems from an image, starting with buzzwords and creating playlists from that image, and then we write what comes from the strong visual aesthetic.

Mausi looks like a sophisticated French woman from the non-touristy part of the Riviera.

What was the inspiration for ‘Move’?

The lookbook for the song was similar to the video. It’s about going to a European city for the night, going with the flow having a good time, dancing like you want to dance, letting loose by running around in a city you don’t really know. We went to Lisbon to record the video, and in the end it is just us meeting random people and dancing around on a night out!

How about ‘sol.’, what’s the story behind that?

It was the first song for Mausi. Songwriting takes a while to find the sound you want, and ‘sol.’ was when we discovered our sound. Me and Thomas were in Newcastle, we decided to go home to Milan with the guys, and we just filmed everything. We came back to the UK and made a video of the footage we had. We then thought it would be great to write a song to it, like a soundtrack almost. It was inspired by driving in the car and going to the beach and having no commitments and the summer haze. It’s about having a nice time in the sunshine, but it’s not a cheesy Ibiza video. It’s quite personal, showing a different side to an Italian summer. It’s very much a foundation in our journey.

Have you got anything concrete for an album yet?

We’ve started recording a few songs. We’re almost finished, there are a few more songs we still want to write, but it’s all coming together. At the moment we’re just about getting the right people on board and getting some cool people to produce. We’re really happy with it, and hoping to release it this year. It will be exciting! There are a few songs that are, as our manager says, bangers.

Which artists influence your music?

We listen to a lot of French pop – Phoenix, Daft Punk. Talking Heads are great, we love old school pop. We like a little of the Kanye, we’re not afraid to admit it! Breakbot is great. We take inspiration from a lot of different places… recently it’s been Sophie Ellis-Bextor. A bit of Justin Timberlake is always nice too!

What song do you wish you’d written?

‘This Must Be The Place’ by Talking Heads – it’s a damn good song. That, or anything by Phoenix.

What was the last record you bought?

Solange’s stuff, I’m loving her. It’s super ‘80s stuff. You know her ‘Losing You’ video in Cape Town? We love that vibe.

The first one we did? We were reminiscing about it recently! We went for drinks there last night, the place is called The Head Of Steam in Newcastle. Our first show was us still finding a sound, playing covers with a few of our own tracks thrown in, but we were unsure of our own music. It was funny. I remember we tried to do a cover of ‘Hide And Seek’ by Imogen Heap… Thomas sang it with a vocoder and it just went horribly wrong. The room went silent. We didn’t realise how bad it was to start with, we thought it was a good, stunned silence!

Full of energy! There’s lots of imagery to everything we do. We bought a projector to project images onto us as we’re dancing and singing on stage. We have two slower songs at the moment, and we like to bring the crowd in there. Our shows are like a journey with movement in some parts and chilling in others. We like to see the crowd dancing! We love playing live, and we’ve got lots of gigs coming up.

Playing lots of gigs, finishing and hopefully releasing the album. I guess just playing more. We’ve got supporting slots with Chad Valley and The Other Tribe, hopefully a few more support slots might come up, or even our own tour! We’re doing Great Escape too, hopefully. We shall see what 2013 brings us…