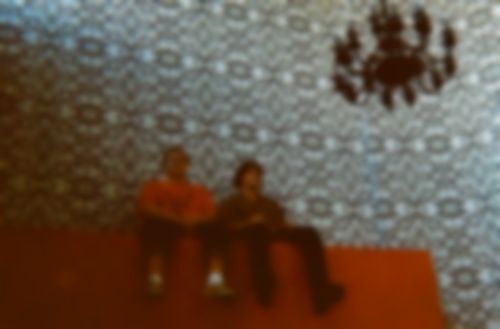 The turbo-charged hype cycle being what it is, a young band barely out of nappies can hope to win immense blog fame within weeks of thrashing out a demo full of sound and fury recorded in an aunt’s garage. Conversely, they should probably expect to hurtle back into crushing obscurity the very next month when their second single is leaked, fleetingly chewed over and then spat out, disregarded for the next big new thing.

Whether they intended to or not, Young Buffalo buck the trend a little. The band come from Oxford, Mississippi and, rather than a bunch of college wasters, consists of a duo of teenage pals fresh out of high school, weaned on Led Zeppelin and The Beach Boys, and keen to fulfil modest goals: to ‘make good music’ and ‘not be douche-like’ – all whilst taking their sweet time about it. In their press shots they’re generally depicted lounging around, shyly declining the camera’s gaze in someone’s living room – often someone’s dog is present, too.

That stance of extended repose extends to where they are today – which is exactly where they started, geographically speaking. Forgoing the traditional, business-like relocation to the bright lights and coastal elitism of wealthier marketplaces like Brooklyn or Portland, the band still reside in the American deep south; a region that makes up for its lack of art-school cool with its own impressive history of great acts – R.E.M, OutKast, Neutral Milk Hotel – if not a faded sense of importance from a time before regional sounds became globalized and gentrified, before Taylor Swift did dubstep drops.

That’s not to say that the band is amateur. But there is something comfortably pre-Internet, pre-blog about the band’s origin story. Besides, they’ve made leaps and bounds in other sense, if not in self-presentation or real estate savvy. Since their founding, the group have undergone a few evolutionary tweaks and personnel changes, (their current line-up: a streamlined song-writing duo complimented with an additional touring cast) and released a steady trickle of demos and singles with a clear strummy debt to the Fleet Foxes before following up with a scattering of EPs – four by my count – spread over the past couple of years, each with its own outstanding ear-worm and displaying collectively a gently curving, deliberately thought-out evolution of sound.

This year, matured and battle-hardened – the band are now in their twenties and supported Arctic Monkeys (the accelerated blog-hype band par excellence) on their 2011 Suck It and See tour of the States – the duo are set to take advantage of their carefully accrued capital with the release of their self-titled EP, which features their finest track to date: the spectacular, sun-dappled ‘Nature Boy’. But what does the future hold, who are they really, and why haven’t they released anything as ambitious as a LP in the best part of four years? We caught up with young duo to talk switching instruments, Oxford, Mississippi, and formative influences.

Who makes up Young Buffalo today?

Young Buffalo is Ben Yarbrough and myself, Jim Barrett. We play live with the help of our friends Len Clark and Will Eubanks.

How would you describe your sound nowadays?

I would describe it as heavily pop-influenced rock. We love melodies, but we also love the guitar and big drums.

What inspired you all to first start making music?

It’s just kind of something we picked up when we were about 12 and haven’t stopped. I’d say we’re inspired by folks making music here in Oxford, MS, and also a lot of the classics (Beatles, T Rex, Beach Boys) as well as present day stuff (Deerhunter, Panda Bear, etc)

Seeing as you’re quite a young band, would you say it’s been tough learning as you go?

It hasn’t been easy! It’s tough sometimes to know the best decisions to make in regards to shows/records and stuff. I’d say the learning part has been such a big part of our band up to this point… The HARD part is moving past making some bad decisions.

‘Nature Boy’ has some nice Beach Boy-type harmonies and pretty afro-beat melodies, but there’s a few tracks that are a bit rockier and shambolic. Is there a wide range of influences on your sound?

There is a wide range of influences for both of us. A lot of 90’s stuff like Sonic Youth, Dinosaur Jr., and My Bloody Valentine. 60’s pop/psychedalia, definitely. We cut our teeth on Led Zeppelin. I’m pretty sure I listened to Led Zeppelin for a solid two years.

Oxford, Mississippi seems like it’s stuck in the shadow of Nashville or Athens, Georgia when it comes to the big cultural hubs of the south. Is it a good place to be a band?

Oxford is overshadowed by Nashville and Athens, but I feel like Oxford puts up a fair fight as far as far as culture goes. It’s an absolute outlier in Mississippi, and the South I believe. It’s a college town, so we’ve got a large amount of artists, writers, and musicians. It’s a great place to be in a band because it’s super cheap and it’s boring enough to where you can get a lot of writing/recording/practicing done. A lot of folks come out to shows, and most everyone plays in each others bands and supports each other for the most part.

Watching a few of your live videos on Youtube, you seem to swap instruments quite a lot. Is that going to be a permanent thing? Does it impact on how you write and record?

Switching up was the gimmick we used out of necessity when we were a three piece. Now it’s mainly Ben and myself writing the parts, and then we translate it live with the help of our friends. We still switch around on guitar and bass, but it’s not a highlight of what we do now.

What have you been listening to lately?

If you could each only listen to one record ever again what would it be?

Stevie Wonder Songs In the Key of Life.

What’s next for Young Buffalo?

Well, for the rest of this year we’re writing our first full-length and demoing and stuff. We might get over to the UK before the year is out, but mainly demoing and then recording the full-length. Look for it summer ’13 if the world doesn’t end!