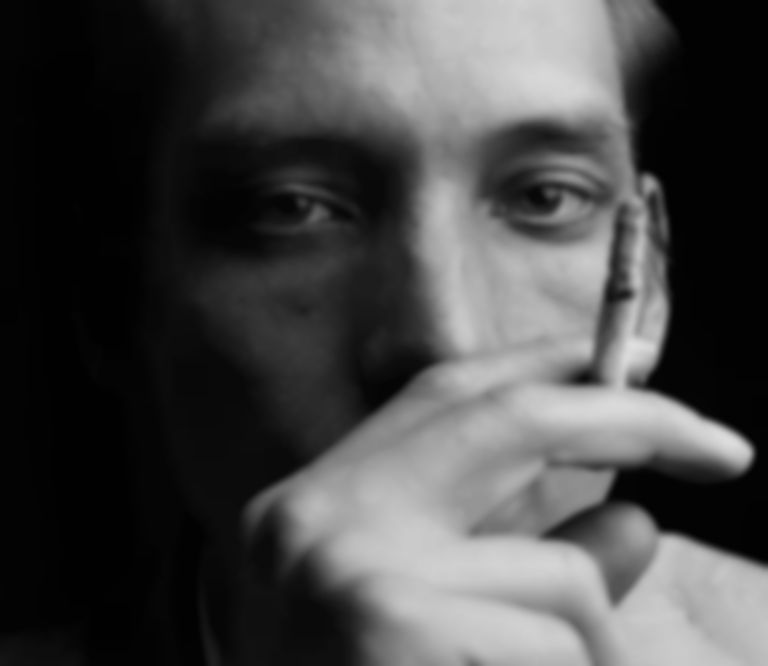 Known for his effortless command of poeticism and darkly intriguing melodies, Thomas Azier has returned with a four track EP that pushes him further than ever before.

Originally impressing us with the self-released Hylas and Rouge, and tracks such as the insatiably brilliant "Winners", Thomas Azier's return marks an impressive development that sees the European songwriter delve further and dig deeper, creating a sound that feels cinematic, enormous and eerily emotive.

Take "Echoes", the lead track from the new EP entitled S T R A Y. It is, in part, an anthemic, guitar-driven track and in part an ghost-like exploration of Azier's most personal thoughts as he seemingly bounds across lightyears and the galaxy itself. It's accompanied by surreal visuals of a puppet that mimicks it's master, mouthing along to Azier's darkly beautiful lyricism that further exemplify commitment to his DIY vision.

As a stringently independent artist who continually does things on his own terms, Azier's vision is something to be admired and we caught up with the artist to find out more about the making of his latest project, the travels that inspired it and what it means to be confident in your own creative process.

BEST FIT: Your newest EP was written whilst you were traveling between cities – did any particular place have a more prominent influence over your songwriting and the direction of the songs?
THOMAS AZIER: "There is a book called 'The Radicant' which compares my generation to a strawberry plant. This type of plant roots everywhere it grows ending up with multiple shallow radicals. I feel related to this. The past 10 years I have lived in different European countries and I came to a point where I had to accept this way of living in order to enjoy working in ever changing conditions. This time I liked traveling with my computer and microphone to places that were quite foreign to me. By being on the move constantly I was able to invite the music to my head naturally and fluently. So even though places like Kyoto or Abidjan are magical, in the end it wasn’t so much these particular places that were of influence but more what this way of working did to my music and state of mind."

Why was S t r a y an appropriate title for this collection of songs?
"Someone very dear to me named it this way after hearing all the new songs. I guess it’s a feeling I’m familiar with. Not being part of a group, feeling like an observer looking in from the outside. Something I started doing quite early on when I moved to the countryside as a boy. It became a comfortable place for me to make music."

You wrote these songs on your own in hotel rooms – would you say that you’re someone who is comfortable with their own company?
"Hotel rooms sounds a bit too dandy because the reality of the situation was that I stayed in apartments or rooms I could rent for short periods of time. I think I’m pretty fine by myself especially when I’m working on various songs at the same time but at the end of the day I really need to be around great people and have a good laugh. It makes everything lighter."

You also lived between Paris and Berlin – what attracts you to these cities and do you have a favourite?
"Paris and Berlin are very different from each other. I still consider Berlin the city where I feel most at ease; there is less pressure. There is a certain freedom in Berlin that you can’t find elsewhere in Europe and I think if you are in your early twenties it’s a great place to start from. The downside is that it’s a city of people using it merely as a station in between towards their final destination."

Are there any other places in the world that you’d like to live or visit?
"Eastern Europe: Bulgaria, Slovenia, Ukrain, Poland."

Who is your biggest musical influence?
"Oh so many, I love artists like Scott Walker, Nick Cave, DAF etc."

You’ve remained as an independent artist, why is that important to you? What advice would you give to someone who wants to take the independent route?
"Well, I think for many artists there’s a bit of a misbalance between the way we make the music and the way we release it. I think the more knowledgeable and confident you get along the way the more you want to have a say on how the music is released as well. It becomes part of the creative process. You can’t complain about the business unless you are willing to participate. I think a lot of artists want to understand what’s going on but there’s a certain mystification of the business side as it’s often non-transparent. I think if you want to be there to stay it’s good to educate yourself with the same stamina you use in the creation process. The idea of a ‘rockstar’ who only cares about lifestyle and writing music is a bit old-fashioned."

“Echoes” is a huge sounding track where you can really hear a multitude of influences. Can you explain how you wrote this song and how it first came about?
"With the computer today you can imitate any genre and make it sound quite convincing. Often I end up with several versions of the same song in different styles & tempi. To me these ‘multiple truths’ are like colors and you are able to merge them once you created them. It’s a bit like painting maybe. Echoes started with the computer-keyboard controlled sample guitar which vaguely reminded me of some seventies glam. I liked that it was referring to something human but wasn’t quite human. When I decided on this sound, the song kind of wrote itself. The reverb comes from the main hall of the factory where Hylas was recorded. The choirs were done in Kyoto in a room and the dry hiphop drums I programmed in Paris."

How do you feel your sound has developed since your past two records Rouge and Hylas?
"I feel almost as if this is a new start. You can clearly hear the cities I was living in on the first two records. Now I feel they are part of my identity and I don’t really feel the need to emphasize them, or a specific sound that comes with the culture. For this record I wanted to have more fun and be more radical in production, make it more moody and sensual. The White Horses beat first reminded of early WuTang records... which I listened to while cycling to school in Friesland (NL) for kilometers. Having the cd-player in my pocket, I had to cycle with one stiff leg otherwise the music would skip."

What’s the next step for you as an artist? Is there anything you really want to do?
"I’m working on ways to release music (not only my own) at a steady pace on my Hylas label. I am also working on the liveshow which will be ready after the summer. I feel Stray is an living group of songs that is growing larger and larger and I don’t know where it’s going to end but more music is coming soon for sure! I am also developing what possibly will be the project released after Stray which is something I've been working on for years already. It's a more instrumental, conceptualized and visual project."