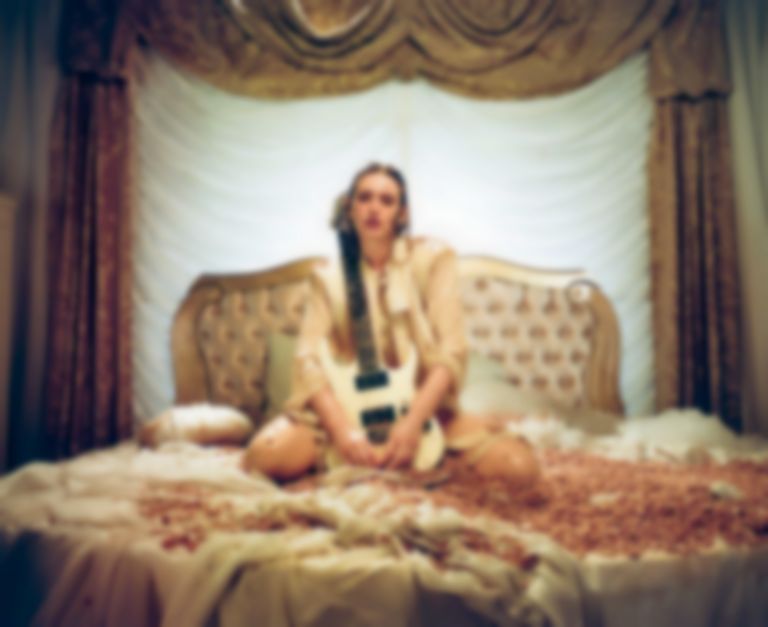 Number One Popstar, brainchild of multi-hyphenate Kate Hollowell, sharpens her larger-than-life, synth-addled pop persona while swiping at the all-consuming pull of product placement and star power on latest cut “TV”.

Arriving via Johnny Jewel’s Italians Do It Better label, the LA-based artist follows up riotously offbeat singles “I Hate Running” and “Forever 21” with a further dose of drolly deployed electro-pop panache, a drum machine-induced trip set to fizzy electronic static and searing guitar struts. A sensationalist send-up of vacuous obsessiveness in the modern age, Number One Popstar projects a flawless outer surface gleam while riffing on the inconvenient truths propping up images of apparent perfection.

Hollowell pairs her familiar pastel palette with lyrics focusing on how a desire for instant celebrity status can overshadow self-worth in a spiralling vicious cycle. “I wanted to capture and satirize our cultural obsession with fame,” she explains. “With new platforms and algorithms promising endless exposure and instant notoriety, we've created an existential crisis that's only alleviated by the constant approval and validation from strangers.”

The haywire, screen-smashing video sees Hollowell team up once again with Caroline Polachek collaborator DP Jordan Black in a maximalist display of high-life surrealism. Drawing direct inspiration from the infamously madcap film adaptation of The Who’s Tommy, a white and gold trimmed room yet again bears witness to bean-ravaged carnage, faithfully nodding to the original’s sense of jocular devastation.

“I'd recently watched the explosive and unhinged foam and bean scene from the 1975 rock opera by The Who called Tommy and instantly wanted to recreate it,” says Hollowell. “The film is absolutely insane (you can tell everyone was on a lot of acid) and visually it's an absolute dream. 'TV' was the perfect song to pay homage to this scene and I quite literally couldn't let go of the idea. For months I told people 'I want to shoot this bean sequence' and I'd show them the reference. Everyone's general reaction was the same; shock and disgust, which I loved.”

“There are a lot of parallels between the film Tommy and the storyline of the song 'TV'. One of the central themes of Tommy is the play between self and illusory self. In the music video, the character can only be happy when they're identifying with the illusory self they've created. For Number One Popstar, the fame seeking self is the illusory self. 'TV' is me outing my shadow and my desire to be known forever. But in the end, as a disgusting amount of beans pour from the television screen, we recognize that fame is an ugly, messy, empty and unfulfilling achievement.”

"TV" is out now via Italians Do It Better. Find Number One Popstar on Instagram.