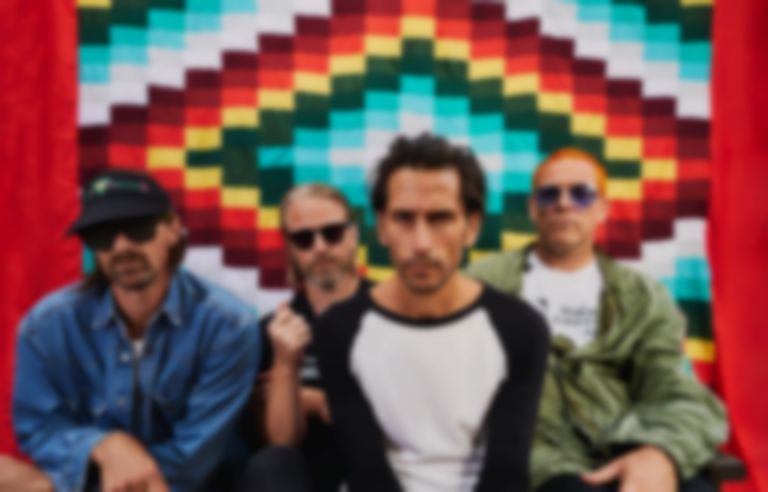 Like a tank rolling onto your lawn, Stockholm band Les Big Byrd are rumbling into place to release a new record. It's been a long time coming since their debut They Worshipped Cats in 2014, but Jocke Åhlund, Frans Johansson and crew have, after a troubled gestation period involving cramped and cancelled sessions, finally returned.

Their new album, Iran Iraq IKEA, a slogan Åhlund says he likes for its "subtly poetic, political intrigue", is out in October, and now the third single has arrived. "Geräusche", as you can probably guess from the title, is Krautrock-inspired and it shares that genre's air and momentum; a song that moves in highway motion and can imagine no limit closer than the horizon.

There's a kind of timeless quality to it - the synths, bass and drums lock into their groove, the vocals swap in and out with a piano line, and it feels like a song that could go on forever without outliving its welcome, filled with a sense of searching for freedom. Åhlund says: "It’s one of the more Krautrock-leaning tracks on the album. It’s quite spacey and chilled with a bunch of layered vocal harmonies and lush phased string machines, but a driving motornik style beat at the foundation. We recorded it with a combination of live drums, plus the same kind of drum machine that Kraftwerk used to use. The lyrics are inspired by a book I read called The Denial of Death [by Ernest Becker] which I probably misunderstood completely".

"Geräusche" is out on Sep 28, and Iran Iraq IKEA comes out on PNKSLM on Oct 12