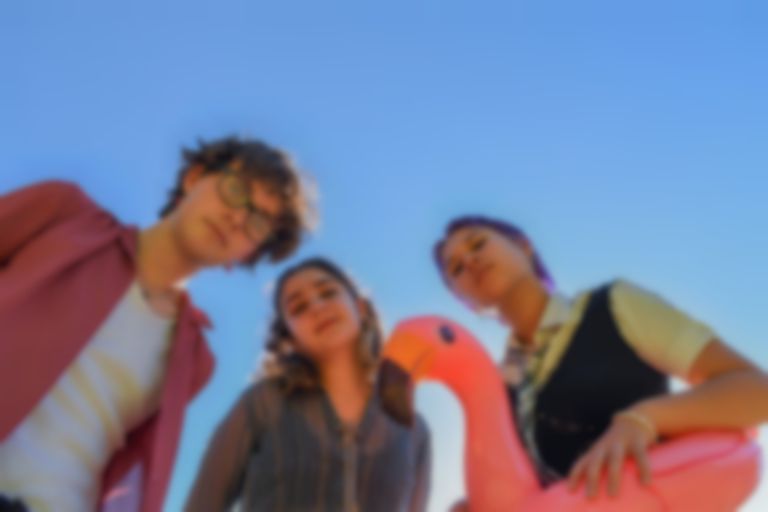 Combining traditional surfer-pop vibes with indie-rock rhythms, Flamango Bay - originally from San Fransisco - are back with their brand-new single, “LA”.

Inspired by the works of artists such as Harry Styles, Surf Curse, and Lady Gaga, “LA” is one of Flamango Bay’s most colourful works to date, dripping with an over-accentuated sense of self-confidence, starry-eyed optimism, and a hint of sunstroke. The song was one of last the band wrote before moving to the city of angels, a move which was weighted with expectation.

"Because of life circumstances and the pandemic, we really romanticized moving to LA," the band admits of the track. “We put a lot of expectations on the city to fix our internal problems. However, when we actually moved there, we were still the same people with the same problems."

“LA” is accompanied by a mind-bendingly shady music video, directed by Desmond O'shea. “We came up with a storyline loosely based around this drive from the Bay Area to Los Angeles, a journey we've been doing a lot recently,” the band recalled, "Ligaya Chinn (the protagonist) is moving to LA, and along the way gets a mysterious invitation to a party. Once she gets to LA, she meets up with us and, after taking in some iconic Los Angeles sights, she goes to the party. At first, it's fun, but when she goes to get water, she realises everything is not what it seems.”

“LA” is set to be one of five tracks included on Flamango Bay’s debut EP The Fool, releasing later this year. The project is inspired by the fool card in tarot, with the five tracks telling a tale of youthful naivety to the realisation of some life’s dark truths.

This theme is perhaps best exemplified by the previously released single “Fishing For The Sun”, which was written during band member Ikaika Gunderson gender identity crisis. “If not for these activists and people of marginalised identities normalising being themselves, we wouldn’t have had the groundwork to express ourselves and our art,” the band explained of the prominent genderqueer and transgender elements of the group’s local music scene that allowed them to explore feelings past generations would have felt too scared to touch.

“In a more general way we saw our psyches and emotional state about the pandemic reflected in the EP,” says the band. “We graduated high school in the pandemic, started college in the pandemic, moved to LA in the pandemic. All these monumental life events that were supposed to be joyous and exciting were overshadowed by this really depressing world event.”

“LA” is out now, with the debut EP, The Fool, set to release on 13 May via 0800-MOSHI-MOSHI. Find Flamango Bay on Instagram.