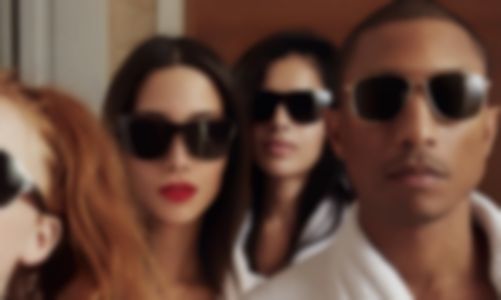 What’s the best cure for a BRIT Awards hangover? Corral a bunch of music journalists into a fuchsia-lit room, stuff them full of canapés and champagne, and offer them the world’s first preview of the new Pharrell album.

Once everyone is settled, sat in rows before a projection of the cover artwork- which, with its bathrobes and sunglasses, looks unfortunately like the flyer for a student club night- Pharrell joins us. Looking out from beneath the brim of his now ubiquitous Vivienne Westwood campaign hat, he takes his place on the sofa at the head of the room, Macbook before him. The label execs take it in turns to say their bit, and then he rises to his feet again and begins to talk about the motivation behind the album title, G I R L, taking care to highlight the two spaces in between each letter. It is, he says, a paean to “a phenomenal force in my life and in my career,” the “prolific and powerful force” of women and of womanhood. Inevitably, he wastes no time in addressing the “questionable lyrics” and “questionable values of aesthetics” that made ‘Blurred Lines’ one of 2013′s most played and, justifiably, most critiqued songs. Broadsheet and magazine columnists from all over Europe start scribbling.

He tells us that women are “the cornerstone of existence” and goes on to describe various dystopic scenarios in which women shut down the global economy and “end our species.” He certainly comes across as having more of a grasp than some give him credit on ideas of consent and what he calls a “spectrum of appreciation” when it comes to celebrating humanity. He explains that this record, only his second solo album after 2006′s In My Mind, came to life after he had been working in Paris with Daft Punk. “The robots are so cryptic,” he says of the French duo: he didn’t hear ‘Get Lucky’ before it was mixed for Random Access Memories, and at the time could scarcely remember what the song was called. What becomes evident throughout the evening is just how much the experience of working with “the robots” and with Nile Rodgers seems to have had an effect on this record- gone are the big band jazz orchestral stylings of In My Mind, in their place a grand disco funk. In between the songs played this evening, Pharrell seems oddly trepidatious, even awkward. When the tracks drop he is restless, dancing in his seat, thumping an air drumkit and singing along. It’s difficult to stay focussed and resist the urge to kick the chairs away and just get down alongside him. He is charmingly humble, but make no mistake: he is on to a winner here, and he knows it.

The album opener is where we meet the palpitating strings of the album trailer. Much of the album is underwritten, often quite subtly, by Hans Zimmer’s cinematic orchestrations, which drop here into a powerful, punching beat. Those masterfully simple Neptunes basslines are present, plus some offbeat disco guitars, as Pharrell dismisses Marilyn Monroe and Cleopatra in favour of a girl who is “different.” It’s apparent from the get-go that, even by the man’s impossible standards, this is a polished record. “I went so hard that it came true,” he sings.

Next up is the first featured collaboration, a duet with Justin Timberlake. ‘Brand New’ is pure Off The Wall Michael Jackson at the peak of his disco funk powers, with its carnal exhalations, falsetto harmonies and plucked bass notes that dance all over the fretboard before being carried away on rising horns and strings. Pharrell says the song “felt so urgent,” and it does, embodying the same surging breathlessness that both the King of Pop and JT brought to their best work.

Before playing this third track, Pharrell explains that “Hunter” is written from the perspective of an amorous woman ‘hunting’ him. When someone asks what this figure might look like, he says that we’ll have to wait for the release of the video to find out. The song moves into some intriguing post-disco, new wave synth funk, hopping on long-time N*E*R*D and The Neptunes collaborator Brent Paschke’s guitars.

By now, the room is struck by how powerfully each song so far has crashed in on its vigorous and insatiable beats, demanding attention and fanning the flames of our un-self conscious sedentary dancing. We’re treated to a little throwback line with the song’s hook of “Light that ass on fire,” but the solitary and sombre strings that rise trembling through the song are a far cry from Busta Rhymes’ metallic bounce. The song falls back into its disco beat to fade out over a buoyant guitar solo.

Pharrell almost doesn’t play the fifth track, his first platinum-selling single as a solo artist and the song that may well win him an Oscar next month. He’s ready to skip past it, knowing that we’ve all heard it countless times, but he bows to the will of the eager mob and presses play- a good thing too, as we realise how quite unlike the rest of the album it sounds, with its sunshiny choral harmonies and mischievously uptempo beat. What’s most interesting now is the way he talks about it: he says its origins lie in darker places, and that when working on the Despicable Me 2 score he scrapped nine drafts before settling on ‘Happy.’ He wanted to temper his usual fare of “sweat and booty shaking” with a song that would reinforce joy and felicity “relentlessly.” Let’s hope the Academy Award judges are susceptible.

The sixth track opens with clamorous marching percussion and a purring bassline, and yet more saucy breathy backing. The jangling guitars here lend it a more prominent dance-rock vibe. Ever the hardest working man in the production business, Pharrell lent his golden touch to four songs on Bangerz, and here Miley Cyrus returns the favour with some ably lustful backing vocals.

“Gust of Wind” is Pharrell’s “personal favourite” song on G I R L, and he likes it so much that he plays it twice, excitedly jumping back to the start before the first play-through has even finished. He tells us that this one features “the robots,” and that the punchy offbeat guitar comes from a young Canadian prodigy called Francesco Yates. It begins with zigzagging strings, and then that unmistakeable vocoder voice wraps itself around the climbing bassline and pumps mightily, nigh-on unintelligibly through the chorus. “Mothership Other cannot go away” sings Skateboard P, repping his new iamOther creative collective. By this point, it becomes apparent that the narrative personae that Pharrell embodies on these songs are somehow more Romantic than the libidinous paramours of previous outings, and they are all the sexier and more endearing for it.

“Lost Queen” rolls along on the warm hum of an a cappella choir, as Pharrell growls like a motor engine over tough and sharp percussion in what might almost be a calypso-inspired song. He takes a break to explain that both this track and Come Get It were mixed by engineer and four-time Grammy winner Jimmy Douglass, while the rest, unsurprisingly, benefitted from the touch of the multi platinum-selling former MJ and Quincy Jones collaborator Mick Gauzaski.

Next up is an interlude track, and the duration of the waves-breaking-on-the-seashore intro evidently requires some editing. As we sit drifting in unexpectedly lengthy ocean sounds, Pharrell delivers an impromptu recitation of Castaway, pining for his best friend Wilson. He makes a point of giving us the main lyric beforehand: “You gotta go inward to experience the outer space that was built for you.” Once we’re done with the waves we discover some enticing looped sitars and more introspective proverbs: “I’d rather be a freak if individuality makes life better.” It’s a song, he says, that he wants to have a “meditative vibe.”

This is what he refers to as his “soldiers’ hymn” for those closest to him, a warm and sincere duet with Alicia Keys, still riding that softly diffusive percussion. When asked about the collaboration, Pharrell says that Keys is “a fighter” and that she embodies the image of the song that he wanted to project.

The final song of G I R L is an ambitious one: Pharrell tells the room that he wants it to make listeners feel the same way he did when he first encountered A Tribe Called Quest, to be a kind of a baton-passing track that will inspire others in the same way that Q-Tip inspired him. It’s a song written with live shows in mind, and it counts on a funky breakdown decorated with dreamy, illuminative guitars, warping strings and chiming percussion to round off the record and play out on. Pharrell steps back and allows the synergic musicians of the record to close, striking up their exhilarating and airtight funk with pleasure, one last time, gradually fading out into a satisfied silence. The applause in the room is sustained, the appreciation enthusiastic; his thanks, genuine. Long after the majority of the attendees have left, the songs are played again to an empty room; the stragglers mingling outside the door, picking at the last of the vol-au-vent, can’t resist getting down one more time.