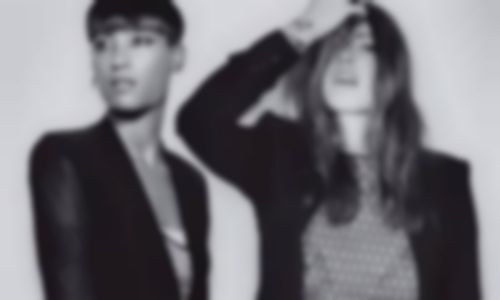 This week, Swedish duo Icona Pop scored their first Number 1, becoming the nineteenth Swedish band since ABBA in 1974 to make it to the top of the UK charts.

While Sweden has a central place in the music world – not least as a source of outstanding production and songwriting talent – there’s been a steady charge in the last eighteen months for savvy, female-fronted, progressive pop from the entire Nordic region. An army of talented musicians and singers are following in the footsteps paved for them by the likes of Robyn, Lykke Li and Niki & the Dove, finding an audience who crave a zeitgeisty sound that cocks a nod to the last three decades of urban music (and beyond) while never forgetting how big songs need to glitter explode the dance-floor too.

Maybe it’s also the organic side of the Nordic disposition – an emotive connect that bridges the gap between the synthetic and organic, whether the outcome be euphoric or melodramatic; passionate or tragic.

Riding along with the journey of Icona Pop’s ‘I Love It‘ – first released thirteen months back – we’ve seen the industry and public lapping up female-fronted music from Nordic shores in an unprecedented way. NONONO – who debuted their first release on our very own Best Fit Recordings label this month – got snapped up last week by Warner Bros. This November also sees the first ever Ja Ja Ja Festival take place at London’s Roundhouse, marking the biggest coming together of Nordic music the UK has ever seen.

The ten artists we’ve chosen below represent the best mix of the new talent currently coming out of that region. While Sweden continues to dominate as a centre of production, its close neighbours offer up their own innovative takes on popular music, bringing with them home-grown influences alongside foreign ones. These are the women who we think will changes the landscape for forward-thinking pop music in the next twelve months.

It’s early days for emerging Danish talent Mercedes Seecoomar. Raised in the infamous Christiania district of Copenhagen on diet of 80s hip hop, she was immersed in Beastie Boys and Public Enemy which was given a fragmented nod via last year’s ‘Airwave Hustler’.

The follow-up ‘Live in the Speaker’ sees a jarring early-90s Death Row production added to the mix alongside an utterly perfect lift from Eddie Murphy’s Coming to America.

The attitudal side of the young Dane is her trump card: it’s a liberal confrontationalism borne out of her upbringing and influences. She’s cultivating a fine pedigree too – collaborations with the like of Tim Powell (Girls Aloud, Sugababes), MNEK and Si Hulbert (Ceelo Green) mean we’re pretty excited about what might come next.

We don’t know a lot about Barcelona born, Stockholm-based singer-songwriter Sirena but she was signed by Noonie Bao for her 2ManyFreckles imprint with Universal, which can only be a good thing.

Debut release ‘Love is Not’ has shades of Lykke Li’s more melancholic work with a much greater pop sensibility that retains everything we love about Swedish production. An immaculate first step for a burgeoning talent.

Finnish duo Phantom have crossed our paths a fair few times in the last 12 months. They played the JaJaJa club night back in September 2012 and then graced our Record Store Day vinyl release in May with signature track ‘Scars’ – endorsed by The xx, who posted it for their fans.

Makers of an eerie, ghostly take on electronic pop, Hanna Toivonen and Tommi Koskinen bring with them an intellectualism and grasp of mood that we’re used to seeing from a lot of the exciting music coming out of Finland right now.

Toivonen’s vocal stretches between wispy, breaking rasps and a powerful restraint that hearkens back (perhaps via her Jazz studies) to the likes of Billie Holiday.