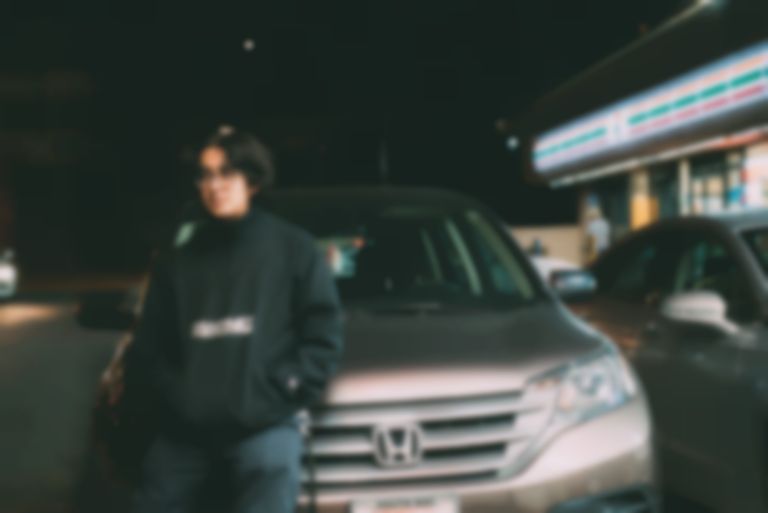 The L.A. singer/songwriter talks Sophie Walker through the songs that inspire him.

Omar Banos started a revolution from his bedroom.

The Chicano singer/songwriter wears his heart masted to his sleeve; his self-confessed sentimentality bleeds into his hazy, parma violet-sweet dream pop. It all began in 2016, when, under the moniker Cuco – having only just graduated from high school – he began posting 30-second covers. It was to be his take on the anthem of forlorn summer nights, ‘Sleepwalk’ by Santo & Johnny, guitar balanced on his lap with a metal guitar slide, that would see him in the eye of a viral storm. The artist behind that ‘Sleepwalk’ cover found meteoric success as the world stumbled upon his original material.

Cuco has become a lynchpin of the bedroom-pop vanguard, keeping company with the likes of Clairo and Billie Eilish, who are collectively redefining the industry as we know it. However, Cuco is far more than that, not only to the Latinx kids who have been systematically underrepresented on all fronts – but particularly so in the music industry. ‘Lo Que Siento’, a track which racked up no less than 45 million Spotify plays, captures the alchemy of sensitivity and sincerity in his Spanglish lyrics. “I promise I don't want nobody else to be around me but you / And nobody's touch and nobody's lips can make me feel like yours do / Our hands in a lock, nuestros labios se conocen / Nuestra noche es corta pero hermosa, we'll be okay”, are the words hundreds of girls were chanting at his gigs in basements and backyards. Cuco quickly became confirmed as the heartthrob they could take home to their mom.

Cuco has the distinction of being one of the few Latinx artists to have smashed the glass ceiling of segregated stages at festivals and mainstream disregard. He’s using his success as a platform to raise awareness about immigrants’ rights; he headlined the first ‘Solidarity for Sanctuary’, a benefit concert, standing in defiance against families being destroyed by stringent immigration laws.

The songs that have shaped Cuco’s trajectory are recent. Very few are associated with an enduring memory – but rather an enduring emotion. Some choices appear as shadows in his music, and other selections are unexpected: the furthest thing from his love-laden ballads. Here is an artist concerned with the here and the now. They are songs which, as a collective, have informed exactly what Cuco defines: infectious melodies, always charged with emotion.

"Reachin' 2 Much" by Anderson .Paak

“This is actually pretty recent. it came out about a month ago. I think it’s super funky and there’s this second transition which is so smooth.” The track, clocking in just shy of six minutes, is in several tiers of style and Paak’s signature low-key R’n’B is an influence which bleeds into many of Cuco’s own music. ‘Reaching 2 Much’ switches up the tempo frivolously from jazz arrangements to Motown grooves.

“I’m a huge fan of Anderson .Paak. I remember when I left high school and I heard his first album, Venice. I remember thinking, ‘Oh my god, this is insane!’” Omar confesses to having loyally seen Paak multiple times, from close to home and all the way to Coachella. “I think the overall vibe of this one is really sick. It was really groovy and it quickly became my favourite song.”

“‘Meet me at the CVS, I’m drinkin’ lean, we scoring.’” Omar sings, when the Germ track is brought up. “SHAMELESS’ is such a cool song. It was the only thing I’d listen to, for a while.” The Atlanta rapper isn’t the only one of the songs here that has close ties to $uicideboy$. Germ frequently collaborates with the hip-hop duo, who are at the forefront of the self-made SoundCloud generation and is one of a collective of rappers signed to their label, G*59.

“I just really love that whole scene,” Omar admits. Trap sensibilities, of trilling ad-libs and 808s meet with a chorus that he describes as having “an amazing melody”: something that’s always an instant hook for him.

“We Both Tried” by Tavares

‘We Both Tried’ is a devastating love ballad by the Cape Verdean-American group who pioneered multicultural music in the 70s’ and 80s’, a legacy Cuco has expanded on. “I’ve always been a massive fan of the band. Supercharged is such an emotional album for me, and this song in particular reflects the recent events in my love life, so it really hits home.”

Though the instrumental glitters, the mournful harmony of, “Ooh, we both tried / Everything, everything within our power / Then love died”, is a visceral hit that parallels Cuco’s own lovelorn lyrics. “The instrumentation and the rhythm of that era is so crisp and clean,” Omar says. “I’m a huge audio geek, so based on that alone, this song is sick.”

“Dude, City Morgue is sick!” Omar perks up enthusiastically. “Sick’ is the authentication tick of quality that he uses, which is a common denominator across his pivotal songs. “I listen to them so much. I fuck with metal, trap metal.”

It’s hard to reconcile with the idea that the artist behind the sleepy shimmer of ‘Lover is a Day’ is listening to the snarling trap basslines and barbed-wire vocals of SosMula and ZillaKami, but Omar explains, “I’m not a typical metalhead, but I love the heavier side of things, like these trap songs get. I just want to pull up to one of their shows and go crazy. I’d like to work with them one day.”

“They Always Take the Guru” by Stray from the Path

Perhaps even more unexpected still is the straight, unadulterated hardcore punk of Stray From The Path. The Long Island four-piece emerged in the early 00s’ and were a favourite of Omar’s when he was fourteen-years old. Whilst some of us might prefer to leave our favourite bands from fourteen firmly in the past, Omar stands by Stray From the Path.

“Their lyrics are crazy, for me, these lyrics correspond with how I was feeling at the time.” He quotes: “‘They always take the Guru / It should have been you / Now you’re gone with the wind, everything is still / I’ll stay here forever to watch what you’ve built.’ They were pretty intense, but when it’s played live, because it’s super heavy, it always goes off.”

“Ramirez is a good homie of mine,” Omar tells us. “He makes a lot of songs that are really chill, like cruising in your car songs.” Ramirez, another signee to G*59 Record$, taps into trap-inspired beats, layered with kept to a traditional Latinx, salsa-inspired signature. Cuco similarly draws on his roots to produce music that embraces sonic multiculturalism.

“I just thought this song was sick,” Omar says simply. “I’ve listened to Italian rap before, but that style was so different.” Mr. Oizo, a French electronic musician and DJ, is lauded for his synth-laden tracks and distinctive rasp, which bears a parallel with the vocal style adopted by City Morgue.

“The collaboration between Mr Oizo and Phra is another element that makes this track so good,” Omar continues. “I’d love to use this as a sample – it would really set a vibe. I have no idea what they’re saying, but this is amazing. The song really carries itself.”

Koba LaD is another native language musician on Omar’s list of favourite songs and like Cuco, the Congolese-French rapper, is also in the ascendant, with his pummelling basslines and seamless verses securing the artist a place on Def Jam’s roster.

“Koba was my way into French trap,” Omar explains, “my friend from Paris introduced me to his music. I think, much like ‘Dolce Vita’, this song proves that you don’t need to know what an artist is saying – the track can still be amazing.”

Soldier Kidd remains to be, as of yet, largely undiscovered by the hip-hop frontlines. “Even though this song goes in hard with rap verses, it still comes back to a really sick melody in the chorus,” Omar explains says – not at all unlike his own song, ‘CR-V’.

‘I Don’t Wanna Love’ sees Soldier Kidd’s vocal style take the lead, pitched and cartoonish, which offsets the feverish beat. Omar sings the hook, with the track proving its merit as an earworm. “This is one of those unforgettable songs for me.”

Cuco plays All Points East at Victoria Park, London on Sunday 26 May