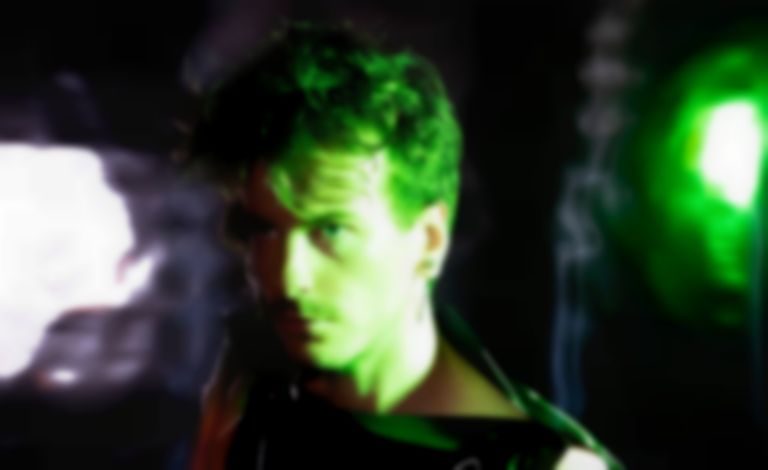 To mark the release of his new album The Destroyer - 2 and ahead of his London show at Heaven, TR/ST’s Robert Alfons opens up to Luna Cohen-Solal about the “morose music” that has soundtracked his life’s most meaningful moments.

In April Robert Alfons released The Destroyer - 1, a magnificent album of euphoric, danceable darkwave. The Destroyer - 2, released earlier this month, is its introspective counterpart, the Yin after the Yang. Just as hedonism and reflection complement each other, The Destroyer 1 and 2 are two sides of the same coin, hypnotic and emotional.

The Destroyer - 2 marks a significant departure from TR/ST’s sonic idiosyncrasies. It features unadulterated piano and classic drums, an audacious move for an artist known for their emphatic layering of synths and electronic beats. The record is moving, delicate and earnest - a description that can be applied to Alfons himself.

As we speak about the challenge involved in picking one’s most significant songs, Alfons notes a common thread between his track choices – all of them are “tied to special people.” He explains that songs get “lodged” into his life after a meaningul interaction with another person and then carry on existing in his private musical ecosystem.

Aside from an underlying sense of nostalgia, the overall theme in Alfons’ selection is brooding, emotional pop – “morose music” that adds meaning and comfort to the high and lows of life.

“Time For A Lie” by Pluramon feat. Julee Cruise

“A friend and mentor showed me this song. Julee Cruise has voice of an angel. That record is so incredible and this song especially, it starts the record too.

“It was integral to my first time falling in love, and the lyrics are so cheesy, but Julee Cruise can do anything. She’s saying, “It’s a wonderful time in our lives / You say I’m yours and you are mine.” It’s so sweet, there’s such a wave of warmth in this song, even on a technical level, with the fuzzy warm guitars and muddy kick.

“I first heard this when I was in my early twenties, I think I was 22, definitely a very important part of my life for music discovery. I still listen to it all the time, it’s one of the songs I listen to the most. The song is not always tied to that moment but it still moves me deeply. A lot of the songs that I have a moment with reinvent themselves for me.”

“I’m such a massive Burial fan. This may not be the best Burial song, but it’s the one that has the most meaning to me.

“I found that record at a time when I was in the depth and darkness of a break-up, and it was the beginning of winter in Toronto, which means no sun for six months. When I first heard that record, I’d never really heard anything like it before. It felt like finding some weird radio station frequency, and being one of three people tuning in to that radio that night. It felt very insular.

“There’s such a warmth to that dark period of my life, which was a difficult time. There is a line in that song, “I wasn’t good enough for you...”, it’s so powerful, mixed with the incredible, strange production. This song and this whole album were very comforting for me, it’s one of my favourites of all time. I was given this song by my friend and collaborator Maya [Postepski]; she knew I would love that record.”

“This is another one of the songs I’ve listened to most of all time, it’s so hypnotic. I first discovered it when I was 18 and I would sit in my tiny apartment at night and dream of falling in love. It was such an optimistic sense of looking for a deep connection.

““#3” is so simple, but it still baffles me on a technical level. It has very few chords, very few elements, and every element is so perfect.”

“The Sparrows and the Nightingales” by Wolfsheim

“When I first moved to Toronto I would go to these goth parties alone to dance, and I felt so alive and accepted - so many people would go alone and dance and be weird.

“I heard this song one night - I had no idea what it was and it was pre-Shazam – and I remember being lost in it and thinking, “This is the best song I’ve ever heard” while also thinking, “Remember these lyrics, because you have to remember what song this is, look it up and find it!”

“Being Boring” by Pet Shop Boys

“Pet Shop Boys are so good, and of all their songs, ‘Being Boring’ definitely has my heart. It was shown to me by a really dear friend of mine and this song has two deep meanings for me, one of which is connected to this old, dear friend of mine.

“I felt like the lyrics described our relationship. We had a determination to always have magic in our lives, regardless of how little money we had, or how freezing cold it was outside, or how uncool we were and how much we didn’t fit it. It was like, “We’re not going to be bored, we’re going to make magic happen.”

“So “Being Boring” was our anthem of sorts. It was a queer love story, and a queer marker for me, as the Pet Shop Boys were and have been from the first time I heard their music.”

“Tell Me You Love Me” by Carol Medina

“When I was younger I was so drawn to this 1995 Eurodance. My aunt, who is in an age group where she could be my older sister, was such a pivotal figure in showing me all of this dance music. She would listen to these songs at the gym, but for me it was so deep and so dark. I would be in her basement listening to this song on headphones and being in awe of all the different sounds, all of it.

“The songwriting drew me to this song. You could play this on a piano and I would be really captivated by it. As common in many of the dance songs from that era, it’s that riff, it’s so good. The lyrics really spoke to me, she doesn’t believe that the love is real.”

“Dazzle” by Siouxsie and the Banshees

“This song is so special. I love so much of Siouxsie’s music, but this one has my heart - the strings, the slow build up.

“I discovered this when I was eighteen, when I was living in New York and I would dreamily listen to this song while taking the cable car over to Roosevelt Island. You pass through all of the skypscrapers, I would always take it at night and this song was so important to me at the time.

“I listen to it all the time and I’m always in awe. When I put aside emotional things and break it down I wonder, “How does this song have such movement, such emotion?” You can dance to it, but it’s really not a dance song.”

“A Way of Life was the first record that I heard by Suicide, who are one of my favourite bands. I must have discovered them along with that whole scene, with Lydia Lunch and learning about all those artists.

“It was hard for me to pick my favourite song by them, but I tie this one to my first boyfriend and that whole period of discovery of intimacy and sexuality. He was such a music fan. We would go to shoegaze shows and there was a real sense of discovery. “Surrender” and the album A Way of Life were very influential for me.”

“This song makes sense in the sphere of my musical taste, and I definitely had to include something that was much more pop.

“Janet Jackson has been such a massive influence on me, and again, it’s not her best song, but it has my heart because there is such a sense of freedom and optimism that comes from this song.

“Escapade” is a cheesy pop song, but it makes me think of a time, years ago, and of all the people I was touring with at that time. There was such a sense of fun, and we had a small moment of having fun and being goofy. I think of it as such an integral and special moment in my life.”

The Destroyer - 2 is out now via Grouch/House Arrest