With the release of their new album, Brothers, on Monday, there wasn’t a better time to catch up with Dan Auerbach of The Black Keys. Whilst they were delayed in flying over to the UK due to Pat Carney feeling poorly, I fired over some questions relating to their recording process, their influences outside the obvious, and their thoughts on the MP3 revolution…

With all the projects you’re individually, and collectively, involved in, how do you decide which songs get covered by which project? Is there sometimes a bleed from one session to another, does one project inspire the next?
There is no direct bleed from one to the other. We start a project from scratch each day we go into the studio and we hardly ever work on any one song for longer than a day. With Blakroc it was start the song in the morning and finish it at night. Every song was done that way. No rapper got to take beats home and practice. They had to show up, hear the instrumental that we’d recorded earlier in the day, and write verses on the spot and perform them. I don’t think there’s ever been a hip hop album constructed in the same way.

How does working with Danger Mouse differ from working with other producers? You seem to enjoy working together, but he only produced one track on Brothers. Do you feel that sometimes you need the external influence or another view point? Are there any other producers you’d be keen to work with in the future?
We have not worked with many producers but we love working with Brian. More than anything, we have a great time hanging out when we are together. We get along. He’s like the 3rd brother. He’s like the older brother who’s sort of a bully. Like Chet from Weird Science. He knows how to bust chops. Chop busting professional.

A quick question on the Blakroc project – how did the sessions for that come about? How did you choose the artists to work with, or was it something more organic that had been gestating for a number of years?
Damon Dash called us out of the blue and asked us if we wanted to do something – anything… so, we said “how about a record”? and that’s how it started. We made a wish list of our favorite mc’s and he did the rest. It was an amazing experience. Dame is the dude.

What inspired the album title and cover art for Brothers? The cover is a little unorthodox!
We were inspired by lots of old text based album, book and magazine covers. It’s a weird thing trying to come up with an album cover but Pat’s brother, Michael, really killed it with this one. He did an amazing job and we love it.

Tell us a bit about the track ‘The Go Getter’. It lyrics bring to mind something from an Updike or Roth novel.
Life on tour is crazy. I’ve seen things. Terrible things. Help me… 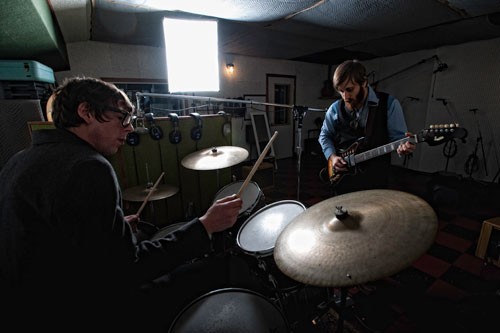 What was behind the decision to cover the Jerry Butler song ‘Never Gonna Give You Up’?
We both love Jerry Butler and have listened to him endlessly out on the road while on tour. The Iceman Cometh is a classic LP! Love that so much. “Baby don’t you understand…what you’re doing to the man?!” How could we not at least try to cover that?

Apart from the very obvious influence of the Blues, where else do you get inspiration from? Is it just older music, or are you influenced by books, films and other forms of art?
Hip Hop, books, magazines, Family Guy, Ultimate Fighting, really good noodle soups, YouTube videos of people getting tazed, and so on and so forth. We can find inspiration from anywhere really. Even listening to really shitty top fourty records can inspire us…to do the opposite.

As a live band, have you thought about adding to your line up in a bid to recreate your latest material more faithfully?
Yes we have thought about that and it might happen. That could be lots of fun.

Will we be seeing some Blakroc collaborations over the summer Festival season? Mos Def and yourselves are both playing Glastonbury for example…
I don’t know. The one thing we learned about working with hip hop cats is that you shouldn’t plan on them being anywhere at any certain time. Even if you planned with them the day before for them to be somewhere at a certain time. Pat and I are way too punctual to co-habitate in that world. Although, to be fair, Mos is a straight up dude. I really like that guy. He played on stage with Shuggie Otis – that’s nutty man!

What does the future hold for The Black Keys? Are you guys going to take a break after a very busy 12 months?!
Sleep is the cousin of death. So….I’m already working on other projects and the tour hasn’t even started yet. We get to do what we love for a living. It’s ridiculous. I’ve never had a real job! I worked at a record store once when i was 16. I’m useless really.

And a final question – do you think the internet is harbinger of all evil, or something that’s amazing and needs to be embraced? What do you think about the mp3 revolution and the issues with albums being leaked on the internet, sometimes months before they’re officially available?
I know that if somebody downloaded our record illegally and then didn’t buy it in stores or talked shit about it to somebody I’d crack their head in if i saw them on the street. Is that what you mean by an mp3 revolution? Do you know what the top three internet searches are in America? I’ll tell you – naked girls, music, and cats. In that order. I know what I think about the internet – now you be the judge.

The Black Keys: ‘Tighten Up’