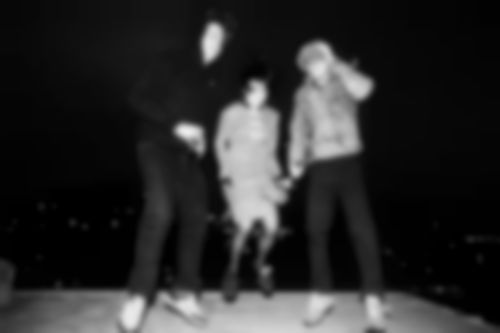 You know how when you watch a big TV finale, a Big Brother or X Factor or something, and at the end they do those epic tear-jerking montages reminiscing on the last six weeks? We don’t really do that in music. We make lists at the end of the year, for sure. But so much falls by the wayside and becomes forgotten.

Screaming Females were one of the best bands I saw last year and their album Castle Talk spent many an afternoon ringing through my ears. They would totally be in my 2010 montage. In fact, the only reason it’s taken me until 2011 to talk to them is because they were too busy driving themselves across Europe.

If you managed to catch them on any of the dates you’ll likely have felt just as elated as I did by their crushing delivery, careering riffs, and Marissa’s voice reverberating through whatever venue’s fuzzed PA. This is why I rang Mike, Marissa and Jarrett down an irritatingly intermittent phone line and cut and paste my own little montage below.

Hello Mike. For anyone who doesn’t know Screaming Females, give us a little background.

We’re called Screaming Females because it’s an image that can be unique to anybody, make whatever you want out of it. Personally, I think of a Beatles concert, you know, tons of screaming females. So it’s whatever you make of it.

Over five years we did two albums that we released ourselves, and two albums for Don Giovanni Records, most recently Castle Talk that came out back in September. We don’t have an official European release of that record though, so this is a call to any European labels that want to put out our record. It’s a fabulous record. We’ve toured a lot for five years now and we’re best friends.

How was your European tour?

Oh it was great, it was so much fun I can’t believe how well it went. I didn’t expect anybody to attend any of the shows having never been to Europe before but we showed up and there were people there and everyone was excited wherever we went and they treated us really well and we made some friends and we can’t wait to come back.

Before you went on tour, what was the one place you were looking forward to playing?

Well, being Italian Americans from New Jersey we were really, really excited to get to the motherland. I dunno, I’d never been to Europe personally, Jarrett had travelled around a bit but I was excited to go. I knew almost nothing about all the places we were going to, prior to going there, but I was just excited to take it all in, whatever I could between playing shows, sound-checking, everything that goes along with touring but still trying to be the best tourist.

And now that you’ve done it, what was the best place you played, the place that either lived up to your expectations or took you by surprise?

Well, clearly Cardiff. We absolutely loved it there.

Actually, Marissa’s uncle asked me couple of days ago what my favourite place was in Europe and I didn’t even take the time to think about that because it was all so new to me and it was all so amazing. Each place had its own special thing about it and that’s a hard question to answer. I’m gonna give the phone to Jarrett now. Here he is…

Hello. So I heard your question, where was your favourite place thing in Europe? And it took me by surprise – I have an even better answer.

We drove ourselves all around to keep costs down and at the end of that tour, we’d toured for four months straight so we were all going a little bit crazy but I think Mike actually lost it while we were driving in Norway.

We were upset about how cold it was and their highway systems are not really as required as the rest of the worlds as I guess everyone there takes trains. So we were driving on this road and Mike decides to pass a car really slowly and this truck comes around the corner, hurtling towards us on this icy road. And we’re like “Oh, Mike has to get back in the other lane now”, but instead he takes the time to consider whether he should just wait and he decides at the last moment that he does have enough time and he should speed up now.

So we’re just driving faster towards a truck hurtling at us on the icy road, and he starts laughing hysterically and we start screaming and trying to jump out of the van. I put a blanket over my head because I didn’t want to see myself die. We made it, luckily, we barely made it and Mike was laughing this hysterical laughter as he pulled away, and we decided he wasn’t allowed to drive again. I told most people when we got home about that story.

I think I’d lose my mind if I saw a camel standing by the side of the road. How was the new record received over here, even though it’s not out yet?

I mean generally, our whole history as a band we’ve just undertaken whatever we could ourselves and not gone out begging other people to do things for us. Although we didn’t have an offer for a European release yet we wanted to get one so we hooked up with a pretty good booking agent in Europe and we had a good time working with him so we thought we could do it.

Obviously it would have been better if we had a label, but we decided to just go over there and see what would happen. And yeah, we sold a couple of hundred copies of the record all over Europe… So our record is distributed through us in Europe.

Let’s talk about the new record. Did you record it yourselves?

Marissa: We recorded it at a studio in New Jersey that I work for so the engineer who owns the studio and myself did a lot of the groundwork, like putting microphones up and plugging things in other things. Everything was really a group effort, just asking everybody does this sound great and all that jazz until we were satisfied.

I mean, I think there are a lot of things about the record; the way the sound quality is, the sonic quality of the record faced a lot of challenges. In light, it might not have come out exactly the way everyone would have liked it to, but it came out. And it sounds cool for what it is, so we were pretty happy once it was all said and done.

I think it sounds great. What don’t you like about it?

Me, personally, I wish the drums were louder. But I’m pretty happy with it. It sounds cool. It’s my favourite sounding record out of all of ours, so that’s a plus. It’s always good to want something different because then you can try again, there’s always something to work towards.

With the next record, will you try and do it yourself or go to a producer?

I guess it depends on who it is if we hired a producer, but that would be very weird. I don’t think we’ll be going back to that studio just because we’ve already done two there. It’s good to try something new. I’d like to try and use a really nice studio and see what kind of sounds they could come up with. I mean, it’s a long way away so I’m not gonna think about it right now.

Yeah. Nobody likes to be told what to do, especially when it comes to your art, if you dedicate your life to it. You don’t want people compromising what you know is right so we’ve always done things the way we see fit.

It’s working out. For the past two years I’ve been able to live off being in Screaming Females. I’m really grateful that we are able to do what we do, especially in an economic climate like this, to live as an artist is kind of really out of the ordinary. And hard.

What your future plans are, as in for the next few months? Will you be writing new material, continuing to tour this record? Any plans to come back to the UK?

Jarrett: We’re at a very ambiguous time for the band right now. We’ve toured relentlessly for about two years and released two albums and a singles collection (and Marissa’s solo album, Noun – Holy Hell) in quick succession. So we’re basically waiting for a cool offer as far as touring. Heading out again right now on a headlining tour without a new record would be pretty useless. We’re hoping some amazing people in an amazing band will ask us to play shows with them. Sitting around and waiting like this isn’t something we’re used to. Also, we haven’t had real jobs in more than two years because we’ve been able to make ends (barely) meet by touring constantly.

So with no touring prospects in our immediate future we’re starting to have to look for day jobs. This makes things even more difficult because it ties us down to home, which makes it harder to be available for the shows and tours we want to be doing. It is honestly a very tough situation. One big plus of being tied down to home is that we are able to practice and write new songs. We’re never able to write while on the road. We’ve only really written about two songs in all of 2010 which sucks. But, just yesterday we had our first practice in four months and we are all so full of ideas that I think we will have dozens of new songs in the works very quickly.

We want to get back to Europe this spring but the money/ job situation might not allow it. We will have to see. If not this spring than definitely in the summer or fall.