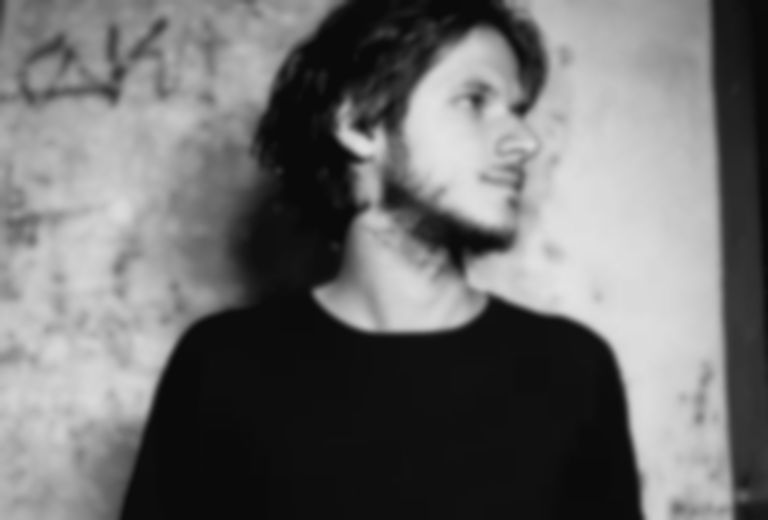 Back in 2013 Rubel Brisolla was a twenty-one year old film student in Austin, Texas living in a co-op with a hundred fellow pupils. When we speak, he’s fresh off stage at Lisbon’s Super Bock Super Rock festival, grinning from the thrill of playing his idyllic latino-folk to an audience of new fans. “I’m 28 already” he tells me with a look of shock.

Brisolla never expected to be working as a musician, and he still has grand designs for his creative future from writing a novel (he’s two months in) to continuing to direct film and videos.

His most popular video on YouTube is for “Quando Bate Aquela Saudade”, a touching, cinematic dip into the lives of a disparate cast, it ends with a taxi driver breaking into streams of tears. “That was real!” exclaims Brisolla. “He was actually crying. It was so funny coz when we were rehearsing he said, ‘look I’m an actor but I cannot cry on camera on cue’. And I said, ‘OK do your thing, I trust you and let’s see what happens’. And then two minutes later he’s actually crying so truly and hard and he’s weeping and screaming, it was so real. And it’s so funny because he didn’t even believe he could reach that emotion.” Over the past four years the video has clocked up an impressive thirty-eight million views.

And it was on YouTube where things started for Brisolla. Studying at the University of Texas, he was inspired by the weird creative blood that flows through Austin. “The music scene is very, very strong and there are so many bands” he says. “It’s a great city. That was really important for me, that sense of freedom and weirdness and to allow the weirdness in me to grow and get out of myself and not be ashamed of my weird part. And I felt like that inspired me and gave me the courage to write music and record music.”

He rented a load of gear, set up his own home studio, and recorded his first record, Pearl, with no expectations. “I felt like that whole environment of music and freedom and youth and experimentation, that inspired me to record my first album there. I recorded seven songs and it was very, very unpretentious because it was just for me. I wanted to record that experience, I wanted to take that with me for my life, but I didn’t really expect to have a career or play in a festival like this. I just wanted to take that memory with me.”

The record itself is seven tracks of layered instrumentation and vocal harmonies which takes as much from his home latino melodies as from US Americana rounds and acoustic guitar. It has the spirit of early Sufjan Stevens, but with a warming innocence.

Uploading the album to YouTube, Brisolla forgot about it, finished his studies and moved to LA to pay his dues in the film industry. But in 2015, something happened. Over two years music fans in Brazil had begun to share the record, and slowly Pearl went viral. “I had a miserable job in LA working as an intern in four different production companies,” laughs Brisolla. “I did script coverage, because I wanted to be a writer. I still want to be a writer and it was a shitty job and I hated it and I was so depressed and so sad and then I started realising that in parallel at the same time, shit was going viral in Brazil, and I thought what am I doing here? The universe is telling me I should pursue music.”

He headed home, formed a band, and the rest is history in the making. “It’s still so surreal to me that this is my life right now,” he says, shaking his head. “That I can make a living and I can play twenty shows a month and that I actually have a big crowd in Brazil. This is so surreal!”

Speaking of his musical progress to date, he certainly still seems to be discovering just who and what Rubel can be. “I feel like the first album is very casual and unpretentious and very young and childish and I feel like the second album is more mature and it comes from an understanding that I am a musician and that’s what I want to make. I really want to make something that’s relevant, and interesting and provocative and mixes with different genres and I feel like it was a step forward for me, and for Brazillian music in a way, and I hope that doesn’t sound pretentious.”

He’s not sure if the music will translate overseas, especially outside of Portuguese speaking countries. Nor is he sure if he wants to try and write in English. He says, “I feel like my music really connects with people because of the lyrics, mostly. I played in New York, I played three shows and the crowd was mostly Brazillians and I felt like it was really hard to connect with the Americans because of the language barrier.”

Not that he needs to look overseas. Brazil is a big country and one that’s keeping Brisolla more than busy. “I feel like the cycle of this album is gonna last for six more months, to the end of the year, and then I wanna stop coz touring is insane. It sucks, people don’t talk about that. It’s annoying, it’s depressing, it’s sad. But I discovered something recently, that I don’t have to take early planes anymore. It took me four years to discover that and my life has gotten so much better,” he laughs.